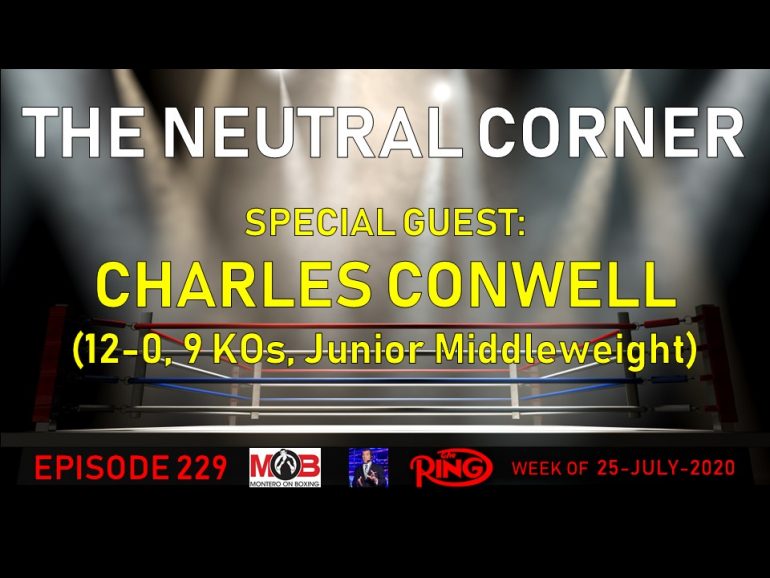 The 2016 Olympian was slated to face undefeated Kazakhstan native Madiyar Ashkeyev on a ShoBox card in April, but that fight was put on the shelf during the COVID-19 quarantine. Conwell told The Ring he is not bound to fight on any one particular network and is willing to face anybody in the 154-pound division, but he singled out two specific names.

“I see things in the styles of Jeison Rosario and Patrick Teixeira that I can exploit,” he said. “And I know that they’re new champions. They don’t have a lot of championship experience so I feel like I could capitalize on that if we were to fight.”

Conwell also spoke on his fight against Patrick Day last fall, which led to Day collapsing in the ring and tragically losing his life days later. Although the situation was difficult and others would’ve been hesitant to return to the ring, Conwell says he couldn’t wait to get back. “Boxing is therapeutic to me,” he told The Ring. “It gives me a clear mind. I really had to just get back to the gym. Without boxing I was just depressed, just laying around, moping in my sadness.”

Although he doesn’t have a fight on this schedule at present, Conwell says he expects to hear from his management soon.

Montero also discussed the tragic death of Travell Mazion (17-0, 13 KOs). The 24-year-old prospect died in a multi-victim car accident on the night of July 17, just outside of Austin, Texas. Boxing writer Marc Livitz, who lives in Austin and visited the scene of the crash, called in to give his thoughts. Livitz covered the Vergil Ortiz Jr vs. Antonio Orozco card last August in Grand Prairie, Texas. On that night, Mazion honored the 23 victims of the El Paso mass shooting that had occurred a week prior. The Austin native walked to the ring with no music, asking the crowd to join him in a moment of silence.

“I had never seen anything like that,” Livitz said, “to make the ring walk about everyone else, rather than yourself. You could hear his footsteps as he walked into the ring. It was just timeless.”

After reviewing dominant wins by Mikaela Mayer and Felix Verdejo from inside “The Bubble” in Las Vegas, Montero previewed the schedule for this week, which includes a great match up between Oscar Valdez (27-0, 21 KOs) and battle tested veteran Jayson Velez (29-6-1, 21 KOs), as well as the return of Vergil Ortiz Jr.

One caller, Mark from Ireland, questioned why some fans are being critical of the choice of opponent for Vergil Ortiz Jr (15-0, 15 KOs), who faces Samuel Vargas (31-5-2, 14 KOs) this Friday on DAZN. “Sammy gave Amir Khan a nightmare fight,” he said. “He dropped him, he hurt him. Sammy is proven, he’s a solid, mid-tier level gatekeeper. I’m excited to see Vergil back, I think he’s the goods”

@40:23 Reviews of wins by Mikaela Mayer and Felix Verdejo.