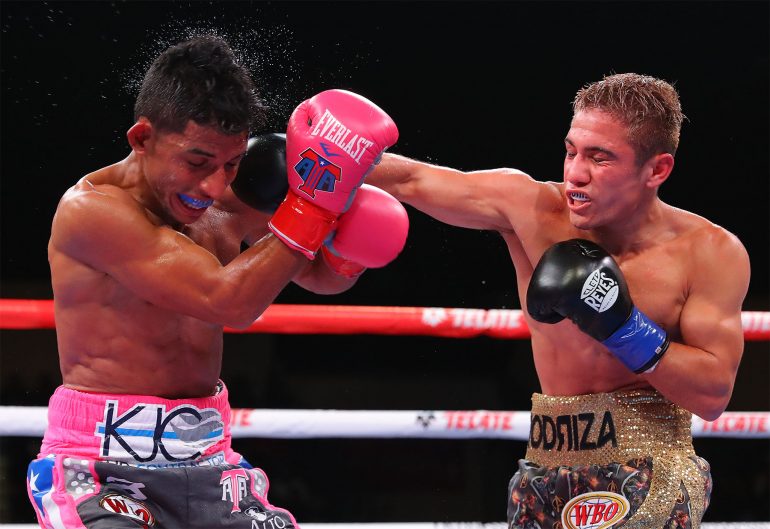 INDIO, California – Elwin Soto is the latest fighter in 2019 to pull off a significant upset win.

Down on the scorecards, Soto stopped Angel Acosta in the 12th and final round to win the WBO junior flyweight title.

Acosta was making the fourth defense of the WBO title. Acosta told RingTV before the fight he was not overlooking Soto, but believed that his experience would be the deciding factor.

WOW! Soto stuns Acosta and the ref stops the fight! ?

Do you agree with the stoppage? ? pic.twitter.com/VunSCM0Wbq

After two competitive rounds, Soto swung momentum moments into the third round when a lead left hook followed by a right cross from dropped Acosta to the canvas. Acosta was still on wobbly legs as the action resumed, but did enough to hold on to Soto while he recovered from the knockdown.

Soto hurt Acosta again in round four, landing a right hand to the head that wobbled the Puerto Rico fighter. Soto went at Acosta in an attempt to force referee Thomas Taylor to stop the fight, but Acosta was able to hang on.

By the middle rounds, Acosta was in control, throwing and landing multiple combinations to the head and body. Soto was relegated to throwing one punch at a time, whether it was a hook or cross to the head.

A combination from Acosta stunned Soto midway through the 10th round. Soto was able to hold on and withstand the barrage of punches Acosta landed to make it through the round.

Entering the 12th round, Acosta went on the attack, backing Soto against the ropes. A lead left hook staggered Acosta backwards, with Soto following up. Although his arms were up in a defensive position, referee Thomas Taylor abruptly stopped the fight at 23 seconds to the protests of Acosta.

Soto was emotional after he was announced as the winner.

“I’ve always dreamed of this (moment),” said Soto. “I worked hard and I gave it my all. I thought I was going to lose the fight, but I was fortunate to land that punch to hurt him. This victory (and title) means a lot to me.”

Acosta had a different outlook of the result.

“I’m disappointed with the stoppage,” said Acosta, who had his four-bout winning streak snapped. “I was fine. I thought I should’ve used my jab more. I told the referee I was fine. He shouldn’t have stopped the fight.”

Junior welterweight prospect Luis Feliciano broke down gatekeeper Fernando Carcamo before stopping him in round seven.

It was all Feliciano (12-0, 8 KOs) from the opening bell, as he landed the more-telling blows. The southpaw Carcamo, who was a finalist of the 2014 Boxcino lightweight tournament, attempted to keep Feliciano off of him by attacking the body, but it had little effect as Feliciano’s higher volume of punches and accuracy won him the rounds.

A combination during the last 30 seconds of round four stunned Carcamo, sending him back against the ropes. Feliciano, who resides in Milwaukee, let go his hands go, battering Carcamo until the bell sounded to end the round.

Carcamo looked tired with each passing round. Feliciano’s body attack dropped Carcamo’s punch output. The end came in round seven as a barrage of punches from Feliciano forced Carcamo to take a knee. Carcamo’s corner threw in the towel, prompting referee Ray Corona to stop the fight at 2:16.

“He was a little slower and tough and he took my shots,” said Feliciano after the fight. “When I threw punches, he countered to the body. I was patient and took my time breaking him down. The important thing was I got the win.”

In the opening fight of the DAZN telecast, welterweight prospect Blair Cobbs stopped Robert Redmond in the fifth round.

The southpaw Cobbs (11-0-1, 7 KOs), who resides in Las Vegas, was the aggressor from the opening bell, throwing and landing lead and counter hooks and crosses to the head of Redmond.

Cobbs dropped Redmond midway through the second round, courtesy of a right hook to the head. Redmond beat the count, but took some damaging punches to the head until the bell sounded to end the round.

By the third round, Redmond’s right eye was beginning to close, likely from the punches from Cobbs. Redmond fought back and was successful in the pocket, but was still vulnerable from the amount of punches Cobbs connected.

Sensing Redmond was weakening with each round, Cobbs attacked the body more. After Cobbs landed a barrage of punches, Redmond’s corner threw in the towel, prompting referee Thomas Taylor to stop the fight at 1:52.

Welterweight prospect Aaron McKenna dropped late-sub Daniel Perales (10-18-2, 5 KOs) of Mexico once to a second round knockout. McKenna (8-0, 5 KOs), who is originally from Ireland and now resides in the Los Angeles area, dropped Perales in round one and battered him early in round two until referee Ray Corona stopped the bout at 42 seconds.

Junior featherweight Anthony Garnica dropped Gilberto Duran (3-3, 3 KOs) in the opening round en route to a one-sided victory. All three judges scored the bout 40-35 in favor of Garnica, who goes to 3-0, 2 KOs.

In the opening bout of the Golden Boy Promotions card, super middleweights Emilio Rodriguez (3-1-1, 2 KOs) and Clay Collard (1-1-2) fought to a majority-decision draw. One judge scored the bout 40-36 in favor of Rodriguez while the other two judges scored the bout 38-38.