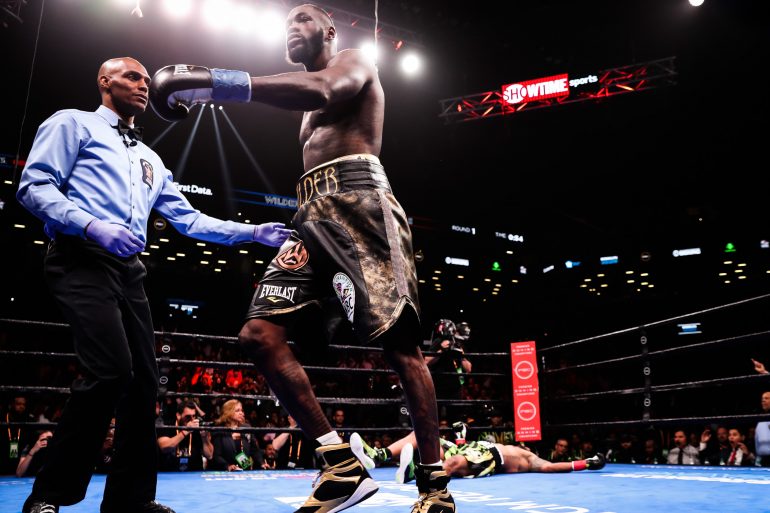 Photo by Amanda Westcott/SHOWTIME
23
May
by Michael Woods

The manufacturing process of Deontay Wilder into becoming the top draw in the game, if not in arenas then on PPV platforms, continues. As part of that, the fighter himself shows himself to be a work in progress as a sports entertainer.

And whereas one MIGHT think the WBC heavyweight champion might capitulate to norms of behavior and political correctness, not so, not in regards to his stance of admitting he’d not be displeased if he killed Dominic Breazeale in the Brooklyn ring in which they squared off on May 18.

During fight week, the 33-year-old hitter with the rubber-band man power told media that he craved a body to his record, that he’d like to punish the challenger in fatal fashion, because they’d beefed in an Alabama hotel lobby back in 2017. Breazeale had stepped over the line with his threats, so, Wilder declared, he wanted payback, above and beyond pugilistic lines.

Now, after Wilder (41-0-1, 40 knockouts) got the job done, dispatching Breazeale, now 20-2 (18 KOs), with a right hand that didn’t just land – it detonated – in round one, you might have thought the Alabama boxer would dial back on the controversial hype talk.

No way, shape, or form. On the “Inside PBC Boxing Show,” Wilder was asked by hosts Kate Abdo, Shawn Porter and Abner Mares about the “craving a kill” talk. Wanna walk it back, he was asked, in so many words?

“Like I said before, I’m passionate about what I say, and I’m passionate about what I do, or I wouldn’t be the realest champion in the business.” He said because Dominic threatened his family, that draws consequences. “I don’t regret nuthin’ I said, my actions spoke louder than my words, and that’s all that matters. It’s boxing, it’s a fight. If people can’t handle boxing, I think you should probably do another sport…I’m gonna speak my peace, and that’s the end of that, thank you!”

Abdo followed up–she and that drew indeed do a good job in asking pertinent questions, for the record– though; did he expect the media and fan blowback to the kill talk?

“When I say things, people get butt hurt about it, so many sensitive, butt hurt people in the world. Like I said when I tweeted, the one thing I can’t stand is a sensitive, butt hurt type of person. You know…words hurt, of course it does, but I don’t care what anything thinks about it. I don’t care about what no one thinks, nor what they say or how they feel. Everybody tune in just to see me do what I said I was gonna do, that’s the crazy part about it. You gonna criticize a man, but you tune in, I just wanna see if he gonna do it. Man, get outta here, especially with these times of day we live in, man, I don’t wanna hear anyone talking about, You shouldn’t be…I do me, you do you, and enjoy the show.”

Man has a point. If you or I are so turned off, we can tune out.

But that said, I stand by my stance: he shouldn’t talk about wanting to kill someone in the ring, because it’s too harsh, too over the top, and that stuff can stay in WWE. We are a reality based sport, and he can make impact without going over that line.