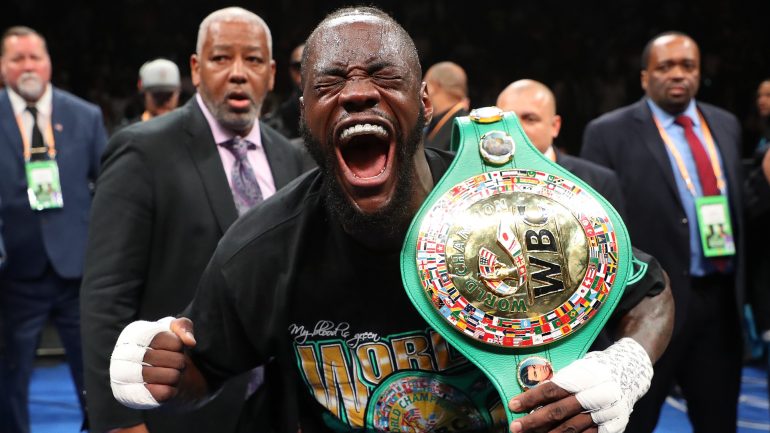 19
May
by Sporting News

Deontay Wilder promised a highly anticipated fight against Anthony Joshua would happen, but he called for fans to remain patient.

Wilder needed just 137 seconds to knock out Dominic Breazeale and retain his WBC heavyweight title on Saturday, improving his record to 41-0-1.

The American drew with Tyson Fury in December and there were calls for a rematch with the Brit or bout against WBA, IBF and WBO heavyweight champion Joshua.

Wilder – whose knockout of Breazeale was the 40th of his career – said a fight with Joshua would happen, but he remains unsure when.

“We know when the big fights happen everything is going to be silenced. There’s too many people involved, too many opinions involved right now.

“It’s going to take my team and his team, maybe me and him as well, to sit down and hammer this and squash everything and get this fight done for the fans.”

Wilder added: “This fight will happen. The big fight will happen, I promise you that, with patience, come time, and I just want you guys to have patience and give us a little time to make this thing happen so we all benefit from it, not only just you fans.

“We risk our lives in here so we want to make sure we get the best and the most money that’s possible.

“We’re risking our lives. The head is not meant to be hit in the first place so let us get our time to iron out all the differences and you guys will know when that happens.”