NEW YORK — That didn’t take long at all.

Deontay Wilder got his mandatory title defense out of the way in a hurry, putting Dominic Breazeale down for the count with one right hand to the chin in the first round Saturday night at Barclays Center in Brooklyn, N.Y. 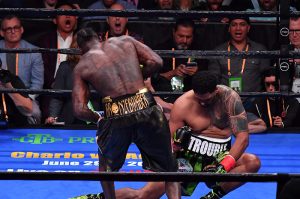 There goes “Trouble.” Wilder prevented Breazeale from warming up by knocking him cold. Photo by Damon Gonzalez

Though the fight lasted just 2:17, there was some back and forth action, with Wilder hurting Breazeale with a right hand and backing him to the neutral corner. Breazeale was disoriented but still had enough physical strength to swing wildly and land a right hand on Wilder that made him take a step back. Wilder regrouped, and after finding the right distance, put Breazeale on his back in front of an announced crowd of 13,181.

“I saw him slow up a little bit. When I hit him with the right hand the first time his body language changed. When you’ve been in with so many  guys you can recognize body language.”

Breazeale (20-2, 18 KOs) rose to his feet at the count but was unsteady and slumping towards the ropes, where he was held up by referee Harvey Dock to prevent him from falling back down. Still, he disputed the stoppage, insisting he picked up the count at seven and could have continued.

“I got on my feet and had my legs under me. It’s the heavyweight division so there’s going to big shots from guys with power,” said Breazeale, whose lone prior defeat came against Anthony Joshua in 2016.

It was a conclusive end to an ugly build-up, which saw Wilder make headlines for comments that included saying he wanted to “catch a body” and warning that Breazeale’s life was on the line in a literal sense.

There was no hint of that bad blood in the aftermath as Wilder and Breazeale, both former U.S. Olympic representatives, hugged and showed each other mutual respect as the crowd oohed and ahhed while replays of the knockout punch played overhead.

“I just told Breazeale I love him and of course I want to see him go home to his family,” said Wilder. “I know we say some things, but when you can fight a man and then you can hug him and kiss him, I wish the world was like that. We shake hands and we live to see another day and that’s what it’s all about.” 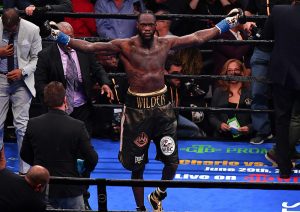 Wilder soaks in the adulation from the thrilled crowd inside Barclays Center. Photo by Damon Gonzalez

The knockout, which made for Wilder’s ninth successful defense of the WBC heavyweight title he won in 2015, helped remind fans of his destructive power following an inconclusive draw against Tyson Fury, who resurrected his career, and himself, by getting off the canvas twice to befuddle Wilder in Los Angeles.

Tonight, there would be many fewer missed punches, resulting in a brief televised triple header on Showtime Championship Boxing.

With his mandatory defense out of the way, and the other two leading heavyweights, Fury and Anthony Joshua, scheduled for fights in the U.S. in the coming weeks, what’s next for Wilder?

Naturally, it’d make most sense to see what happens in Joshua’s title defense against Andy Ruiz on June 1 at Madison Square Garden, and Fury’s debut with Top Rank against Tom Schwarz on June 15 in Las Vegas, but Wilder sent a big message to the division, and set a precedent that the proceeding combatants will be hard-pressed to follow.