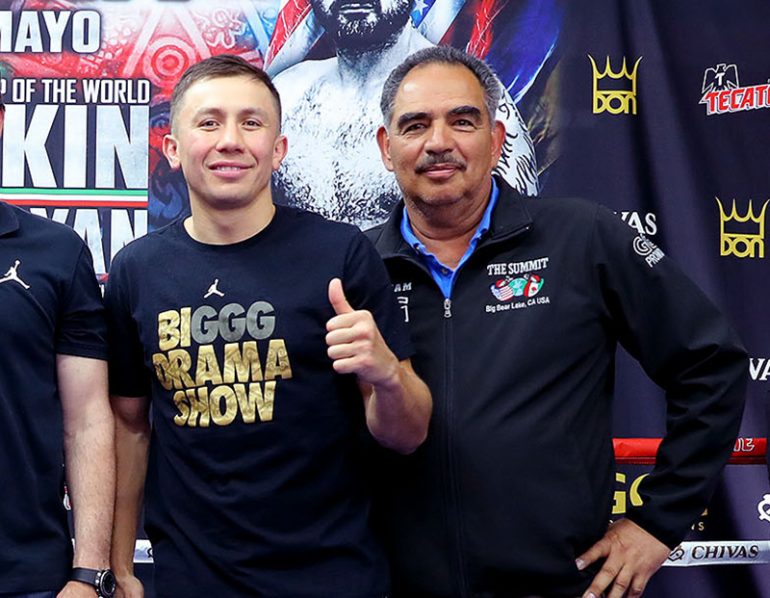 A day after ending the two-city media tour for his next fight, Gennady Golovkin announced on social media that he is splitting with long-time trainer Abel Sanchez.

Golovkin (38-1-1, 34 knockouts) had just made appearances in New York and Los Angeles for his June 8 fight against Steve Rolls at Madison Square Garden, but it appears now he’ll enter battle without Sanchez in his corner.

“I would like to announce that I have made a major decision for myself and for my career. I want to build on what I have already achieved and continue to better myself. Therefore, I will not be training with Abel Sanchez. This was not an easy decision for me and it is not a reflection on Abel’s professional abilities. He is a great trainer, a loyal trainer, and a Hall of Fame trainer,” Golovkin, 37, wrote on his Instagram.

Sanchez, who had first risen to prominence in the 90s as the trainer to Terry and Orlin Norris, first began working with Golovkin in 2010 after the 2004 Olympic silver medalist visited his gym in Big Bear, Calif. Golovkin had stopped by the gyms of Freddie Roach and Robert Garcia, among other gyms, before settling on The Summit.

Sanchez was not at either press conference the previous two days. A replacement for Sanchez is still to be announced, the statement continues.

“I will be announcing my new trainer at a later date. But today, I want to thank Abel for the lessons he taught me in boxing.”

Sanchez suggested a less amicable nature to the split, saying in a statement that the split came down to finances after Golovkin signed a new six-fight broadcast deal with DAZN.

“He proposed and insisted on an insulting new trainer compensation schedule, my dignity and honor does not allow me to be screwed like that,” said Sanchez. “It’s unfortunate being greedy, being ungrateful and no ethics, honor or integrity will end this relationship.”

The fight against Rolls will be Golovkin’s first since the lone defeat of his pro career in the second meeting against Saul “Canelo” Alvarez last September, and will also mark the beginning of the DAZN deal which Golovkin hopes leads to a third meeting with the Mexican star.

Together, Golovkin became unified middleweight champion – missing just the WBO to become undisputed – and earning him a spot on the pound-for-pound list. Sanchez’s career peaked to new highs, culminating in him being named BWAA Trainer of the Year in 2015 and becoming an in-demand coach, earning him jobs with Murat Gassiev and Joe Joyce, the latter of whom also left Sanchez earlier this month.

Sanchez dismissed concerns about his fighters’ recent losses last September in a Reddit AMA, saying that his fighters have a 92% winning percentage at his gym, and noting that Gassiev’s loss came in the World Boxing Super Series.

“If we put Gennady on such a pedestal that we expect for him to dominate everybody the way he dominated earlier in his career, then we’re being very demanding of somebody to be the same thing in every fight,” said Sanchez.