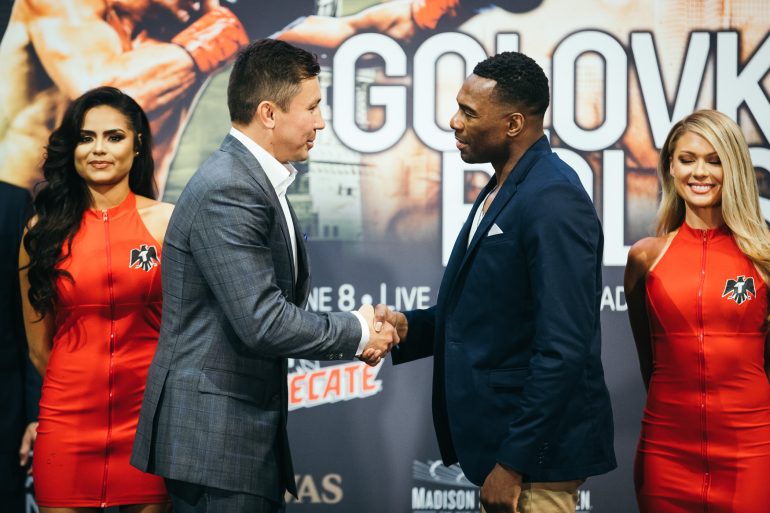 NEW YORK — It isn’t often that you look up at a name on the Madison Square Garden marquee and ask “who?” That’s the situation Steve Rolls, the unbeaten fighter who got the call to face Gennady Golovkin on June 8, finds himself in. Rolls admits even he was surprised to find out he had been selected for the opportunity, considering that he was virtually unknown outside of his native Canada, where he isn’t exactly a household name either.

After a decision and a draw in two fights against Canelo Alvarez that he insists he won, Golovkin finds himself on the road to reclaim that which he believes rightfully still belongs to him. After years as feared champion, rebuilding isn’t easy. Marvin Hagler never even hit the punching bag again after losing to Ray Leonard. Bernard Hopkins, another long-time middleweight champion, left the division behind following back-to-back losses to Jermain Taylor but found success at 175 pounds.

Golovkin has no immediate plans to move up and isn’t retiring. First on his agenda is Rolls.

“I don’t know much about him,” said Golovkin at Monday’s press conference, aligning himself with most of the boxing public. He recalled that Rolls was undefeated and that he used to train at the Kronk Gym.

“If it’s his name that came up then I’m sure that he is a worthy opponent.”

As Rolls entered for the press conference, promoter Lou DiBella made light of the public’s dismissiveness towards his chances, saying “Apparently you have no hope and you might as well not even show up.” But DiBella says Rolls has never been a loser, and says he’d been in the gym the last three months before getting this fight.

How did Rolls (19-0, 10 knockouts) land the fight? It didn’t hurt that at least four other opponents – Hassan N’Dam, Kamil Szeremeta, Maciej Sulecki and Brandon Adams – didn’t materialize for various reasons. Also, DAZN, which will stream the fight live on its subscription service, wants the fight to boost its Canadian subscriptions.

Basically, it came down to the fight being presented to Rolls and Rolls saying yes. Rolls, a 35-year-old from Toronto and an eight-year pro, has put his day job as a personal trainer on hold for this fight, motivated in part because he recently became a father for the first time.

Picking Rolls – or any fighter south of the division’s pinnacle – is done for the sole reason of allowing Golovkin (38-1-1, 34 KOs) a chance to remind fans of the man who had stopped 23 opponents in a row before Danny Jacobs and Alvarez revealed the Kazakh fighter to be a mere mortal. And in a sport where you’re only as good as your last fight (see the Danny Garcia praise after thumping Adrian Granados), you’re always one big KO from being hot property again. 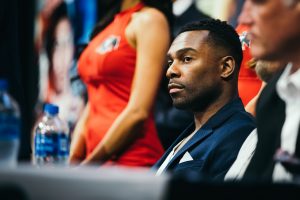 Rolls’ pro record doesn’t inspire fear, with his biggest win being a split decision over the respectable Demond Nicholson, but he competed internationally as a member of the Canadian national amateur team, and earned the respect of the late Emanuel Steward through sparring at the Kronk against Adonis Stevenson and Andy Lee, and also worked with middleweight titleholders Billy Joe Saunders and David Lemieux plus Glen Johnson.

Still, he deals with detractors.

“I wasn’t calling out Golovkin, I wasn’t saying ‘I deserve Golovkin more than this guy or that guy.’ The opportunity came to me and as soon as I took the opportunity I got shit on for it,” said Rolls, who feels Golovkin won the first Alvarez fight and lost the second, though both were “razor thin” close.

“I understand that the fans want to see Golovkin in there with certain names and I’m relatively unknown outside of Canada. But this is the situation I was dealt and I look forward to capitalizing on this.”

With DAZN’s monthly rate doubling from $9.99 to $19.99, you can’t blame the fans for wanting more. Golovkin is locked in for six fights and Alvarez signed the sport’s largest ever contract for the next ten fights, so it’s expected that Golovkin will eventually get a chance to right those perceived wrongs, provided Alvarez gets past Jacobs in two weeks.

Golovkin brushed aside Alvarez’s condition that Golovkin have a belt of his own before they face off in a trilogy.

“We’re not gonna look at what he’s demanding such as a title. I’m hoping to fight him, title or not,” said Golovkin, now 37.

“That third fight with Triple G and Canelo is still one of the biggest fights in the sport of boxing and that’s a big reason why Gennady signed with DAZN, because that’s the clearest path for that,” said Golovkin’s rep Tom Loeffler, adding that he believes it’s just posturing from Alvarez and his promoter Golden Boy Promotions for future negotiations.

One point of contention for rematch discussions is that Golovkin’s camp isn’t interested in fighting in Las Vegas again, with Golovkin saying “we’ve seen Vegas’ true colors.” Loeffler says that the fight should take place at The Garden, considering that Alvarez showed he could draw on the east coast after packing the house against Rocky Fielding – who was vastly overmatched – last December.

The Golovkin-Rolls fight will be fought at a non-title catchweight of 164 pounds, and Golovkin says the Voluntary Anti-Doping Association (VADA) will oversee testing for the fight.

Gennady Golovkin (@GGGBoxing) says there will be @Vada_Testing for his June 8 fight against Steve Rolls: “I believe in clean fighting…and I want everything to be fair.” pic.twitter.com/mmeMRO8xY7

The lack of buzz is to be expected for a so-called confidence building fight, but Golovkin doesn’t feel the need to build his confidence back. He says he’s never lost it.

“The judges’ decisions did not necessarily affect me because inside I feel like I won those two fights. I don’t see myself as a contender, a beginner again. I’m moving on with my camp and I’m training a certain way, my fights will show,” said Golovkin.