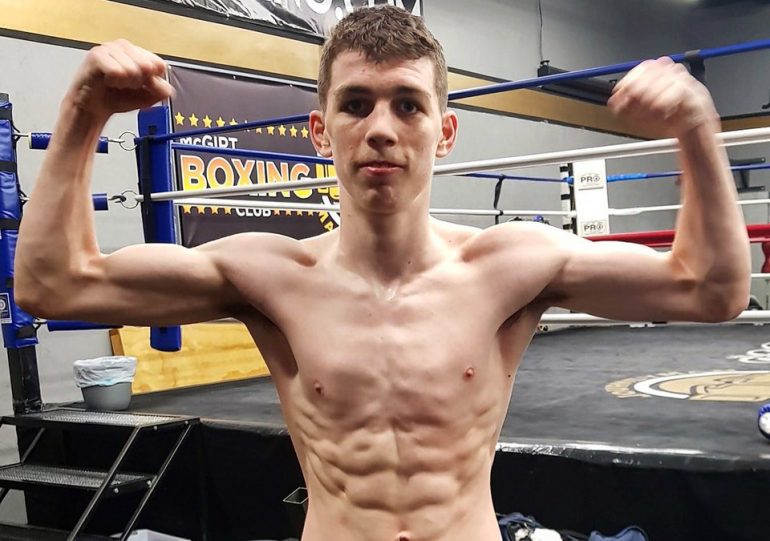 Chances are good that the 6-foot junior welterweight will have a busy 2019, and he’ll likely be featured on a live stream or televised undercard sooner rather than later. After all, McKenna – “Stevie” to family and friends – is following in the footsteps of his younger brother Aaron, who has already become one of the more touted young prospects of the Golden Boy Promotions stable.

Stevie, who takes a more aggressive approach than his sharp-shooting brother, is somehow able to make 140 pounds and figures to be a beast at the weight. 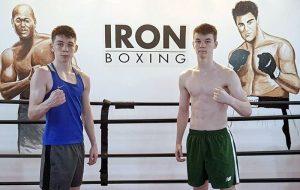 Stephen (left) and Aaron McKenna at the IRON Boxing gym, which is owned by their co-manager Ken Sheer.

“He’s much stronger at junior welterweight than Aaron is at welterweight,” Fergal McKenna, father of the County Monaghan brothers, told RingTV.com during a recent workout at Buddy McGirt’s Gym in Northridge, California. “He hits harder than Aaron. He’s got man strength. Aaron is still growing.

“Stevie has been training alongside Aaron here in California for an entire year and he’s shown experience beyond his development. He’s yet to have his first pro bout but he already fights like a pro.

“Their trainer, Courage (Tshabalala), has been working with both on sitting down on their punches.”

Tshabalala, a former heavyweight prospect from South Africa, is part of the Sheer Sports Management team, which guides the careers of the McKenna brothers.

The heads of Sheer Sports, Ken Sheer and Lyle Green, love what they’ve seen and heard of Stevie’s gym work.

In January, he sparred with Jose Zepeda at Wild Card Boxing Club to help prepare the talented junior welterweight contender for his February 10 shot at WBC titleholder Jose Ramirez. In February, he and Aaron made weekly trips to Maywood to spar with the Molina brothers, Oscar and Javier. Aaron sparred with Oscar; Stevie sparred with Javier, a 2008 U.S. Olympian and former welterweight prospect.

The brothers’ home gym is McGirt’s, where they train Tuesdays and Thursdays, but they’re in search of quality sparring Monday, Wednesday and Friday, and they usually find it at Wild Card in Hollywood, Legendz Gym in Norwalk or at the Maywood Boxing Club.

“If the action dries up in those three spots, we’ll drive all the way to Oxnard,” Fergal said. Last year Stevie sparred with Vasiliy Lomachenko at the Boxing Laboratory in Oxnard to help prepare the pound-for-pound king for his lightweight unification bout against Jose Pedraza.

“Stevie’s been sparring with top-tier fighters like Lomachenko and doing a great job,” said Sheer. “There’s no question in my mind that he’ll be a multi-division champion. He’s the real deal.”

Green, a former boxer, is impressed with the aggressive style of the amateur star who compiled a 155-24 record and earned gold medals at the Commonwealth Games (2015) and the Irish Elite Senior tournament (2016).

“Stevie is an exciting old-school boxer-puncher who comes forward and isn’t afraid to mix it up with the best fighters in the world,” said Green.

“He’s been patient waiting for his pro debut. It’s finally time and we are optimistic that he will have a very successful career.”