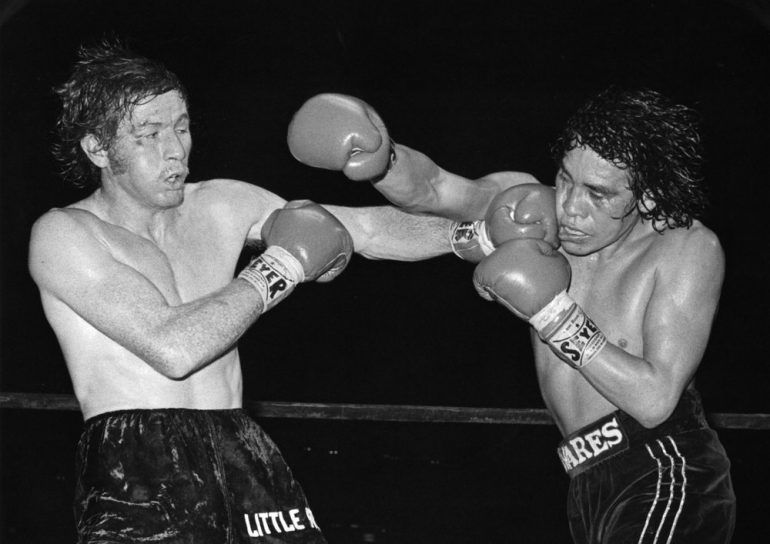 The hugely popular Danny Lopez was featherweight champion for over three years in the late-1970s, making eight successful defenses, only to lose the title to the legendary Salvador Sanchez.

Lopez was born in Fort Duchesne, Utah on July 6, 1952, of mixed Ute Indian, Mexican and Irish heritage. He had a difficult childhood and was taken into care when he was eight years-old.

“My father left my mother with eight kids and the state took the three youngest ones. I was one of them,” Lopez told RingTV. “They placed us in foster care. I lived with different aunts and uncles in Utah on the reservation.

“My brother Leonard boxed in the Marines and my brother Ernie boxed at Stans Boxing Club. It was because of them that I wanted to box. I took it up when I was 16.”

During a his amateur career, Lopez won regional Golden Gloves tournaments and estimates he had around 50 amateur contests. He migrated to Los Angeles and turned pro in 1971.

He became a popular local attraction over the next couple of years, regularly fighting at the Olympic Auditorium and, later, the Forum. His older brother, Ernie, was also a talented boxer who twice unsuccessfully challenged Jose Napoles for the welterweight title.

Other than a bad spell from 1974 into early 1975, when he lost three of four, including a war with Bobby Chacon, Lopez won all his bouts. He had beaten four-time world title challenger Chucho Castillo (TKO 2), former 118-pound kingpin Ruben Olivares (KO 7) and seasoned contender Art Hafey (TKO 7).

Those victories set him up to challenge and win the WBC title in the fall of 1976.

“Probably winning the (WBC) featherweight title over in Ghana, Africa, from David Kotey, that was my proudest moment,” Lopez said. “I had to run at 4:00 a.m. morning; it was hotter than heck over there. The people were nice. I think the people thought he was going to beat me.

“When they announced I had won the title, you could hear 15 Americans stand up and cheer for me out of 100,000 people in the soccer stadium.”

His most notable defense was a hellacious war with Mike Ayala. It took place in his challenger’s backyard of San Antonio, Texas. “Little Red” dropped Ayala twice before stopping his rival in the 15th round in The Ring Magazine’s “Fight of The Year” for 1979.

In early 1980, Lopez yielded his title to Sanchez in a terrific all-action encounter, in the 13th round. They met in a rematch that summer. Lopez again tried to use his methodical pressure to break down the Mexican, who was able to outbox him and stop him in the penultimate round.

“Salvador was a smart fighter,” he said of the 27 frenetic rounds he shared with Sanchez. “He could move; he could punch. I never could hit the guy. He was a special fighter.”

Lopez retired before making an ill-advised one-off comeback that ended in defeat, leaving his record at (42-6, 39 knockouts) In 2010, Lopez was inducted into the International Boxing Hall of Fame.

Lopez, now 66, is married to Bonnie; they live in Chino Hills, California and have three sons and six grandchildren. He enjoys playing in golf tournaments, going for walks, watching movies and using Facebook.

He graciously took time to speak to RingTV about the best he fought in 10 key categories.

BEST DEFENSE
Sanchez: That would be Salvador Sanchez again. I never could hit him. If I could have landed a shot on him, I might have knocked him out but I couldn’t land a shot on him.

BEST FOOTWORK
Sanchez: That would be Salvador again. He could go back and forward. He was always moving and I could never hit him.

BEST CHIN
Ruben Olivares: I never hit Salvador so I don’t know if he had a good chin. Ruben Olivares was one of them. He had a pretty good chin. He knocked me down and came in for the kill and that’s when I hit him with a sharp right hand and I won the fight.

SMARTEST
Sanchez: Salvador was the smartest I fought. He had a lot of movement. He was able to do things others weren’t able to do; he set traps.

STRONGEST
Chacon: I hit him with some mighty good shots and they never fazed him and he came back with his shots.

BEST PUNCHER
Chacon: Ruben Olivares was one of the hardest punchers I fought. I felt every shot he landed on me. Also, Bobby Chacon was a good puncher. I’d probably pick Bobby.

BEST OVERALL
Sanchez: He was so sharp and he’d be out the way before I could land on him. I fought him twice and he beat me twice.