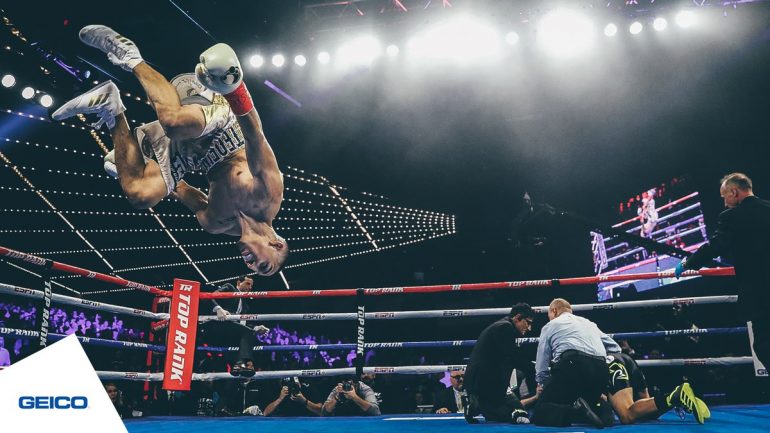 The knockout of the year may well have happened at the Hulu Theater at Madison Square Garden, on Saturday night. Teofimo Lopez’ chopping right hand on the chin of Mason Menard had Menard’s neurons scrambled so severely, he tensed up and pitchced face face to the mat.

Everyone breathed a sigh of relief when after two minutes he was helped to his feet and he exited the ring. Just 44 into the match, Lopez got the W, but the buzz on the kid was heavy duty right off the bat. A couple bombs he landed thumped so hard they could be heard in every corner of the theater.

Lopez, born in Brooklyn, living in Las Vegas, went to 11-0, and Menard, the Louisiana-based fighter, went 34-4. He’d been stopped by Carl McNickles, Ray Beltran and then Devin Haney. This one was maybe the last one, because who needs this sort of brain trauma?

In the first, the winner with the trunks stitched with “Brooklyn Made” landed filthy rights. They sounded nasty. Menard pitched face first, and was twitching when the filthiest landed.

But of course, Lopez did his requisite backflip and Fortnite dances.

“It is the Takeover, the Takeover has begun,” he asserted to ESPN’s Bernard Osuna after the assassination attempt. He said he’s on track for a world title attempt in 2019; yes, he thinks, no, he KNOWS he will win, no matter who the foe it.

Brian Ceballo rose to 6-0 with a W over Daniel Calzada (from Denver), slipping to 16-20. The welter Ceballo, fighting out of Brooklyn, and promoted by Tom Loeffler, is advised by Split T (David McWater). He looked relaxed as heck, in a good way, and the scores were 40-36, times three.

Alexander Besputin went to 12-0 with a victory over JC Abreu (now 21-5-1), from the Dominican Republic. The scores: 100-88, times three. “Still the USBA welterweight champion!”

The lefty from Russia, now living in Oxnard, California, sent the loser to the mat, off a right, in the first. The match got ugly, grappling and fouling, in the third. In the fourth, we saw the active on his feet Besputin and the loser and the ref fall to the mat, in a heap. Abreu fired a shot at a downed Besputin—not off a knockdown— and the ref then warned both men for chippiness. Besputin is a darter, he explodes in on a foe, and he was taking rounds with this manner.

In the sixth, Abreu stayed cautious and was more mindful of not getting whacked by a power launch. In the seventh, Besputin stayed aggressive, used his legs throughout the frame and won the round. In round eight, Besputin got a knockdown. Could he finish? Not in the round….To 9; Abreu ate a couple LOUD right hooks, but rolled with them enough to take away some sting. In the tenth round, the judges were needed, because they finished the frame.

“He fought a very uncomfortable, dirty fight, but I dominated. I am ready for a world title fight next,” said the winner.

Abel Sanchez trained Rome, Italy heavyweight Guido Vianello met Luke Lyons from Kentucky in a scrap set for six of fewer. In the first, we saw Lyons’ short arms hurt him. Or, his gut…because his high guard ended at his lower rib cage, Guido whacked his gut and ribs easily. Guido had fun, bounced, and then sent Lyons to the mat. He was up at 8. Then the bell rang, saving him. For a spell…Down he went in the second, and the doc said no mas, as the count of ten was reached. 29 seconds had elapsed.

“It was a dream come true to make my professional debut at Madison Square Garden. I hope I did Italy proud,” the winner stated. “I came here tonight to score a knockout, and I delivered.”

Down went Renteria, off a right hand high on the head in the second. He got up and looked to move more, because he’d been getting basted. Vargas in the second was warmed up and comfortable and having fun. In round three, we saw Vargas working in retreat, finding a comfy spot and then rip shots. The he’d switch it up, get aggressive, push in off the back foot, try to lead with heavy duty launches. Renteria sought to be the aggressor in the fourth, to start the round. The winner sent the loser to the mat at the end of the round, and then the bell rang. Renteria was all done to start the fifth, though; the end came at 31 into the fifth. The TKO was overseen by Eddie Claudio.

In the opener, journeyman Abdiel Ramirez went to 25–32 with an upset eight-round decision over former contender Michael Perez (24-3-1).

Perez hit the mat in the first and then sort of routed the ship. Ramirez didn’t come to lay down, he was slinging it and making the Newark, N.J. boxer work. In this, his first fight of 2018, Perez traded, to the delight of the fans who made the early open. Down went the winner in the fourth.

The final round was the eighth in this super lightweight tango….Perez and Ramirez both landed hard and clean and are advised to move their heads more in the future. Two right uppercuts dropped Perez at 55 elapsed in the eighth, via TKO.

Bob Arum convened with Kathy Duva and Yvon Michel to hype the Feb. 2 Texas showdown, to run on ESPN, between Eleider Alvarez and Sergey Kovalev. Sergey said he’s now being trained by Buddy McGirt and will regain his light heavy belt.

Arum also trotted out Bulgarian heavyweight Kubrat Pulev; the dealmaker said Pulev will fight for a crown in 2019. John Wirt and Ivaylo Gotzev are repping Pulev, mandatory challenger for Anthony Joshua’s IBF title, who will fight TBD in March. Arum wants to build up his profile in America. The fighter is looking at trainers, maybe Kenny Adams or Ismail Salas.