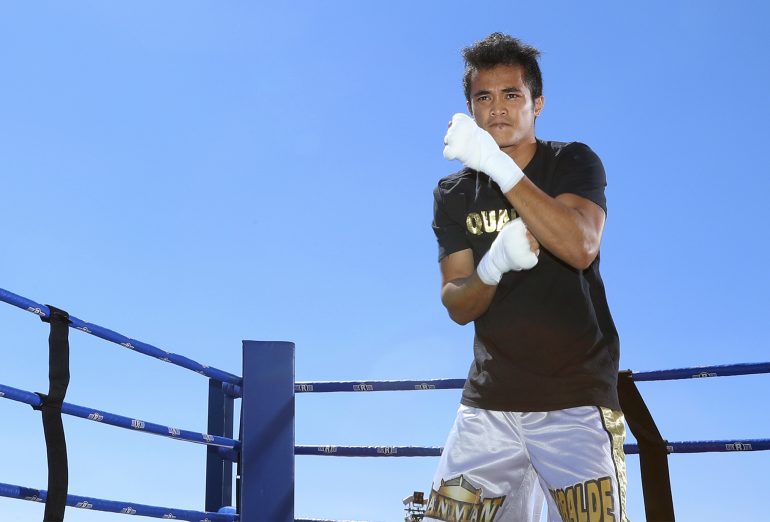 John Vincent Moralde boosted his stock in his last fight at Save Mart Arena. Now he looks to make it 2-for-2 in Fresno against Jamel Herring. Photo by Mikey Williams/Top Rank
13
Sep
by Ryan Songalia

Last December, after John Vincent Moralde was stopped in seven rounds by Toka Kahn Clary, there was little outpouring of grief or lamenting about his ineffectiveness that night in Rhode Island.

“It was a different atmosphere; it was really quiet,” remembered Jim Claude Manangquil of Sanman Promotions. “Maybe because Moralde and I know that he could do a lot better than that.”

Moralde, then an undefeated fighter from Davao City, Philippines, had been based in Miami at the time, sitting out of the gym for two months after a fight in Russia had been cancelled.

“I became a fat boy because I eat a lot and no training,” said Moralde (20-1, 10 knockouts). Then he got the call to fight, and had a month to drop from 148 pounds to the featherweight limit.

It made sense that the perception heading into his most recent fight, an eight-round meeting with unbeaten Ugandan Ismail Muwendo this past May, was that he was damaged goods there to be defeated. Instead, Fresno became the city where Moralde rediscovered his confidence, and Muwendo seemed to discover what a left hook looked like, with Moralde scoring two knockdowns to win the unanimous decision.

After beating one training partner of Terence Crawford, Moralde will try to beat another one when he faces Jamel Herring on Friday, September 14, once again in Fresno in the co-featured bout before Jose Carlos Ramirez defends his WBC junior welterweight title against Antonio Orozco.

Whereas Muwendo was straight-up and there to be hit, Herring, a 2012 U.S. Olympian and, like Clary, a southpaw, is a craftier fighter when he wants to be and throws much crisper punches in combination.

After losing two of three fights to Denis Shafikov and Ladarius Miller, Herring (17-2, 10 KOs) left Al Haymon to sign with Top Rank and began training with Brian McIntyre. Herring also dropped a division to compete as a junior lightweight.

Moralde is also working with a new head trainer for this fight: Rodel Mayol, the former WBC junior flyweight titleholder who had assisted in the corner for the Muwendo fight. Mayol is also from the Philippines, and his proficiency with Moralde’s native Bisayan language makes communicating instructions easier.

For this camp, Moralde trained two weeks in the Philippines before relocating to Wild Card Gym in Los Angeles with Mayol. One area of focus Mayol worked on is improving Moralde’s right hand, a must when fighting against a lefty. Moralde often pushes it out or slaps with it, which won’t get the job done against a quality southpaw.

“I trained him to throw a lot of straights because he has a hard time fighting a southpaw guy. But in sparring he looks good, he throws a lot of punches,” said Mayol.

“We won the last fight against a very good fighter but this is his biggest test.”

Moralde doesn’t think the problem is with boxers of any stance, as long as he has prepared adequately. Part of his training was getting plenty of sparring with southpaws, and improving his conditioning after fading towards the late rounds against Muwendo.

“Herring is good and strong, but there is nothing extraordinary about him. It’s not like he’s Lomachenko,” said Moralde, who was himself an experienced amateur with 300 fights and three national titles in the Philippines, at the media workout.

Fighting on the ESPN platform on a show promoted by a major company is in itself a big boost to Moralde’s self esteem, Manangquil says.

“Moralde is a thinking boxer and confidence is a big thing for him. Also, he is very motivated cause he is the big league with Top Rank giving him fights. If he wins he knows a bigger fight is coming up,” said Manangquil.

More than just establishing his legacy as a pro, Moralde also has a growing family to provide for. His wife is pregnant with their third child, providing greater urgency for a breakout win.

“It’s very important to me to make a name in the boxing industry and to give my family a good life,” said Moralde.

“We studied his weaknesses. I can beat him.”