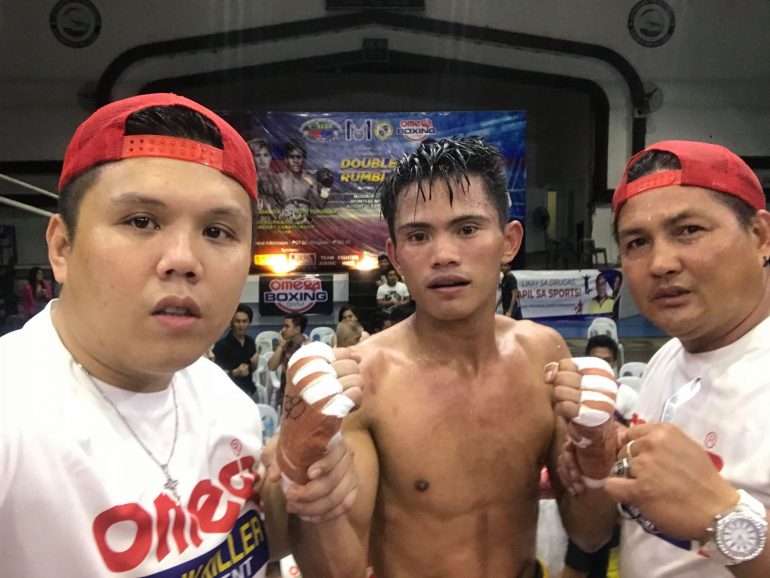 Ahead big on the scorecards, Christian Araneta decided to display his evasiveness in the twelfth round of his fight against Jerry Tomogdan. When he heard the ten-second clappers, Araneta launched one final volley of blows to punctuate the performance. The result was Tomogdan stretched out on the canvas with his arms extended outward, out cold from a left uppercut.

The official time was 2:58, with the count being waived off once referee Tony Pesons recognized the distress Tomogdan was in. The scores at the time had Araneta (16-0, 14 knockouts) ahead 108-101 on two cards and 107-102 on the third. The fight took place Saturday, August 18 at Mandaue City Sports and Cultural Complex in Mandaue City, Philippines with a minor WBC Asia junior flyweight title at stake.

Tomogdan (25-10-4, 13 KOs), a one-time world title challenger, was wobbled several times in the fight and was down for about five minutes before being taken to a local hospital afterwards, according to a source with the event’s organizer, Omega Boxing Promotions.

Scary knockout as Christian Araneta (16-0, 14KOs) knocks Jerry Tomogdan cold with two seconds remaining in round 12 to win the @WBCBoxing silver junior flyweight title tonight in Cebu, Philippines. Tomogdan was down for several minutes after. pic.twitter.com/T3znRHXhst

“Man, Jerry Tomogdan is difficult to fight,” Araneta’s trainer Julius Erving Junco tells The Ring. “He counters a lot, he has a good jab and also a strong straight. That’s why we did not take him easily.

“And in the twelfth round he started to brawl Araneta and there’s the uppercut.”

The win was Araneta’s second straight since sitting out a year after surgery which required a titanium implant to be placed in his right shoulder in June of 2017. The missed time caused Araneta to slip in the rankings, though he remains ranked no. 14 by the WBO and WBA at 108 pounds.

Araneta, a stablemate of Jhack Tepora and Jessie Cris Rosales, had fewer than ten amateur fights, which is evidenced by the southpaw’s rawness. But the 23-year-old has shown he can erase deficits with one punch, and has knockout wins over domestic prospects Jesse Espinas and Jason Neri.

“This kid has a gift. His left leg is shorter than his right, but he has tremendous power,” said Junco.

“For his size and weight he hits like a super bantamweight.”

Promoter Pio Paulo Castillo says he isn’t sure when Araneta would be back in action, but that he’s looking to move Araneta to the international level “in the next few fights.”

“We are aiming for world title next year,” said Junco.

In other results, globe-trotting Frenchman Jaber Zayani (15-0, 8 KOs) won a split decision over Eduardo Mancito (16-9-2, 9 KOs) in a ten-round junior lightweight fight. Scores were 95-94 and 96-93 for Zayani and 96-93 on the third for Mancito. Since turning pro in 2012, Zayani has fought in Canada, France, the United States, Mexico, Thailand, and now the Philippines.