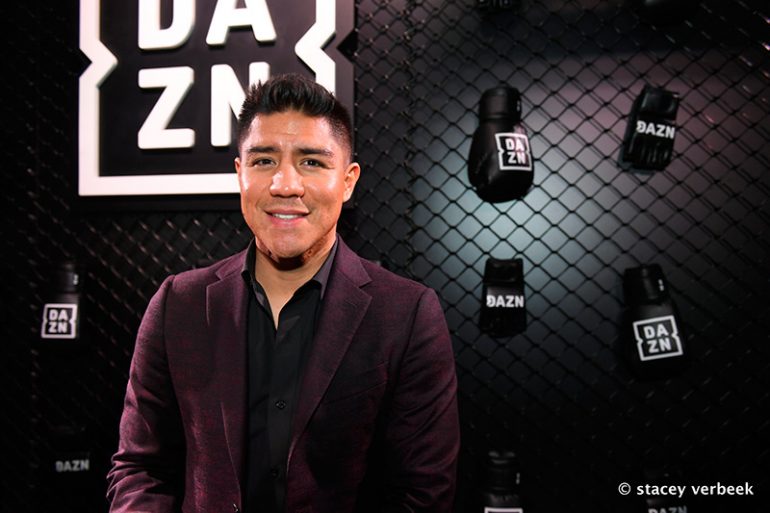 Eddie Hearn on Wednesday revealed the fights that will fill out his first U.S.-based show streamed on DAZN.

Vargas (28-2-1, 10 knockouts) battled Adrien Broner to a draw in an action-packed bout televised on Showtime in April. The 29-year-old Las Vegas resident will be leaned on as one of Hearn’s most high-profile American fighters.

“I promise you that I will bring fireworks and I will bring entertainment,” said Vargas, who lost his welterweight title to Manny Pacquiao in November 2016. “I am en-route to becoming a world champion once again.”

“Thomas Dulorme is a contender that always comes to give a showdown. He never lets you down, he always brings you action and when the name came up I said ‘sure, let’s do it!’ It doesn’t matter to me, whoever you want to put in front of me, I’m ready.”

Vargas is rated No. 7 by The Ring at 147 pounds, while Dulorme’s career has been a disappointment. He emerged from Puerto Rico with a bundle of hype surrounding him due to his big punch, but an upset knockout loss to Luis Carlos Abregu in 2012 derailed him.

The 28-year-old’s other two defeats came to Terence Crawford (via knockout) and in his last fight, an August bout with Yordenis Ugas that went the distance (they traded knockdowns).

A win over Vargas, though, and Dulorme (24-3, 16 KOs) can put his career back on track, though he’ll be a decided underdog.

And as Hearn promised, the show will contain a number of bouts featuring top-10 fighters, even if many of the matchups themselves are underwhelming.

Heavyweight contender Jarrell “Big Baby” Miller, who’s been jockeying for a meeting with Anthony Joshua, will fight former cruiserweight champion Tomasz Adamek on the undercard, though the 41-year-old is well-past his best days. However, he’s a proven ticket-seller in Chicago, where there’s a large Polish population.

“Adamek made me kind of hungry when he called me a boy,” said Miller, The Ring’s No. 8 heavyweight. “He is a legend but when you fight a young stud like me, sometimes parents get their butt whipped. This young man is going to take it to pops. The Heavyweight division in booming right now.

“Adamek stepped up in the blink of an eye to take this fight and I take my hat off to him but bring the ambulance because it’s gonna be an early night. I’m not going to spend an extra round in that ring. AJ might be the best in England but he isn’t the best in America and that’s the way I see it. Hard work, dedication, cheeseburgers, let’s get it.”

The other two bouts rounding out the card were previously announced. Artur Beterbiev will defend his light heavyweight title against Callum Johnson and Danny Roman will put his junior featherweight belt on the line vs. Gavin McDonnell.