Pacquiao-Matthysse to be streamed live on ESPN+ in U.S. 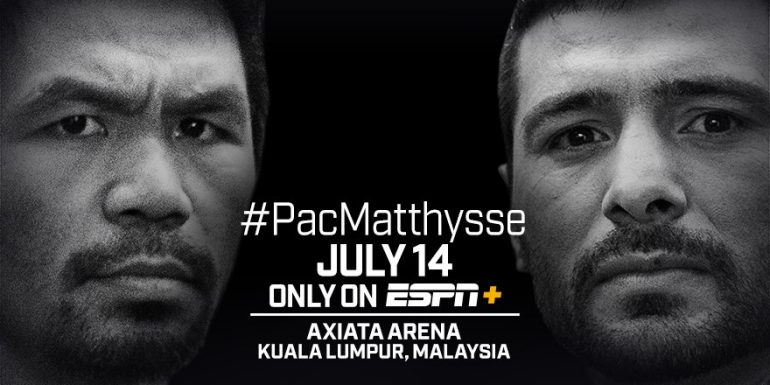 The Manny Pacquiao-Lucas Matthysse fight finally has a U.S. broadcast partner as direct-to-consumer subscription service ESPN+ announces it will stream the fight live from Malaysia.

The deal was announced Saturday, a week before the Filipino and Argentine sluggers step into the ring at Axiata Arena in Kuala Lumpur on July 14 (July 15 Malaysia time). For the 39-year-old Pacquiao (59-7-2, 38 knockouts) it’ll be his first time in the ring since last July, when he lost a controversial decision to Jeff Horn in Australia on regular ESPN.

The pickup is a welcomed bit of good news for Top Rank, which is handling the broadcast rights for the event, after the promotional company lost its main event to tonight’s card in Fresno, California when Danny O’Connor withdrew before the weigh-in for his challenge of WBC junior welterweight titleholder Jose Ramirez.

“I am very happy that all of my fans in America will have a chance to watch my next fight on ESPN+, and I am looking forward to putting on a show,” Pacquiao said in a Top Rank press release.

“Matthysse is a great opponent. I am training with all of my heart because I want to be champion again.”

“This extraordinary event only affirms ESPN’s commitment to providing boxing fans with the biggest and best fights in the sport,” said Top Rank CEO Bob Arum in the same release.

The release makes no mention of broadcast inclusion of the vacant IBF flyweight title fight between Moruti Mthalane and Muhammad Waseem, which is the only full world title fight on the card.

ESPN’s primary channel will show another card from Top Rank earlier on the same day, with Regis Prograis facing Juan Jose Velasco in the main event from New Orleans, with the broadcast beginning at 7 PM and the undercard streaming on ESPN+ at 4:30 p.m.

There’s no shortage of outlets to watch the fight in the Philippines, with free-to-air channels ABS-CBN, GMA and ESPN 5 showing it, plus other options on pay-per-view for live time broadcasts without commercials.