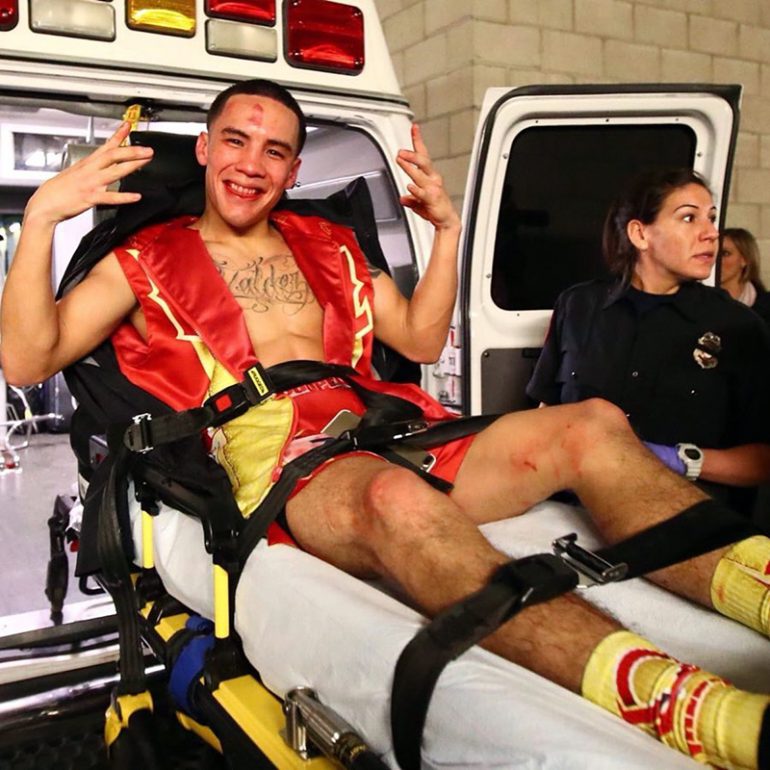 Oscar Valdez figures to be on the shelf for a while.

The Mexican actio fighter waged war with Scott Quigg on Saturday and scored a unanimous decision victory to retain his featherweight title. He emerged from the bout with a broken jaw, suffered in Round 5, and headed immediately to Harbor-UCLA Medical Center.

On Monday, Valdez had his jaw wired shut by oral surgeon Dr. Douglas Galen in Beverly Hills, California, in a procedure that lasted just over an hour, Frank Espinoza Jr., who manages the fighter along with his father, told THE RING. The 27-year-old’s jaw will stay that way for approximately five to six weeks, during which he’ll be limited to a liquid diet.

“No surgery needed, no plate, just a medical procedure they had to get done,” Espinoza said. ” … I don’t know how long he’s going to be out, that’s going to be the doctor’s call, we’re just going to follow the doctor’s orders. I don’t want him in the ring anytime soon.”

And with good reason.

Valdez (24-0, 19 knockouts) has successfully defend his 126-pound title in back-to-back-to-back grueling affairs. Last year, he engaged in brutal bouts with Miguel Marriaga and Genesis Servania, and now this, the most savage of them all.

Blood poured from Valdez’s mouth from Round 5 on, and his teeth were also damaged by the much heavier Quigg, who missed weight and came in almost seven pounds more than the titleholder on fight night.

“He put up one heck of a fight, he showed a lot grit, courage, I always knew he had the heart of a champion,” Espinoza said. “I always knew this kid is special, he has that X-factor, just a phenomenal fighter. He’s just taking it easy now, some well-deserved rest.”

Valdez will be forced to consume plenty of yogurt and protein shakes over the next five to six weeks while he recovers. He loves pizza and hamburgers when he’s not in training, according to Espinoza. He’ll still be able to consume the latter, as well as eggs, but it will have to be blended down.

The price of being an action fighter.