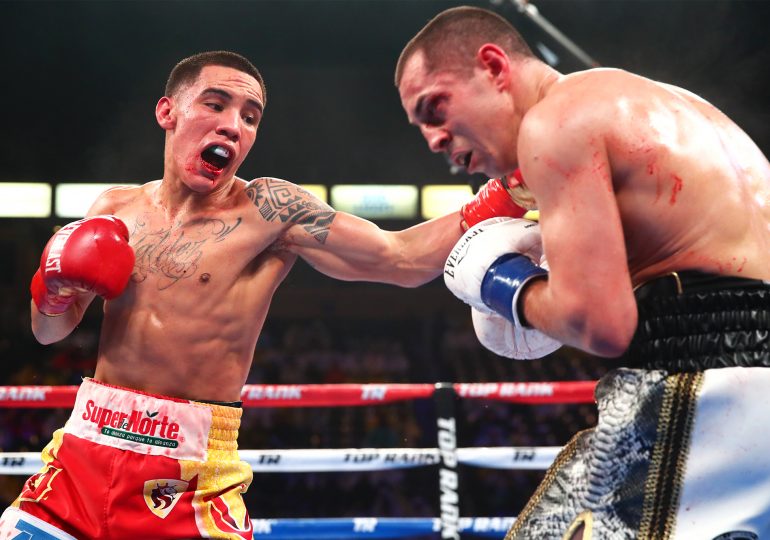 CARSON, Calif. — StubHub Center produced another slugfest, even if the atmosphere here this time around was a little surreal.

A couple of thousand dedicated fans sat in the rain, yellow ponchos shielding their clothes, as the two featherweights duked it out in a war. Well, they were both contracted to be featherweights anyway.

Oscar Valdez made weight, but Scott Quigg, the challenger, weighed 128.8 pounds on Friday, 2.8 over the limit. He was ineligible to win Valdez’s title, but the bout went on, and what a fight it was.

Valdez (24-0, 19 knockouts) retained his title anyway, even though he conceded almost seven pounds on fight night. The Mexican action fighter slugged his way to victory against the bigger man with a unanimous decision via scores of 117-111, 118-110 and 117-111.

Valdez also had to contend with a broken jaw suffered in Round 5 (as well as some damaged teeth). He was immediately transported to Harbor-UCLA Medical Center afterward.

“I thought it might have been a round or two closer,” said Quigg, who sustained a badly broken nose around the midway point of the bout, which left the ring mat stained with blood. He also suffered a stress fracture in his right foot about a month ago, according to promoter Eddie Hearn, which limited him in training.

“That’s what I expected on the cards, but he won the fight. The close rounds, they sided with him.”

Added Hearn: “He was in a terrible physical condition having to make that weight. He couldn’t do certain things. It wouldn’t keep him out of the fight; he had to adapt. There is no one more professional than Scott Quigg, it devastated him (to not make weight).”

The titleholder tried to establish his jab from the onset, but Quigg (34-2-2, 25 KOs) kept plugging forward with wild shots, predominantly an overhand right that missed its mark over and over.

As the rounds reeled on, that right hand began to connect, but Valdez absorbed the shots and they began to trade on the inside.

Quigg, a former titleholder at 122 pounds (but 142.2 pounds on fight night), was gashed over the left eye in Round 5, and he was forced to breathe through his mouth. But the 29-year-old Brit managed to stun the Mexican with a huge right hand later that round that left him reeling and grabbing for dear life.

As he always does, though, Valdez battled back. The 27-year-old has gained a reputation as one of boxing’s most dependable action fighters after consecutive action-packed affairs with Genesis Servania and Miguel Marriaga last year.

This fight only cemented that status.

“He was handicapped after giving up the weight, everything,” Top Rank president Todd duBoef said. “When you drain yourself to get that extra weight off and the opponent doesn’t do it … he went through a ton of adversity.

“You couldn’t ask for a performance as spectacular as that, especially coming back in the later rounds. He’s a younger fighter who is still maturing.”

They continued to exchange powerful blows on the inside as Quigg stalked, but Valdez was there to meet him in the middle of the ring, blood flying around the ring as raindrops splattered feet away. Valdez dug deep over the final three rounds and overpowered Quigg to leave no doubt who the victor was.

Now, Valdez needs rest, and plenty of it to recuperate after yet another brutal ring war.