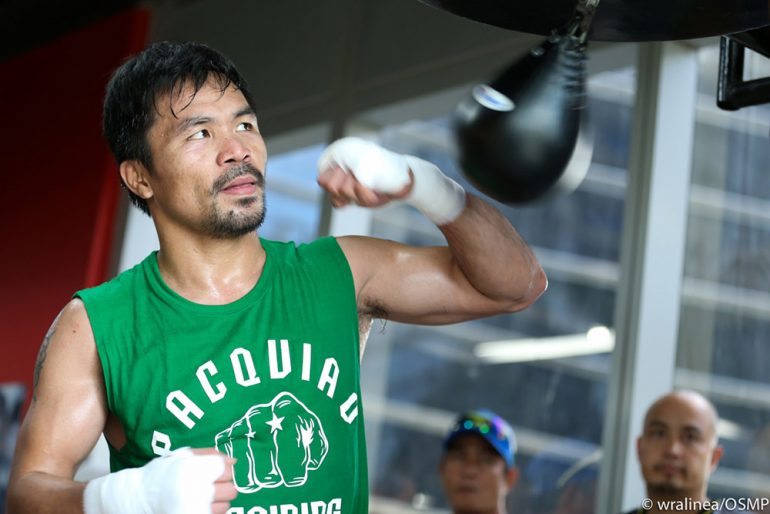 Manny Pacquiao hasn’t scored a knockout since 2009 when he took out Miguel Cotto in the 12th round, and at 39, he’s on the downslope.

But there’s still plenty of big fights looming out there for the all-time great, and his next opponent could return him to the knockout column.

Pacquiao is set to face faded action fighter Mike Alvarado on April 14 at Mandalay Bay in Las Vegas in Top Rank’s first pay-per-view foray on ESPN. Terence Crawford will fight in the main event against Jeff Horn in his welterweight debut, a possible precursor to a long-discussed meeting with Pacquiao in the fall.

This will be the Filipino senator’s first fight since a controversial decision loss in a welterweight title fight to Horn in July.

“Would I like to see him get (a knockout)? Yes, of course. Because then that would build up his next fight in the fall,” Top Rank CEO Bob Arum told RingTV.com. “But again, you know, he’s a smaller guy fighting these welterweights and he’s certainly not as fast as he used to be and so his knockout ability, I think, has been diminished over time.”

So if all goes according to plan, Pacquiao could challenge Crawford for his old welterweight title in the fall in a classic passing-of-the-torch fight. Pacquiao is now 39 and past his best days, while Crawford is THE RING’s No. 2 pound-for-pound fighter.

But it could also be Lomachenko, one slot behind Crawford on that list, who grabs the opportunity of a lifetime. Even at this juncture, Pacquiao still holds name value and just sharing the ring with him should increase the visibility of the athlete.

Whomever grabs the chance, Arum believes that it will “absolutely” be either Crawford or Lomachenko who fights Pacquiao in the fall.

“That’s going to be up to Mr. Pacquiao,” Arum said. “I’m going to be like Switzerland having both of these guys. Both can make good money fighting Pacquiao and I’m going to let Manny, assuming everything works out in April, make the decision.”