Andre Dirrell: I’ll ‘leave no doubt who better fighter’ is in March 3 rematch with Jose Uzcategui 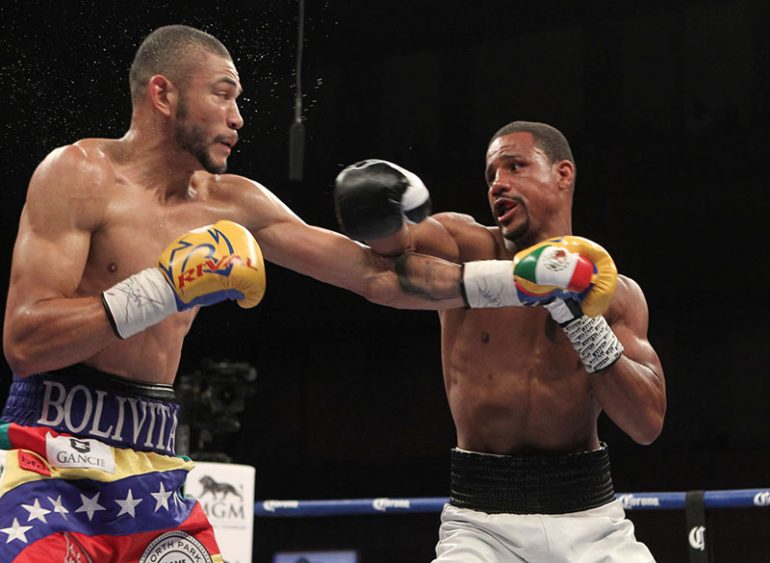 The first meeting ended Andre Dirrell on the mat and Jose Uzcategui on his feet as punches rained down on the Venezuelan.

It was Dirrell’s trainer and uncle, Leon Lawson Jr. throwing the blows after Uzcategui was disqualified for repeatedly hitting after the bell.

Uzcategui and his team argued that he was in the middle of a combination, although the final punch, which knocked Dirrell (26-2, 16 knockouts) to the canvas, connected after the round expired. Now, they’ll both have a chance to erase any doubt.

The fight has been in the works for months and RingTV.com reported last month it would land on March 3 underneath Deontay Wilder’s title defense against Luis Ortiz in Brooklyn. It was finally made official Monday, and the super middleweight bout will open up the Showtime telecast (Jermall Charlo-Hugo Centeno is the co-feature.)

“I’m extremely excited to be a part of one of the most dynamic tripleheaders this year,” said Dirrell, THE RING’s No. 7 super middleweight. “This time around I’ll be phenomenal and leave no doubt who the better fighter is. I’m 100 percent focused on dominating Uzcategui on March 3 and getting another shot at the title.”

The 168-pound division is hot right now, with George Groves set to defend his title against Chris Eubank Jr. on Saturday in the World Boxing Super Series semifinal. And with a victory, Dirrell will be set up nicely to eventually meet the winner of the tourney.

But pushing past Uzcategui (26-2, 22 KOs) will be no easy task. The relentless puncher gave the more athletic Dirrell fits in May and was ahead on two scorecards when the bout was stopped in Round 8.

“I’m very excited to go get what’s mine,” said Uzcategui, 27. “I feel I won the last fight. I didn’t feel I did anything wrong. What happened in the last fight is in the past. I’m going to get what belongs to me. The world will see what ‘Bolivita’ can do and they’ll want to see more of me.”

Dirrell, an Olympic bronze medalist, is the more accomplished — and talented — fighter, but he’s 0-2 in world title opportunities. One of those setbacks, a decision defeat to Carl Froch, was hotly disputed. The other, a points loss to James DeGale, left no doubt.

Now, at 34, Dirrell is staring down the barrel in the last chance saloon. He needs to score a victory over Uzcategui again, and this time, without any controversy.