Andre Dirrell, Jose Uzcategui to fight in rematch under Wilder-Ortiz on March 3 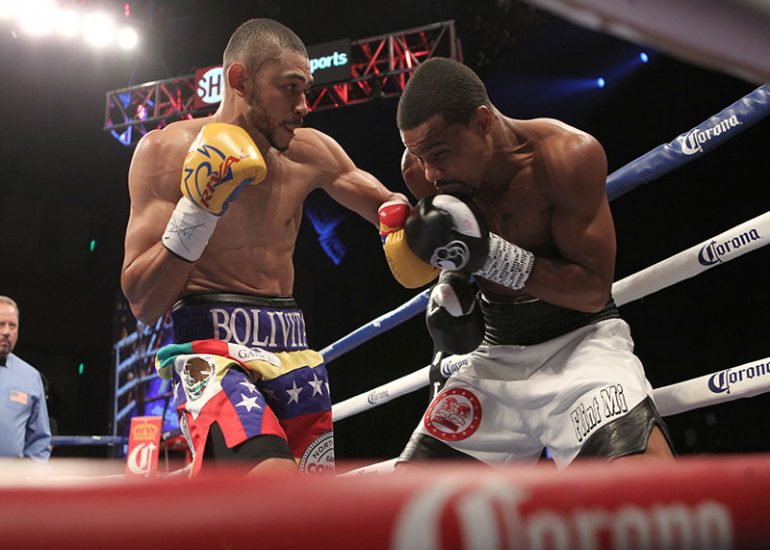 The first fight ended amid tremendous controversy and a melee in the ring, so they’re running it back one more time.

Andre Dirrell and Jose Uzcategui will battle again in a rematch, and once again, the winner will be granted an IBF super middleweight title shot. The second meeting will take place March 3 in the Showtime co-feature to Deontay Wilder-Luis Ortiz in Brooklyn, New York, sources told RingTV.com.

The IBF ordered the rematch in June, with the winner in line for a shot at the title held by Caleb Truax, who scored a massive upset victory over James DeGale in December.

The first fight, in May, ended with Dirrell on the mat and his uncle/trainer, Leon Lawson Jr., raining down blows on an unsuspecting Uzcategui in the corner. Lawson later was arrested and charged with misdemeanor assault. He also was suspended indefinitely, so Dirrell will have to find a new cornerman.

Uzcategui (26-2, 22 knockouts) was in the midst of a combination, but the final punches landed after the bell to signal the end of Round 8, and referee Bill Clancy disqualified the Venezuelan.

Dirrell, THE RING’s No. 6 super middleweight, won a bronze medal at the 2004 Olympic Games, and as a pro, he established as one of the most athletic fighters in the sport.

But he’s been unsuccessful in his only two title shots. First, he dropped a controversial split decision to Carl Froch in England during the World Boxing Super Series in 2009. It would be six more years before he earned another crack at a title, but he was dropped twice and outpointed by DeGale.

At 34, this could be the last opportunity for Dirrell to earn another shot at a belt.

“He’s a hungry fighter, he’s strong, and he wanted to win, just like me,” Dirrell told RingTV after the fight. “It’s really 50-50 (if it was an intentional foul). That was the third time. I’m just going to say he probably thought he could have got away with it.

“He hit me twice before after the bell and because the referee didn’t warn him he could have taken advantage of the state just to weaken me for next round – that’s a good strategy. If the ref didn’t warn me, I would probably do the same thing.”

The Flint, Michigan, native was out of action for almost two years after another disqualification victory, one over Arthur Abraham in that same 168-pound tournament. Dirrell (26-2, 16 KOs) was punched after slipping on the canvas and experienced neurological issues afterward.

On the heels of his latest DQ win, Dirrell will look to re-establish himself in the super middleweight division against a dangerous puncher.