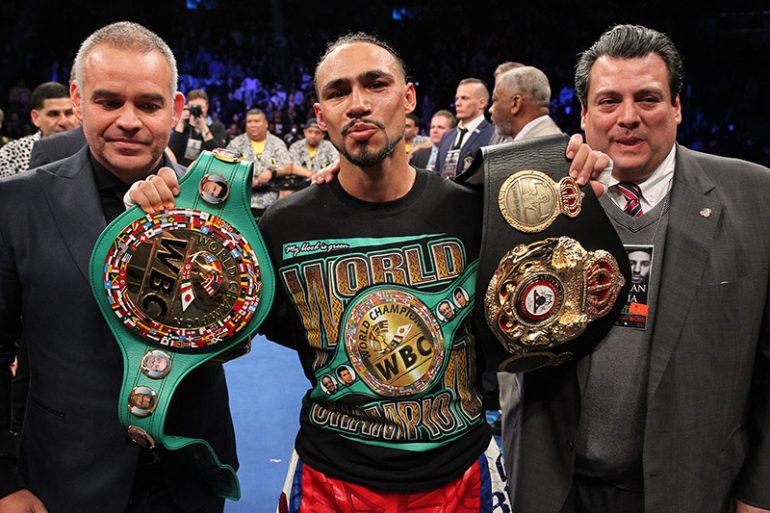 It’s been 11 months since we last saw WBA and WBC welterweight titleholder Keith Thurman in action.

On March 4, 2017, Thurman edged Danny Garcia at the Barclays Center in Brooklyn by 12-round split decision to unify the division. But although Thurman (28-0, 22 knockouts) got the victory that night, the ensuing months have been frustrating for “One Time”, who is rated No. 1 by THE RING at 147 pounds.

Heading into the Garcia fight, Thurman began to feel that all was not well with his right elbow. In fact, the problem became so intense that it led to him tapering down sparring and any extensive training that involved utilizing the joint. 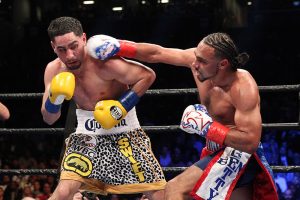 “The elbow was all messed up,” revealed Thurman. “I posted a picture on Instagram. The swelling was really intense. I knew it was gonna take time to come down. Elbows are funny little joints and they need a lot of work to come back around. We didn’t rush it, we’ve been patient.”

During Thurman’s time out, there’s been a lot of change at 147 pounds: Porter has worked himself into the WBC mandatory position, Errol Spence Jr. claimed the IBF title, Jeff Horn controversially upset Manny Pacquiao to win the WBO belt and Terence Crawford’s arrival on the welterweight scene is imminent.

Exciting times, but Thurman was told by doctors to rest up and not even think about boxing for a minimum of six months. Even now, the unbeaten boxer-puncher is still ticking over and doesn’t know who will be in the opposite corner for his May 19 comeback.

“I’m still being patient, but we need to ease into using (the elbow) at a heavy level and get prepared for the May date,” Thurman explained. “Normally we wouldn’t even announce a fight that’s over 100 days out, but this was part of a big announcement with Showtime.”

As a result, every prominent welterweight in the division has been calling out Thurman, which is only to be expected.

“I’m at the top,” laughed the unified titleholder. “Floyd (Mayweather’s) no more. Manny Pacquiao’s no more. I’ve been on the throttle for a long time. I was WBA champion for a while, then I unified titles. That was a big accomplishment for me and my career; it was a dream come true.

“Spence brought the title back home. We have two American champions and one Australian champion in the welterweight division. But Horn is fighting a champion such as Crawford. Even though Crawford is moving up, he is definitely favorite in that fight.”

The one name Thurman keeps hearing is Spence. His compatriot impressed many by travelling overseas and ripping the IBF crown from Kell Brook last May.

“I’m not worried about Spence,” said Thurman. “He’s a great boxer. He’s 100 percent fundamentally sound. He comes in shape. He puts on a great performance. He broke down many fighters and he broke down a champion in Kell Brook.

“I see what people are excited about and that’s good, but he just had his first title defense (seventh-round stoppage of Lamont Peterson in January). There’s other great fights at 147, and to be honest I want all four titles.”

However, while Thurman made it clear that a Spence fight isn’t on his immediate radar, he insists the “Superbowl” fight will happen in the future. 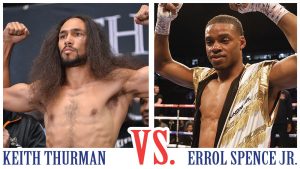 “You can let your blood boil or you can sit back and enjoy these fights in between and wait for this big fight,” said Thurman. “It will come through, but it’s not gonna happen in 2018. If he’s ‘The Truth’, he’s not gonna go nowhere. We already know I’m No. 1 for a reason. I’ve been tested. I’ve been through trials.

“I don’t have a problem fighting the best. I’ve already proven that many times. Some people think I’m scared. I’m not scared. I’m just playing my cards right. If you want to be a winner, you’ve got to play your cards right. When was the last time [there were three unified belts] in the welterweight division? Floyd Mayweather didn’t do it in his whole career.

“It is a historical event, so it’s going to need the recognition it deserves. It should happen in a timely fashion, obviously, but it can’t happen right after a surgery. I look forward to any challenge. I definitely look forward to great challenges, but what I look forward to the most is being the winner and making history.”

Let the countdown begin. Hopefully the stars align and Thurman-Spence becomes a reality in 2019.