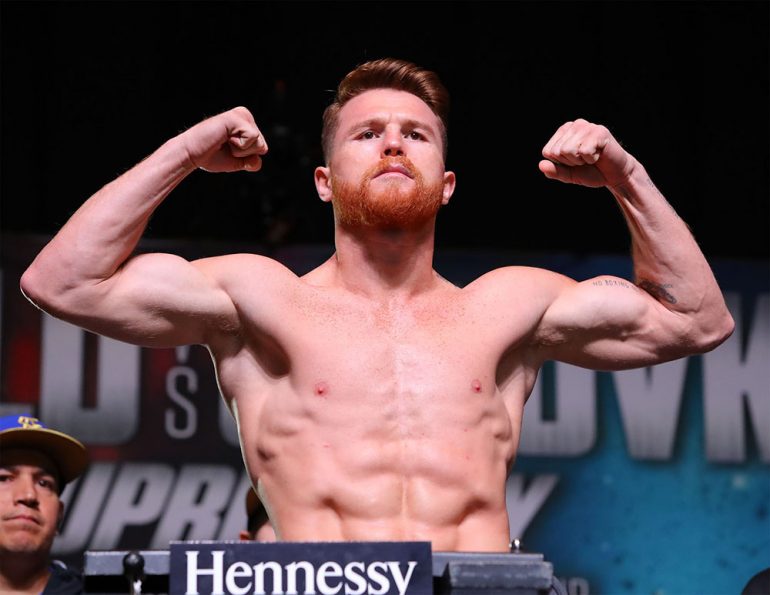 LAS VEGAS — Canelo Alvarez has sported a bushy red beard in the lead-up to his fight against Gennady Golovkin.

Gone is his trademark baby face, replaced by a sheath of crimson along his neck, lips and chin.

There’s just one problem with the new look: it could be damaging to GGG come fight time.

No, Abel Sanchez isn’t worried the facial hair will cushion any of Golovkin’s heavy blows. Rather, GGG’s longtime trainer is concerned the beard could rough up Gennady’s face in close quarters; that the hair could prick his eyes and just overall be bothersome to Golovkin.

So Sanchez implored Bob Bennett, Executive Director of the Nevada State Athletic Commission, to inspect the length and make sure it doesn’t exceed the quarter-inch allowed under the rules. Bennett couldn’t immediately be reached for comment.

“It’s a little bit longer than it should be,” Sanchez told RingTV.com on Friday following the weigh-in. “It’s very rough on an opponent. I left it up to the commission. I voiced my displeasure.”
‘”
Sanchez believes the beard is approximately a half-inch long and said individual hairs of Canelo’s are “all over the place.” Simply put, the architect of the famed Summit Gym in Big Bear, California wants the hair “shaved to a point where it’s neatly trimmed and presentable.”

But right now, there are no plans for the Mexican star to address the beard at all.

Golden Boy Promotions President Eric Gomez showed RingTV.com a picture of Conor McGregor’s beard during his August 26 fight against Floyd Mayweather. “Money” lobbied to have the beard trimmed to no avail, and it was apparent that the Irishman’s facial hair was much longer than Canelo’s was on Friday.

“It’s just a tactic,” Gomez said, referring to Sanchez’s pleas to the commission.

So Sanchez is content for now, pleased that the matter is in the hands of the commission. The next time he’ll see Canelo’s face is hours before the bell rings, when he’s in Alvarez’s locker room to inspect the wrapping of million-dollar hands.

“I’ve never had somebody with a beard in a fight, at least not to that length,” Sanchez insisted. “One- or two-day stubble, everybody does that. They’re concentrating on boxing and maybe don’t shave for a couple days, but (Canelo’s beard), that’s not a couple days.

“It could rough his face up, they’ll be fighting on the inside. There’s no reason for it to be there.”

And if Gomez proves correct and the beard remains intact? Then, Sanchez says, he’ll know exactly “what I’m dealing with” when it comes to the Bennett and the commission.

With Alvarez the A-side and already the recipient of some questionable scores from Dave Moretti, a Nevada judge who will be working Saturday, will Sanchez then give his charge the order to go for the knockout? Possible. Plausible, even. Or just maybe, this is all gamesmanship by Sanchez to gain an edge in a fight that figures to be razor-thin, where every advantage is paramount.