Berto thinks Porter might be the more spent fighter despite youth 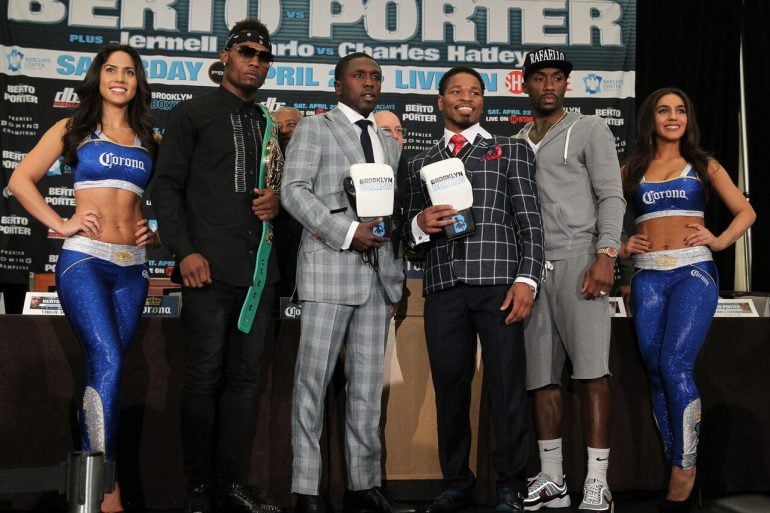 One of the running themes in the WBC welterweight title eliminator between Shawn Porter and Andre Berto on Saturday is the idea that Berto is the old veteran facing a young lion in Porter.

But Berto, 33, flipped that notion on its ear when he suggested that perhaps Porter, with his pedal-to-the-medal, aggressive approach to his fights and training regimen, has more wear-and-tear on him than his 29 years may indicate. “I know he’s the type of kid that trains almost year-round,” Berto told reporters following the final press conference on Thursday for a bout that will take place at Barclays Center on Showtime. “He has a lot of miles on his body, especially being a young kid. He doesn’t stop. Even between fights, he’s banging away at his body. He’s sparring every other day. He’s doing a lot, so as we get older we just have to get smarter. It’s a young man’s sport but you have to play smart after a while.”

Porter admitted he’s aware of the perils of overtraining, given his appetite for training and style in the ring and he’s worked with his father and trainer, Kenny to make sure he’s fresh on fight night. Porter also said he may ease up a bit on Saturday and box more against Berto that some may expect. Porter referenced the big shots he took in his fight with Keith Thurman in a close loss last June as lessons learned. “Do I want to get hit like that again?” he said. “No I don’t. So, I’m prepared to win this fight, go after him and make sure I don’t get hit like that again. I’m not sure if that changes my approach totally.”

He acknowledged that improving his defense and fighting at a more measured, smarter rate has been a priority since the bout with Thurman.“I do push the pace and the tempo so much that there are times when I hit a guy and I keep going,” he said. “I’m learning that you don’t always have to go-go-go. After you hit a guy, create that distance, let the judges know I got him and he can’t hit me back.”

Porter said that boxing Berto is the key to victory. But Porter also smiled and laughed when he was asked if he’s trying to provide a false impression of his fight plan only to resort to his aggressive tactics. “I could very-well be using a Jedi mind trick,” he said to laughter.