Martin Murray will not back down from Gabriel Rosado 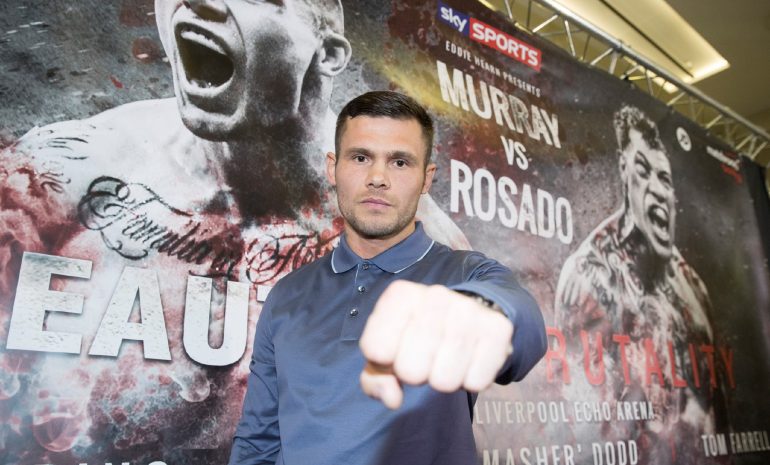 Despite being a disciplined and dedicated professional, there has always been something kamikaze about Martin Murray’s thirst for combat.

In world title fights, Murray has fallen short against Felix Sturm and Arthur Abraham in Germany, Sergio Martinez in Argentina and Gennady Golovkin in Monte Carlo. Winning any of those fights in your own backyard would be a tall order but the battle-hardened Murray thrives on challenges.

This Saturday, the 34-year-old technician takes on former world title challenger Gabriel Rosado at the Echo Arena in Liverpool, England. Murray is favored to win but the real test here could be making the middleweight limit of 160 pounds. For the past two years, the teak-tough Englishman has been campaigning at super middleweight.

“Everything is good,” countered Murray, who sounded positively chirpy with only five days until fight night. “I’m making the weight better than I’ve ever made it and I feel the best I’ve ever felt during fight week. Making super middleweight made me realize that I could have been making middleweight a lot easier.

“I’m being looked after, nutrition-wise. I have a chef that’s taking care of all my dietary requirements and I’m feeling great. As I’ve got older, my appetite has gone down a bit, so I’m not eating as much now. I understand my body and I know the things I need to do to make weight. I’m just buzzing and I can’t wait for Saturday.”

Murray (34-4-1, 16 knockouts) was happy to see the back of 2016. A second-round stoppage of the unheralded Cedric Spera was followed by a disappointing 12-round decision loss to countryman George Groves. There were many who thought his career was over, at that point, but Murray returned to outpoint the previously unbeaten Nuhu Lawal in a messy affair last November.

The Rosado clash offers Murray the chance to look good before a home audience and the opponent certainly has him fired up.

“(Rosado) has piped up a couple of times on social media,” said Murray, his voice beginning to rise. “He took something I said in an interview out of context and started acting – not gangster – but started talking things up a bit. He’s irritated me that way. Earlier on, he was walking around at the public workout with his top off and he’s just a posing bastard.

“The fight is all or nothing for both of us. I used to read up on crossroads fights when I turned pro and I wondered what it would be like to be in one of those. Suddenly, I’m the veteran and that’s the position I find myself in. A lot of people are excited about the fight because I won’t back down from him. No way. I just believe that I’m better in every single department.”

It may come as a surprise, or it may not, but Rosado (23-10, 13 KOs) has lost five of his previous eight fights. It’s worth mentioning, however, that four of those losses were to reigning or former world titleholders. Murray, as you would expect, is extremely confident of victory but one sensed he still retains plenty of respect for his opponent.

“He’s got a massive will to win and he’s a very proud guy,” he said. “You can never write him off and he’s always there. I just expect him to do his thing. He’ll fiddle about, look for a cheeky potshot, come forward and have a go. He may have had some losses recently but he’s mixed with the best.

“I just believe I can win this fight in many different ways. I can make it as easy or as difficult as I want on myself. It will all depend on how I feel on Saturday. Right now, I’m feeling good and, if Rosado wants a war, we’ll have a war. I’m the classier operator and I’ve trained for 12 hard rounds.”

Currently, Golovkin holds the IBF, WBA and WBC titles. Billy Joe Saunders, the WBO titlist, is promoted by Frank Warren and, with Murray aligned with Matchroom Boxing, that fight is as unlikely to happen as world peace. The St. Helens man, however, remains undeterred.

Murray said, “There’s Canelo Alvarez (THE RING Magazine middleweight champion) and then there’s Chris Eubank Jr., which would be very big domestically. I just know that a good win (against Rosado) puts me closer to a big fight. I need to go in here, win in style and see what the future brings.”

The fight will be broadcast live and exclusive on Sky Sports 1 in the U.K. The show begins at 7.30 p.m. local time.

Tom Gray is a U.K. Correspondent/ Editor for RingTV.com and a member of THE RING Magazine ratings panel. Follow him on Twitter @Tom_Gray_Boxing.