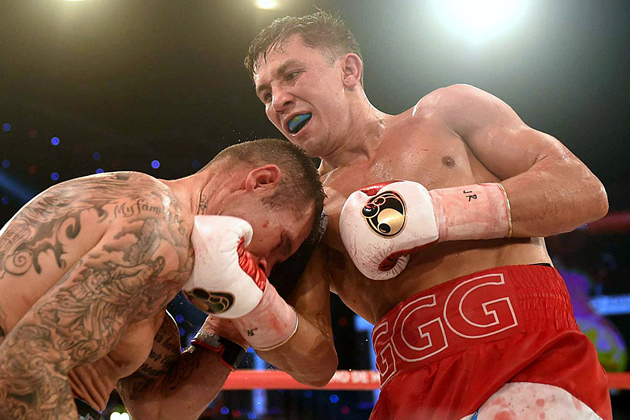 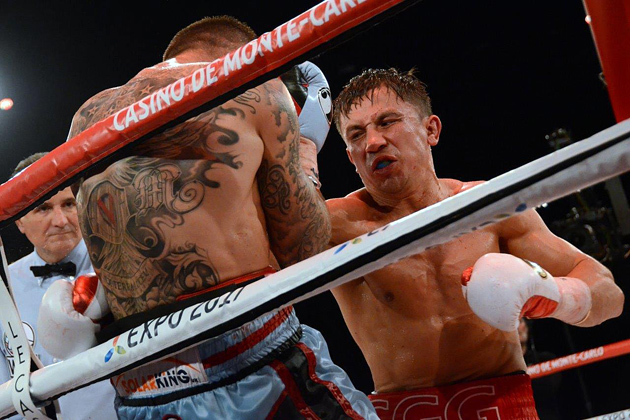 Gennady Golovkin has earned an unprecedented fast rise in worldwide popularity in the last 2¾ years, but there was very little buzz going into his WBA middleweight title defense against Martin Murray on Saturday.

Part of the reason is the fight took place in Monte Carlo, where the undefeated boxer-puncher dispatched overmatched tough guys Nobuhiro Ishida and Osumanu Adama in 2013 and 2014. But this time Golovkin faced a bona-fide top-10 contender in Murray, whose only non-wins were against then-WBA beltholder Felix Sturm (a draw) and then-RING champ Sergio Martinez (close decision loss) in those fighters’ home countries.

The rugged-but-skilled Brit was a quality enough opponent for HBO to air the bout live in the U.S., but there was no talk of Golovkin going into the fight as the “GGG Hype Train” was momentarily derailed (along with all other boxing news) thanks to the anticipation of “the announcement” – the official confirmation of the Floyd Mayweather Jr.-Manny Pacquiao super fight, which came on Friday. 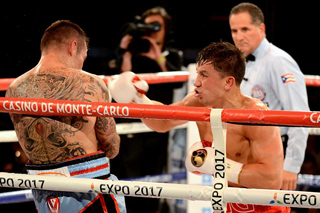 However, Golovkin (32-0, 29 knockouts), THE RING’s No. 1-rated middleweight, rekindled his buzz with another stellar performance against the courageous Murray, who was dropped three times en route to an 11th-round stoppage.

The 32-year-old Kazakh exhibited all of the tools and traits that make many boxing insiders and an ever-growing legion of fans believe that he’s a future star: patience, smart aggression, effective ring-cutting ability, economical combination punching, brutally accurate body attack, and of course, bone-crunching power. Golovkin is more than just a puncher. He knows how to punch, he has every punch, and he knows when to use the right punch at the right time.

Golovkin, who scored his 19th-consecutive knockout, was taken past the 10th round for the first time in his nine-year pro career by Murray (29-2-1, 12 KOs) but THE RING’s No. 6-rated middleweight paid a heavy price for that feat.

After boxing well in the first two rounds – sticking and moving and holding whenever the titleholder got too close – Murray began to feel the heat from Golovkin’s pressure, power jab, and varied punch selection. The St. Helens, Merseyside native was rocked in Round 3, dropped twice from body shots in Round 4, battered and bloodied against the ropes during the middle rounds, and dropped a third time by a right to the head in Round 10. 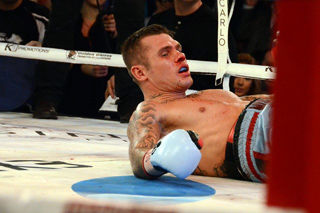 Through all the pain and punishment, Murray never stopped trying to get his offense going against the increasingly active but elusive Golovkin. The Englishman showed a lot of grit, but referee Luis Pabon did the right thing by stopping the bout 50 seconds into to Round 11.

Golovkin landed 292 of his 816 total punches, and 40 percent of his power shots, according to CompuBox stats. Murray landed 131 of 469 total punches.

It’s hard for any middleweight to concentrate on his offense when he knows any shot from Golovkin can seriously hurt him or end the fight, which is why many fans are clamoring for the most formidable 160 pounder in the game to step up to the super middleweight division.

That step up from 160 to 168 pounds (one of the biggest weight jumps in boxing) is imminent but Golovkin has made it clear that he wants to be the undisputed middleweight champ, which means he wants to collect the other major titles.

“I hope (my next fight) is Miguel Cotto,” Golovkin told HBO’s Max Kellerman during their post-fight interview. “My goal is all the belts. I need unification fight.”

Cotto, who holds the WBC title, as well as THE RING belt, presents the lineal middleweight championship and would make for Golovkin’s first pay-per-view level event. However, the Puerto Rican star is winding down his hall of fame-worthy career and has the option of facing bigger stars – such as Mayweather and Canelo Alvarez – in bigger events (and less dangerous fights).

In other words, the only way Golovkin, the WBC’s mandatory challenger, is going to get his hands on the green belt is if it’s been vacated by Cotto, who plans to return to the ring in June.

Golovkin’s next fight, tentatively scheduled for May 16 (in Southern California or San Antonio), might be overshadowed by the aftermath of Mayweather-Pacquiao. It will be up to his management to find a respectable-enough opponent to keep the attention of hardcore fans, and up to Golovkin to once again remind the public that he’s special with another kick-ass performance.

“(Setting up fights) is job for my promoter, Tom Loeffler,” Golovkin told Kellerman. “My job is in the ring.”

Loeffler, the managing director of K2 Promotions, which represents Golovkin, will be keeping an eye on the WBO title bout between beltholder Andy Lee and undefeated former titleholder Peter Quillin on April 11. Either contender would make for viable opponent (Lee in Europe, Quillin in the New York area, where Golovkin has fought many times) thanks to their punching power.

Loeffler will also be watching the results of the recently agreed-to bout between popular Montreal puncher David Lemieux and former beltholder Hassan N’Dam for the vacant IBF title, which hasn’t been scheduled yet.

And he’ll continue to put pressure on the WBC either force Cotto to defend against Golovkin or abdicate the belt. If it’s vacated, Golovkin, who just beat the sanctioning organization’s No. 1 contender in Murray, would be matched with the highest-rated available contender. Lemieux, the WBC’s No. 2 contender, is set to fight for the IBF belt. The WBC’s No. 4 contender, Billy Joe Saunders, is next in line to face the Lee-Quillin winner.

That leaves unknown and unheralded Jorge Sebastian Heiland, the No. 3 contender from Argentina, and Tureano Johnson, the No. 5 contender. There would be zero demand for Heiland, but Johnson, a hardnosed pressure-fighter from the Bahamas, would pique the interest of hardcore fans thanks to his fearless slugger style.

Golovkin plans to fight four times this year (as he did in 2013), so it’s possible that at least one unification bout can take place before the end of 2015. Another could conceivably take place in the first quarter of 2016 but the patience of boxing fans could wear thin by then.

Chavez tweeted the following challenge to Golovkin after the Murray fight:

“Without his power he’s not that good of a boxer, I’ll bet you GGG a million dollar of the purse that I’ll knock you out if we fight.

The tweets garnered chuckles from hardcore fans and media, who pointed out that Chavez pulled out of a scheduled super middleweight fight with Golovkin last summer.

Ward was more subtle with his dig, tweeting that he was “about to enjoy this good nap” prior to HBO’s broadcast of Golovkin-Murray.

Whether he took a nap or not, Ward will eventually watch the fight and continue to dissect Golovkin’s style in mental preparation for a future ring battle. And despite his occasional lack of discipline in training (and goofy tweets), Chavez is a proud – and very tough – fighter. If he says he wants to fight Golovkin, he probably means it.

If Golovkin can lock down fights with Chavez or Ward, nothing will overshadow the buzz going into either “big drama” showdown.