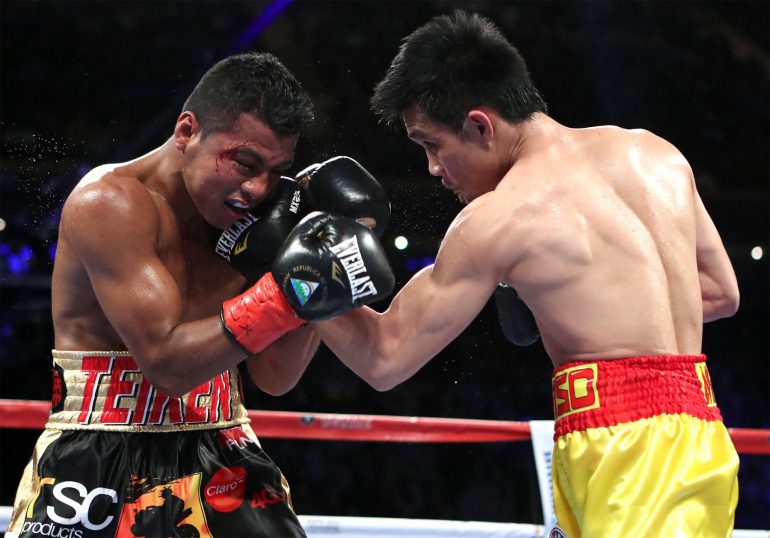 On Saturday, those vulnerabilities — a penchant for a leaky defense — were exploited by a rugged former titleholder in Srisaket Sor Rungvisai, who dropped Gonzalez in the first round and captured an unpopular majority decision by scores of 114-112, 114-112, 113-113 that was met by loud boos at Madison Square Garden in the HBO PPV co-feature to Gennady Golovkin-Danny Jacobs. “I’m a little dinged up but I thought I won the fight,” said Gonzalez, who likely lost his status as the top boxer in the sport. “I want an immediate rematch and to win my belt back.”

The upset win by Thailand’s Sor Rungvisai for Gonzalez’s 115-pound WBC title spoiled a potential rematch between Gonzalez and Cuadras after Gonzalez, who won a narrow and spirited unanimous decision in September, showed signs he may be slipping from his lofty perch. While Gonzalez fought well on Saturday and seemed to take over after some shaky early rounds, he also took his share of hard shots and his face was covered in blood for most of the match after a series of head-butts.

“I want to thank the fans in Thailand for sending me encouragement and I was able to do it because of all of their encouragement,” the Thai boxer said. “At this point, after winning this fight, I believe I can take on anyone, including a rematch with him. I have to admit he is a very good fighter and he would not give up.”

Gonzalez, who fought for the first time after his longtime trainer Arnulfo Obando died in November after a brain aneurysm, went down in the first round from a right to the body. Gonzalez got up but was hurt, back-pedaling for the remainder of the round. The two embraced when the round was over as Gonzalez trudged back to his corner, dejected. Gonzalez seemed to wake up in the second, landing a pair of flush right hands from the oncoming force that was the southpaw Sor Rungvisai, who kept moving forward, hurling punches.

A clash of heads with barely two minutes left in the third round left a bad gash over Gonzalez’s right eye. Sor Rungvisai was rising from a crouched position and banged into Gonzalez on the way up. The two hugged again after the third after exchanging violent punches in close quarters. Chocolatito seemed to have fully loosened up in the fourth, unleashing punches while ducking the onslaught of Sor Rungvisai. As the round ended, Gonzalez, blood streaming down his face, complained to referee Steve Willis of further head clashes. Gonzalez had his finest round in the fifth, firmly taking control of the bout with a dominant frame. He continually pinned Sor Rungvisai against the ropes while slamming shots off his head, particularly finding a home for the right hand.

The two slammed heads again to start the sixth, causing referee Willis to warn Sor Rungvisai for his aggressive tactics. More than a minute later, Willis deducted a point from Sor Rungvisai for a head-butt just as Gonzalez had hurt him with a left to the body and was pummeling him. Despite the foul, the two touched gloves to end the round, Gonzalez’s face covered in blood from the roughhousing.

The cut reopened again over Gonzalez’s right eye after another inadvertent clash of heads in the seventh. Doctors examined Gonzalez’s eye before the start of the ninth after the cut opened again the previous round. A phalanx of doctors eyed Sor Rungvisai after the ninth and tenth rounds, even though he appeared fine and was holding his own.

Gonzalez hurt him with a left midway through the 12th, causing Sor Rungvisai to momentarily stumble around the ring, and Willis to keep a close watch. The two exchanged punches as the final bell sounded and hugged and paraded around the ring with their arms around each other. It was a respectful and fitting end to a compelling battle that further provided evidence that Gonzalez is firmly not the untouchable fighter he once was — even if many thought he won on Saturday.