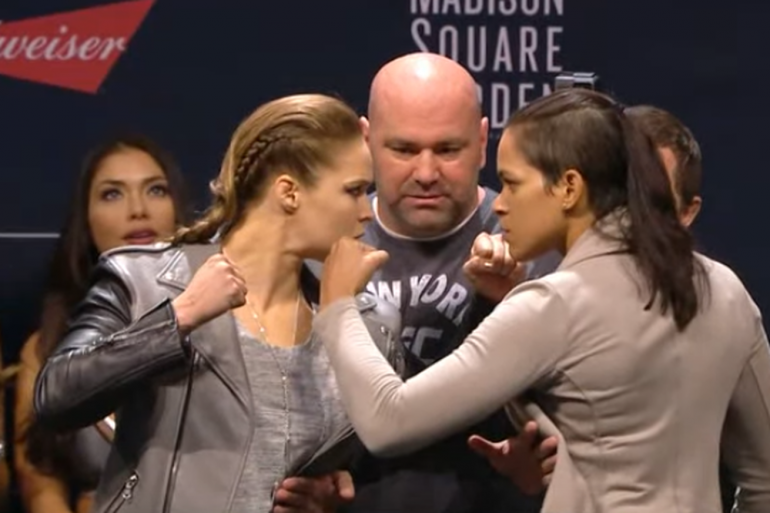 After a year long hiatus from any official UFC function, Ronda Rousey made a surprise appearance at the UFC 205 weigh-ins in New York City to have her first face-off with future opponent Amanda Nunes.

Rousey’s appearance was a complete shock to all in attendance at Madison Square Garden for the Alvarez vs. McGregor weigh-ins ahead of UFC 205 which takes place tomorrow at Madison Square Garden. UFC commentator Joe Rogan casually announced for media and fight fans to look at the big screen when unexpectedly a promo for Rousey and Nunes’ big fight at UFC 207 appeared for all to see.

After the promo, which touted Rousey as a legend returning to the Octagon, ended, Rogan announced “… now introducing the challenger, the former UFC woman’s bantamweight champion of the world ‘Rowdy’ Ronda Rousey.”

Despite the crowd being predominantly Irish fans who came to support Conor McGregor, there was a loud cheer for the former champion when she popped through the curtains. Rousey walked straight to the stage with a business power walk.

Nunes was introduced and came to the stage from the opposite direction. After a very intense minute-long face off with Nunes, Rousey posed for about 30 seconds and abruptly left the stage without answering any questions or making any public statements to the displeasure of everyone in attendance.

A source from Rousey’s camp told RingTV.com last week that Rousey doesn’t plan on making any comments or fulfilling any media obligations leading up to this fight, with her only focus on reclaiming her belt.

Regardless if she talks or not one thing is for certain, the UFC and fans everywhere have missed the “Rowdy” one and her return can’t come quick enough.