A hectic conclusion to 2015 in Japan 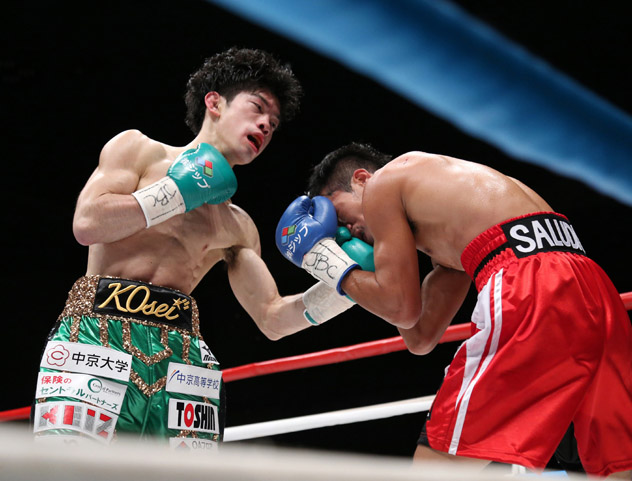 As a boxing junkie, one of the things I love about this time of the year is the quality and quantity of boxing shows that take place in Japan.

This year, four major shows took place, one on Tuesday in Tokyo and three today, in Nagoya, Tokyo and Osaka. In total, the four promotions saw seven major title fights.

Here’s a round-up and my thoughts on each bout.

The Tuesday show saw the much anticipated return of burgeoning star and WBO junior bantamweight titlist Naoya Inoue, who showed no ill effects of his previous hand injury or ring rust from a year on the sidelines, easily demolishing mandatory challenger Warlito Parrenas in two rounds. Now that the “Monster” has returned and looks just as good as ever, hopefully the hand injury is behind him and he can have a more active 2016.

Parrenas entered the fight perceived as a puncher but is also someone who had been stopped four times. Going forward, Inoue can expect tougher challenges. Rumor has it he could fight Omar Narvaez in a contractually-obliged rematch next and in America. Fingers crossed because that would allow him to make a huge step toward stardom.

Former two-division beltholder Akira Yaegashi made a huge late play for “Comeback of the Year” with a terrific exhibition of boxing that left defending IBF junior flyweight titleholder Javier Mendoza befuddled and defeated. Both fighters exchanged with regularity and, late in the fight, Yaegashi, who was clearly ahead on the cards, even looked to get the stoppage. To the Mexican’s credit, he gritted his teeth and saw the final bell.

It’s hard not to be pleased for Yaegashi who became a three-division champion, having previously reigned at strawweight and flyweight. Throughout his career, he’s fought a who’s who of boxing’s best little men over the past decade, including Eagle Den Junlaphan, Kazuto Ioka and Roman Gonzalez.

In an age when we focus on boxers’ glossy unbeaten records, Yageashi is a blood-and-guts warrior, who, despite an average looking 23-5 (12 KOs) ledger, is a top performer, always worth watching. He looked finished when Pedro Guevara stopped him a year ago but, once again, he showed he can mix with the best, doubtlessly knowing his career was on the line. Mendoza’s trainer/manager, the legendary Erik Morales, suggested a rematch may take place. Who wouldn’t like to see that? If not, you can bet Yaegashi will challenge himself sooner rather than later. It’s simply what he does.

It’ll be interesting to see how the recently-turned 20-year-old is matched going forward. He clearly has the skills to win a world title but lacks the power of big brother; he has only one KO in six fights so far. He obviously won’t face Naoya; he’s rated No. 5 by the WBC, No. 13 by the WBO and No. 15 by the IBF. Although unranked by the WBA, a fight with the vastly more experienced Kohei Kono would be a big match-up in Japan and also provide Takuma with the best opportunity to win a major title.

Battle-hardened Satoshi Hosono retained his National featherweight title by split decision over former 122-pound titlist Akifumi Shimoda. Hosono is a Top 10 contender and capable of fighting for another world title – he’s ranked by all four main sanctioning bodies. However, at 32, with a lot of miles on his odometer, it’s tough to see him beating any of the current champions. The three blemishes on his record were all in world title matches.

Ryo Matsumoto, who was the subject of a March 2016 “New Faces” feature in THE RING magazine, continued his impressive start to his career stopping Jestoni Autida in two rounds. Expect the junior featherweight prospect to step up next year. There was also the debut of Naoya and Takuma’s cousin, Koki, who won his debut at 140-pounds.

The youngest alphabet titlist in boxing was down in the fifth and behind on the scorecards when he landed a debilitating bodyshot that nearly broke the Filipino challenger in two.

Tanaka has high hopes for the future but he still has plenty to learn. It may be wise for his team to hold him back for a couple more fights to allow him to gain further experience. He loves to brawl, making him good TV, but there is no rush to face the big names just yet. Also, Tanaka is still very young, he fought just twice in 2015; he needs to be kept more active in 2016.

Arguably the most evenly matched fight on paper going into the busy year-ending schedule in Japan took place in Osaka where flyweight Kazuto Ioka and Juan Carlos Raveco met in an eagerly anticipated rematch.

In the spring, Ioka eked out a razor-thin majority decision that could have easily gone the other way. Since moving up to flyweight, Ioka hasn’t looked the force he was at 105 and 108. However, he was supremely motivated to see off the teak-tough Argentinean, doing so in 11 rounds, dropping Raveco with two well-timed body punches.

Beating Raveco is the 26-year-old’s career best win. He’s still behind Roman Gonzalez, Juan Francisco Estrada and the only man to have beaten him, Amnat Ruenroeng, but it appears as though Ioka has now found his flyweight feet. He’s shown a willingness to face the best. Here’s hoping he continues to push himself, there are many challenges for him in the deep talent pool at 112.

On the undercard of Ioka-Raveco II, Katsunari Takayama lost his IBF strawweight strap vs. No. 8-ranked Jose Argumedo. Takayama was cut from a clash of heads early on and fought as he always does through crimson. The fight was stopped at the end of the ninth round and, with the fight going to the scorecards, the Mexican challenger prevailed by close, split decision. Ironically Takayama had retained his title in April by technical decision.

Takayama is an old 32; he gets cut nearly every time he fights though, due to the closeness and controversy of the decision, we can expect a rematch when his cuts have healed. Just a thought but if Takayama elects to move up to junior flyweight – something to which he hinted prior to this fight – how about an uncivil war with Yaegashi? It’s as can’t-miss a fight as you can get.

In the final show of the busy day, WBA junior lightweight titleholder Takashi Uchiyama stopped Oliver Flores in three rounds to clear the way to a fight with former featherweight beltholder Nicholas Walters next year.

Uchiyama, 36, is universally recognized as the Numero Uno at junior lightweight; his tenure as champion has seen him make 11 title defenses and a bout with Walters would allow him to prove his superiority to those in the West.

On the undercard, junior flyweight Ryoichi Taguchi forced Luis De La Rosa to retire on his stool at the end of nine rounds. It was Taguchi’s second defense. He’s the kind of guy who goes under the radar but has wins over recently-minted WBC beltholder Yu Kimura, former WBA kingpin Alberto Rossel and has gone the distance with Naoya Inoue. There are several intriguing possibilities for him against Randy Petalcorin or an up-and-comer like Ken Shiro, who scored an impressive win a couple of days ago to win the Japanese title.

All in all, it was a very exciting few days in the “Land of the Rising Sun.” Yaegashi winning a major strap at 108 is likely the highlight, though Ioka and Uchiyama’s wins could lead to bigger things in 2016. Stay tuned for post-fight features on Yaegashi and Naoya Inoue.