Amir Khan: ‘I will give Kell Brook that much of a beating’ 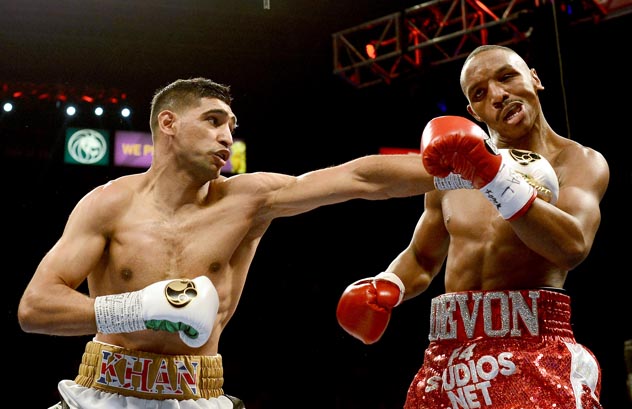 Amir Khan insists he is happy to fight IBF welterweight titleholder Kell Brook in a “winner takes all” battle some time over the next year.

However, almost as soon as Khan had delivered his declaration of intent early on Tuesday, Brook’s promoter, Eddie Hearn responded by expressing serious doubts over the sincerity of the pledge.

Indeed, the Matchroom Sport supremo, who wants to stage the much-anticipated, all-British grudge clash this summer at Wembley Stadium, reckons Khan’s comments are nothing more than an attempt to diffuse the public clamor for him to face unbeaten Brook (34-0, 23 knockouts), THE RING’s No. 2-ranked welterweight.

“Generally, everybody wants this fight. This is a natural fight with two great fighters,” Hearn said on Sky Sports News HQ. “I’ve been trying for years and years to make the fight and Amir’s always told Kell to go and win a world title. Well, he’s done that.

“We’d love to fight Khan now. June 13 at Wembley is there for him but there’s no real interest from Khan in the fight. Unfortunately for Amir, though, Kell’s stock continues to rise. He smashed the ratings on Saturday and his last two fights have been on Showtime in America – the same network as Floyd Mayweather Jr.

“Kell has been on the phone to me and says he wants to fight twice more before the end of the summer so, like I said, talk is cheap. They aren’t even entertaining any negotiations for this fight but they have to put on a brave public face now because the demand is so strong.

“Kell’s in a wonderful position. He’s had 34 fights. He’s had 34 wins. He’s also the IBF world champion in the same division as Manny Pacquiao and Floyd Mayweather Jr. Things are great for us.”

Hearn’s interview followed hot on the heels of Khan, THE RING’s No. 3 147-pounder, telling Sky he does want to face the Yorkshireman but not in the immediate future.

He was also quick to trash Brook’s antics last Saturday when, having just defended his belt with a comfortable fourth round TKO against Romanian challenger Jo Jo Dan, he called out his bitter rival from Bolton while still in the ring at the Motorpoint Arena.

“It could be his last fight because I will give him that much of a beating,” said 28-year-old Khan (30-3, 19 KOs). “Maybe that’s why he wants it because he knows this one fight against me will financially secure him for the rest of his life.

“Straight after the fight on Saturday, he is calling me out. I am watching him and his promoter, Eddie Hearn, getting really excited saying they are going to fight Amir Khan. They were like two little kids in a boxing ring.

“It will happen one day and, look, if Kell really wants to fight me, then let’s have a ‘winner takes all’ fight. I’ll do that or we could have a huge bonus for the winner and a little something set aside for the loser. We’d want to give him a little guarantee. But there will be a big lump sum for the winner. That’s how confident I am of beating Kell Brook.

“It’s all about timing. If I’ve got a different route and I want to face the likes of the Mayweathers and Pacquiaos out there, then Kell Brook will have to wait. We don’t want to rush this fight because it is going to be a big fight. It’s going to be a huge fight but it’s all about the timing.”