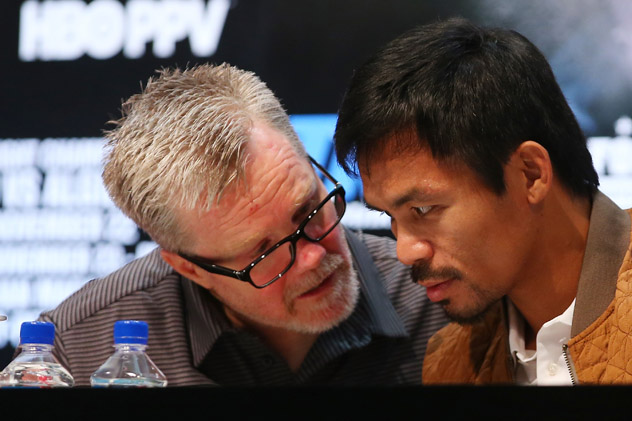 I hear no shortage of folks out and about saying this Floyd Mayweather Jr. vs. Manny Pacquiao fight boils down pretty simplistically. Here’s the syrup, they say: Manny Pacquiao goes life and death with the Mexican counter-punching ace Juan Manuel Marquez when they glove up and Mayweather handled Juan Manuel Marquez as if he was a neophyte sparring partner when they gloved up back in 2009.

Makes some sense on the surface. Maybe even beneath that, if you figure that anything Marquez can do, Floyd can do a tick or two better. So what about it, Freddie Roach? Is it as simple as that? Because “Money” manhandled Marquez, will he likely have the same sort of luck with Pacman?

Consider a scenario that some accept. “Fighter A (Pacquiao) has trouble with Fighter B (Marquez) every time. And since Fighter C (Mayweather) had NO trouble with Fighter B, that means that Fighter A (Pacquiao) will have tons of trouble with ‘Fighter C (Mayweather).” Now let’s apply that logic to a 1970s-era round robin involving Ruben Olivares, Bobby Chacon and Danny “Little Red” Lopez. One might think that since Fighter A (Olivares) easily handled Fighter B (Chacon) the first two times they met, Fighter A should cruise past Fighter C (Lopez) because Fighter C was stopped by Fighter B. But noooooo. When Olivares met Lopez in ’75, “Little Red” got the W (KO 7). Long story short … or is it short story long? ÔÇª styles make fights. You simply cannot reduce a scrap like Mayweather vs. Pacquiao into such simple deductive reasoning.

Not surprisingly, Roach, who is in China this week counting down to his flyweight contender Zou Shiming’s tangle vs. Amnat Ruenroeng of Thailand on Saturday (2 p.m. PT / 5 p.m. ET, on HBO2), doesn’t buy the A-B-C logic. And boxing has a trillion examples to support his reasoning, Roach told me.

Sure, results against common opponents can provide hints. And, indeed, on May 2, it may play out as Team Mayweather is saying it will. Floyd might simply have Manny’s number like he had Marquez’s and as Marquez had at that moment when he caught Pac-Man with a brain-rattler right in December 2012.

Roach, who campaigned as a pro from 1978 to 1986 and has been named BWAA Trainer of the Year seven times, reminded me. “Styles make fights,” he said. “[Miguel] Cotto went the distance with Mayweather but didn’t go the distance with Manny. That ‘Fighter A-Fighter B’ logic is way too simple. Manny is a whole different animal. Styles make fights. Every fight is different.”

Of course, we’ll see how this plays out. The variables are numerous and fate can have a way of throwing an unhittable curveball at us when we were thinking fastball all the while.

Here’s a variable: Freddie told me he likes Manny’s chances a tick more with Floyd Sr. running the ship, rather than Uncle Roger. “Floyd [Jr.] has had more success with Roger than anybody,” Roach said. “With Senior, Floyd is more defensive and we know maybe he’ll run a bit more. Yes, Roger is the A-side of that team, not Floyd Sr.”

Check back on my Twitter timeline from more gold from “Dedham Freddie,” as he talks about the expectations of the masses for Mayweather-Pacquiao and why maybe – just maybe – casuals and those parachuting into boxing for just one evening might want to do their homework on Mayweather before they start thinking they know what type of fight they will see.