Sadam Ali on Luis Carlos Abregu: ‘I want to thank everybody who doubted me’ 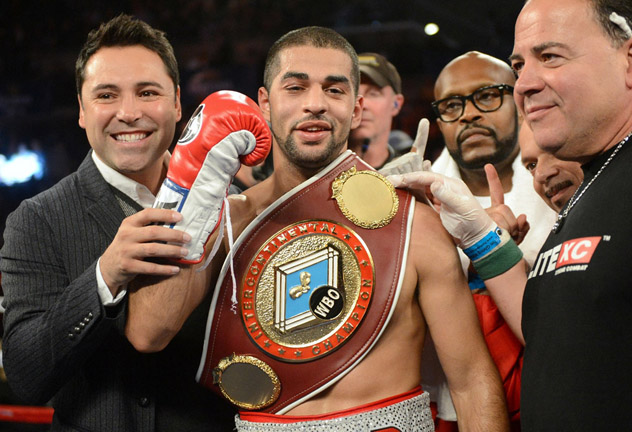 Ali’s father, Mahmoud admitted his son was taking “not just one step but 20 steps up” against Abregu, 30, who entered the fight with a mark of 36-1 that included 29 knockouts and having won seven straight fights, six by stoppage, since falling by unanimous decision to Tim Bradley in July 2010.

In addition, via a poll of 19 insiders conducted by RingTV.com, 16 chose Abregu to defeat Ali, with 10 believing the younger man would lose by stoppage.

Ali had produced knockouts in five of his previous seven fights; he had been floored in the first round during a unanimous decision over lightly-regarded Jay Krupp in September 2013 and had struggled during his previous bout in August, a a split decision victory over Jeremy Bryan.

That plan worked to perfection for Ali (21-0, 13 KOs), who dropped Abregu once each in the sixth and final rounds of a ninth-round technical knockout.

Ali said he benefited from the pre-fight counsel of two-division titlist Paulie Malignaggi, who, like Ali, is from Brooklyn.

“I said that the only way that you’re going to make a mistake is if you allow the moment and the crowd get to you. ‘You’re a far better boxer,’ is what I said, and that he’s not a good enough boxer to make you make a mistake. I said that the only the only way that you combat that is that when you enter the arena and you see the crowd members wanting to touch you and reaching out your hand, you hear all of the music, at the same time, you’re walking into the ring, go over your game plan in your mind…You want to be prepared for that first round.”

During the fight, said Malignaggi, “I also kept yelling to him to be smart and to trust yourself,” adding, “I didn’t want him to use his legs too much. At one point, I knew that he saw something, so I kept emphasizing to him to ‘Trust yourself.'”

Some of Ali’s post-fight comments are as follows:

Sadam Ali on his overall performance:

“I’m very happy with my performance. Abregu is a tough guy and he’s got that knockout power but I stayed focused throughout the whole fight and it was amazing. I’m excited for what’s next. I’ve been boxing since I was eight years old and I’m 26 right now, so it’s been 18 years. I knew that I could do this. I really did.

“I went out there and did what I had to do but honestly, I feel that I can do even better…I’ve always had confidence and I always knew that I could do it but just seeing it happen really builds my confidence even more.

“I’m going to go back and talk to Golden Boy and see what we’ve got next and then take them by storm. We have to go back and see what’s next for me. It might be a title fight or it might not be. It only goes up from here. I can’t really call the shots; I just have to wait and see what happens.”

On Malignaggi’s instruction and direction:

“Paulie was telling me to stay focused, even coming out to the ring; don’t let all of the fans and everybody make you lose your mind and lose focus on what you’ve got to do in that ring.

“That really helped me because it does take your focus off when you’ve got everybody cheering for you and with the music playing and everything, so I just stuck to my game plan and just kept on going.”

“Fight here with the crowd and everything, this was a big moment for me and now, I’ve had that experience in me and I knew I could do it. If you believe, then you can achieve and that’s what I stuck to.”

On the early rounds:

“I knew that he was going to try to come out strong in the beginning rounds and try to catch me with a shot and knock me out and end the fight early and make it an easy night for him. So in the beginning, I was being cautious and figuring things out and after a while, I figured it out and I took over from there.”

“I did feel his power. He can definitely crack. He hit me with something, I’m not sure what it was. I think that he hit me with a left uppercut. I don’t remember what round it was but he has power.

“So I just kept my composure and stayed smart and the one thing that God gave me is the ability to recover when I’m hurt and not everybody has that and I’m very happy that I do.”

On the temptation to go toe-to-toe:

“Sometimes, you want to go toe-to-toe because I’m the type that you want to please the fans. I like making the fight exciting but I can’t give Abregu what he wants because that’s his fight.

“He’s a little flat-footed and he has tremendous power and in his mind, the way for him to beat me is for him to knock me out, so there were times where I would step in and throw hard punches but overall, I had to be smart and out-box him.”

On allowing the knockout to develop:

“For sure, we had seen Abregu fight and we’ve seen him get clipped very hard and yet he always gets back up, so the knockout wasn’t what I was looking for. I thought that if it came, then it came but I prepared for 10 rounds.

So I was just trying to win round by round and it came. I kept up my movement and making him miss and making him work to hit me and I knew that if I did that, then I would get the victory. I just stuck to my game plan and it worked. It’s a beautiful feeling. I saw that he was hurt.

“But I didn’t think that he was weakening out. So I just stayed on him and the referee called the fight. I was ready to step up and I made this count. This was big for me and now, I’m ready to continue climbing that ladder.”

On struggling with Bryan in the previous fight:

“I take nothing away from Bryan but I was weak because I was fasting for Ramadan and you learn your lesson all the time. So my lesson was not to fight around the time where you’re fasting for Ramadan. But Oscar De La Hoya believes in me and he knows what I’m capable of doing. I just went out there and I did it.”

“It’s a motivation. Just watching the Brooklyn guys come up and if you put your mind and your time into it just like Paulie does, you can do it. You know, Paulie was in my ear, giving me good advice and that was awesome.”

On being the underdog: