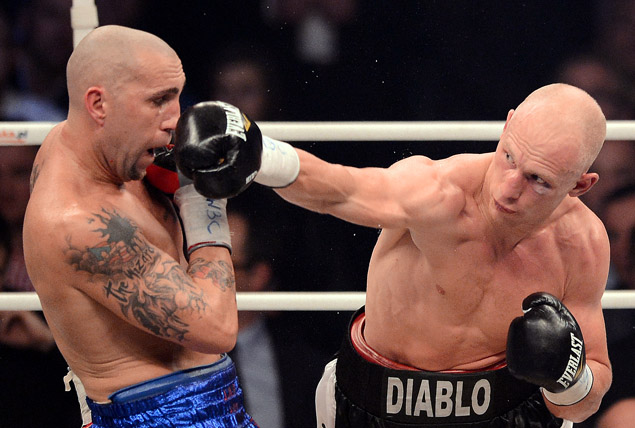 Polish cruiserweight Krzysztof Wlodarczyk will defend his WBC belt against Russia’s Grigory Drozd and Russian WBA counterpart Denis Lebedev will defend his title opposite Poland’s Pawel Kolodziej on Sept. 27 at the Dynamo Palace of Sports in Krylatskoye, Moscow.

Integrated Sports PPV announced on Monday that it will televise the Poland versus Russia doubleheader, which is being promoted by Andrey Ryabinsky of World Boxing. Start time is slated for noon ET/ 9 a.m. PT., according to a release.

Wlodarczyk (49-2-1, 35 knockouts) will be after his third straight stoppage win and is coming off a sixth round stoppage of Giacobbe Fragomeni, whom he defeated for the vacant belt by eighth round technical knockout in May 2010.

Drozd (38-1, 27 KOs) was last in action in March when he scored a first-round knockout of Jeremy Ouanna.

In his last fight in May 2013, Lebedev was knocked out in the 11th round by ex-beltholder Guillermo Jones. Lebedev’s title was returned, however, after Jones tested positive for the banned substance Furosemide, the same substance of which he again tested positive, forcing the cancelation of their rematch last month.

Kolodiej was last in action for a seventh round stoppage of Prince Anthony Ikeji in November.

On Monday, Arum said the bout will officially be announced “either this week or next week” after the accompanying undercard bout has been determined.

In facing Beltran, Crawford will return to the site where he scored a come-from-behind ninth-round technical knockout victory over former featherweight beltholder Yuriorkis Gamboa before 10,943 of his partisan fans in June.

“The target date is Nov. 29 and I think that as enthusiastic as the crowd was the first time, I think that there will be even more excitement the second time for Terence,” said Arum during the earlier interview with RingTV.com.

“You have to remember that the first time, we were selling to people on the fight who hadn’t seen one ever before. I would say that a great majority of the people who attended the fight, that was the first fight show that they had ever seen.”

Crawford-Gamboa represented the first title fight in Omaha since heavyweight champion Joe Frazier beat Ron Stander by fifth round knockout in 1972 and Crawford is the state’s first titleholder since Perry “Kid” Graves from won the vacant welterweight crown in 1914.