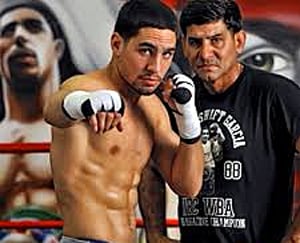 Rod Salka said that he plans to improve on tactics that Mauricio Herrera used trouble Danny Garcia when he challeges THE RING's junior welterweight champion at Barclays Center in Brooklyn on Aug. 9.

"I think that Herrera did a great job," said Salka, 31, during a recent interview with RingTV.com. "Herrera was in and out. He smothered him on a lot of his counters and I feel as if I can do a lot of the same stuff. I feel like I'm even more energetic and that maybe I'm even a little bit faster."

But during a recent press conference at Barclays Center, Garcia's father and trainer, Angel Garcia, said Salka is in for a rude awakening against his son.

"Salka can try to come in. He can work hard," said Angel Garcia. "But don't look at the Herrera tape because you'll get confused. Danny Garcia is a chameleon."

In his last fight in April, Salka (19-3, 3 KOs) dropped previously unbeaeten Alexei Collado with a third round left hook on the way to an upset unanimous decision victory before his own fans at the Convention Center in Monroeville, Pa.

Salka won by scores of 96-94 and 96-93 (twice) over Collado, after having previously been in the ring in December for a disputed majority decision loss at junior welterweight to Ricardo Alvarez, the older brother of Mexican star Saul Alvarez.

Salka will look to use similar tactics to those used by Herrera against Garcia, as well those he, himself, employed against Provodnikov. Salka also said that he will benefit from his experience gained against Garcia during an amateur bout that he believes he should have won.

"I fought him once in the Golden Gloves finals and that was right before I turned pro," said Salka, during his interview with RingTV.com. "He was number one in the country at the time and I thought that I beat him then and he got that decision."

Still, Angel Garcia said Salka will be in for a rough night on Aug. 9.

"Just because Danny had an awkward night (vs. Herrera) doesn't mean it's going to happen again," said Angel Garcia. "He's going to come in to destroy and conquer."