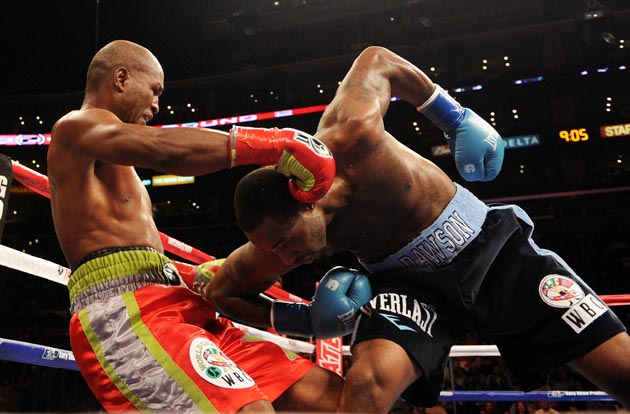 Although referee Pat Russell had originally ruled Bernard Hopkins–Chad Dawson a second-round TKO for Dawson, it was Russell’s testimony on Tuesday which weighed heavily in the decision of the California State Athletic Commision to render a no-decision verdict.

Hopkins, THE RING light heavyweight champion as well as the WBC beltholder, still is recovering from a left shoulder separation following his controversial fight with Dawson on Oct. 15, which was initially ruled to be a TKO for Dawson after Hopkins was shoved to the canvas and deemed unfit to continue by Russell.

On Tuesday, however, Russell’s testimony helped to influence the CSAC to change Hopkins-Dawson to a no-contest. This followed the actions of the WBC, which soon after the fight had restored Hopkins as titleholder following a majority vote of board members who disagreed with Russell’s call and ruled the fight a “technical draw.”

Click here for an official report on Russell’s full testimony before the CSAC.

“We’re going to look at every possibility. Everything is on the table — instant replay, consulting with the ringside judges, consulting with chief inspector at ringside. Whatever we are going to come up with will be after we sit down at a table and try and craft something that will address this very issue. To the credit of the athletic commission, they want to do the right thing.”

Furthermore, on Thursday, promoter Gary Shaw successfully argued for a return bout between Hopkins and Dawson during a hearing at the WBC’s ongoing convention at the Mandalay Bay Hotel in Las Vegas.

Although early indications are that Hopkins will agree to a rematch, Golden Boy Promotions CEO, Richard Schaefer, said “I think the decision stinks if you ask me.”

“I think that it’s terrible. There wasn’t much interest in the first fight, so, I really think that they should have allowed Bernard to do a voluntary defense. Bernard is okay fighting anybody and everybody, so that’s not Bernard’s opinion, but you are asking for my opinion. But I say that because Chad Dawson was Bernard’s mandatory and Bernard did his mandatory,” said Schaefer.

“The WBC ruled it a draw, and I think that was important. So I don’t really know what legal grounds they have to order a rematch because Bernard did his mandatory, and the WBC rules say that it was a technical draw. So why would there be a rematch. I don’t understand it. I think that next time, I’m going to ask them for a rematch too if it doesn’t go our way. I think that it’s horrible. But I’m very busy with a lot of things, so it’s not like it’s going to happen today or tomorrow.”