Tom Loeffler of 360 Promotions breaks down the stacked line up for the return of his Hollywood Fight Nights club show series, which returns tonight, Sept. 16 (Mexican Independence Day), on UFC Fight Pass (in association with Roy Jones Jr. Boxing Promotions) from the Quiet Cannon country club in Montebello, California. 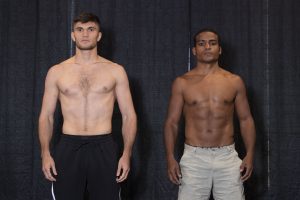 Co-headliners Serhii Bohachuk (19-1, 19 KOs) and Ali Akhmedov (16-1, 12 KOs), two prospects looking to bounce back from their first pro losses, shook out for the media during a public workout in South El Monte, California on Sunday, and then gave their interviews to RingTV (along Marco Deckman and their respected trainers – Freddie Roach, Johnathon Banks and Manny Robles Jr.).

On Wednesday they weighed-in along with the rest of the stacked card.

The results of the weigh-in are listed below:

An all-star lineup of boxing’s best trainers lead their charges into the ring. 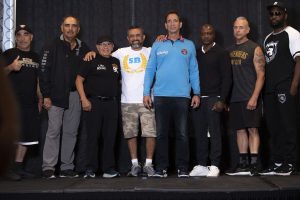 Top trainers will be working the Hollywood Fight Nights show.