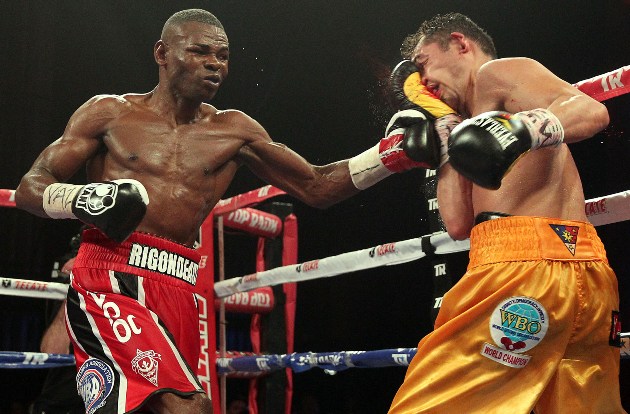 The HBO-televised broadcast will begin at 11 p.m. ET.

Donaire (31-1, 20 knockouts) is after his third straight stoppage win against Rigondeaux (11-0, 8 KOs), a southpaw, two-time Cuban Olympic gold medalist who is after his fourth knockout in five fights.

Rigondeaux enters the ring first, wearing a red, white and blue robe. Looks pretty cut when it is removed. Rigondeaux received his share of cheers from the crowd. His upper torso is glistening already.

Donaire’s turn. He’s in the ring weating a yellow and black robe.

Michael Buffer’s behind the microphone, crowd is warming up. “Let’s Get Ready to Rumble.”

Rigondeaux introduced first, receives a mixure of boos and cheers.

Round 1: Crowd chants “Nonito” even before the round begins. It’s on. Donaire’s body sweating. Donaire jumps in with a left that is short. The southpaw Rigo lands two solid lefts, the first rocks back Donaire. They’re circling. Rigo wants to land another left, and does to the body. Donaire measures. Jab by Donaire lands. Three more lefts by Rigo. Donaire looks cautious. Right by Donaire gets Rigo’s attention. Rigo maintains his ground. Nice right at the buzzer by Rigo. Rigondeaux’s round, 10-9

Round 2: Donaire takes a short right to start the second. Rigo has the left poised for action. Crowd chanting “Rigo.” Donaire tries to land two failed rights. Crowd chants “Nonito.” Rigo circles. Gives ground but still is winning with his jab. Nice left to the body by Rigo. Solid left and right by Rigo and another left all by Rigo. Good movement. Donaire takes a left coming in. Donaire stretches a right to the body. Rigondeaux, 10-9; Rigondeaux, 20-18

Round 3: Donaire comes out more purposeful. Rigo misses a chopping right hook. Donaire ducks into consecutive lefts. Donaire blocks a left and lands a right hand. Donaire misses a wild right. Donaire double on a right uppercut and a right hook. Another left by Rigo, who dances away. Great technical control by Rigo. Right by Rigo. Right by Donaire. Rigo closes with a winning exchange that draws gasps from the ringside press. Rigondeaux, 10-9; Rigondeaux, 30-27

Round 4: Rigo’s mix to the head and body is working. Short right and left land for Donaire, but Rigo clinches. Donaire tries to close the gap. Three hard rights by Donaire. Nice jab pumping for Donaire. Donaire blocks a left. Nice left by Donaire, who also lands a right to the body. Nice left to Rigo’s head, but Donaire takes a right. Donaire takes a couple of lefts to the body. Rigo warned for for straying low. Donaire shakes Rigo with a right, but Rigo comes back with a hard, counter-left. Donaire’s round, 10-9; Rigondeaux, 39-37

Round 5: Rigondeaux’s pacing to regain control. Donaire is briefly on his toes. Rigo times a left that is blocked. Donaire jabs and lands. Donaire lands a short right. Crowd boos the lull in action. Donaire can’t get a bead on Rigo, who wins the dull round on movement and his jab. Rigondeaux’s round, 10-9; Rigondeaux, 49-46 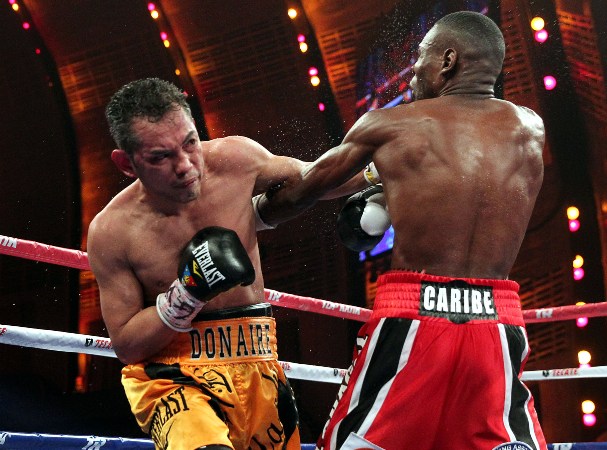 Round 6: Donaire looks supremely confident, using his right jab as a range-finder. Donaire can’t seem to get past it. Donaire’s gets in a right uppercut, but then backs off. Hard left cross by Rigo over the right hand of Donaire. Boxing lesson. Rigo’s feints won’t let Donaire gain rhythm. Decent left by Donaire, but Rigo takes another round. Rigondeaux, 10-9; Rigondeaux, 59-55.

Round 7: Rigo still paws the jab and throws the left over it. Donaire doubles on the left hook to the head and body. Donaire’s eyes are getting puffy. Decent left by Donaire, but he is unable to follow up due to Rigo’s movement, side to side and around him. Donaire is simply following and can’t seem to get off. Crowd boos, but Rigo’s being effective with an occasional up-jab. Rigo lands a short left at the bell. Rigondeaux, 10-9; Rigondeaux, 69-64

Round 8: More of the same to start the eighth. The crowd is booing, but the sport is boxing. And Donaire is being out-boxed. Each time Donaire comes with a left, Rigo ducks under it and goes back to movement and the jab. Donaire rakes a jab, but can’t follow up. Rigo taps two up-jabs and moves away. Donaire digs a right to the body, but again, Rigo is gone. More jabbing and moving by Rigo, more boos from the crowd. Rigo closes with a straight left and right hook. Rigondeaux, 10-9; Rigondeaux, 79-73

Round 9: Donaire touches off a three-punch combo to start, but not solid. Donaire gets in a right, left, right that stirs the crowd. He has trouble landing consecutively. Left uppercut by Rigo. One-two to Donaire’s head and body. Two rights by Donaire. Nice straight left by Rigo. Good jab by Rigo. Two more Rigo jabs. Another Rigo jab. Donaire whiffs two of his last three punches. Rigondeaux, 10-9; Rigondeaux, 89-82.

Round 10: Rigo goes down as their bodies tangle. Referee Benjy Esteves rules it a slip. Donaire drops Rigo with a counter-left off the clinch. He’s up quickly. Crowd’s abuzz. Donaire lands another right, but takes a short left. Another solid left and then a right. Solid left by Rigo, but Doaire takes it. Crowd’s chanting “Nonito,” but he has trouble following up. Rigo seems to have recovered completely. Decent right at the bell by Donaire. Donaire, 10-8; Rigondeaux, 97-92. 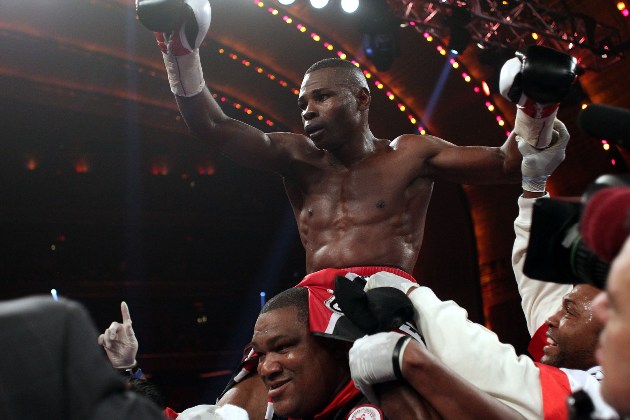 Round 12: Rigo opens with three hard lefts that back up Donire. Donaire is pawing his left eye after the fighters tumble through the ropes. Donaire is protecting his right eye with his right glove, and takes a left as he cowers. Donaire takes a hard left and looks to be shaken. Rigo is delivering punishment along the ropes. Donaire’s eye is swollen and he’s badly bleeding from the right eye. Meanwhile, Rigo easily wins the round, and, according to RingTV.com, the fight. Rigondeaux, 10-9; Rigondeaux, 117-110