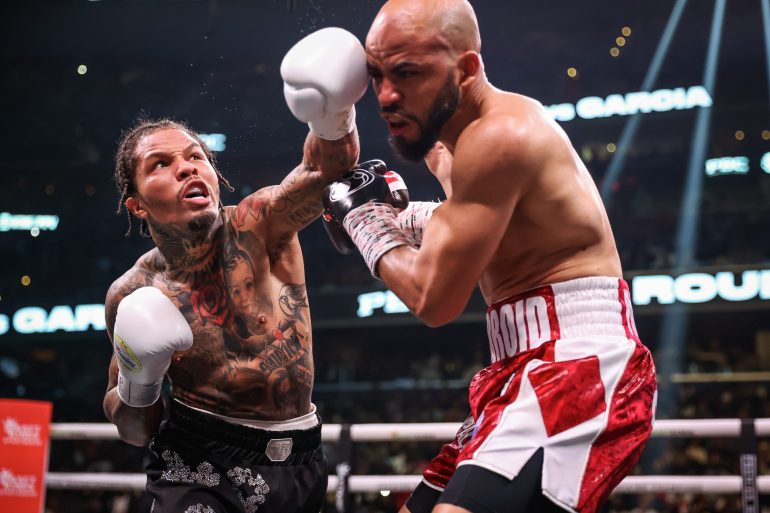 Gervonta Davis' eighth-round attack was the beginning of the end for Hector Luis Garcia. Photo by Amanda Westcott-SHOWTIME
08
Jan
by Joseph Santoliquito

WASHINGTON, D.C. — The one place in the world lightweight star Gervonta Davis can find solace is in the ring. Throwing punches, taking punches, it doesn’t matter. The southpaw bomber from Baltimore, Maryland, can make his troubles go away.

Before a sellout crowd of 19,731 at the Capital One Arena on Saturday night, Davis (28-0, 26 knockouts) made reigning WBA 130-pound titleholder Hector Luis Garcia (16-1, 10 KOs) go away with a late-eighth round uppercut that translated into a ninth-round knockout on the PBC event on Showtime Pay-Per-View.

This victory hopefully sets up a showdown between Tank Davis and Ryan Garcia on April 15 in Las Vegas.

“I wasn’t throwing a lot of shots (in the beginning) because I was trying to beat him mentally,” Davis said. “I was trying to trick him with my hands and my eyes and things like that because he’s a tough fighter. I had to bait him.

“His southpaw style bothered me a little bit because I don’t fight a lot of southpaws but it’s okay; it’s a part of the game.”

The first few rounds began slowly, but it seemed as if Davis was setting up Garcia by trying to lure him into a firefight.

Through three rounds, Garcia (16-1, 10 KOs), The Ring’s No. 2-rated junior lightweight, had a few occasions when he turned Davis around and hit him in the back of the head.

But as the fight progressed, Davis’ greater power began to surface. With 1:48 left in the fourth, Garcia landed a counter right to the body, and he was willing to bend down and work in the pocket, which fell right into what Davis wanted.

He nailed Garcia with a straight left, which got the crowd going, then followed with a right hook.

Midway through the sixth, Garcia decide to engage Davis again. He closed the distance and for a brief time, Davis went to an orthodox stance, then immediately switched back to his more natural southpaw look. 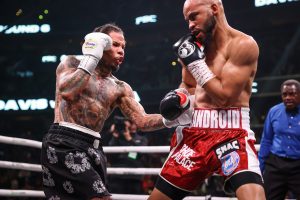 Tank Davis goes to the body on Hector Luis Garcia en route to his ninth-round stoppage (Photo by Amanda Westcott/Showtime).

With 2:08 left in the seventh, there was some ringside commotion right behind Davis’ corner and the fight was stopped by referee Albert Earl Brown. When the fight resumed, Garcia was lucky to get out of it.

Davis nailed Garcia with his vaunted right uppercut with :18 left in the eighth, causing Garcia to wobble. Garcia, visibly in trouble, survived the round—but he didn’t survive the fight.

Garcia returned to the corner telling trainer Bob Santos that he could not see. The fight was waved over from there.

“On my end I’m ready. I’ll be in the gym Monday. Well, not Monday. I’ll probably take a week off but I’ll be back for sure soon.

“I have to bring my people in close and listen to my close ones, listen to Al Haymon and just stay focused. There’s a lot of bumps in the road but if we stay focused together – that’s how I’ll (maintain) longevity in the sport.”

Calvin Ford can't WAIT for @Gervontaa and @RyanGarcia to meet in the ring 💢🥊#DavisGarcia pic.twitter.com/MGCXGX6AfY

Davis, 28, does face a serious situation on February 16 in Baltimore Circuit Court for allegedly leaving the scene of a car accident that occurred during the overnight hours of November 5, 2020, involving four people, one of whom was pregnant at the time.

A verdict against Davis could cloud his proposed megabout with Garcia in Las Vegas.