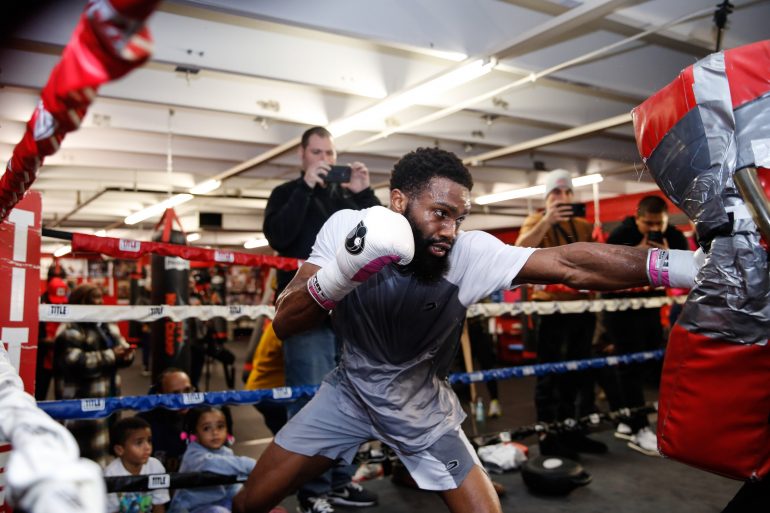 PHILADELPHIA — There is perhaps no boxer who better exemplifies the saying “trust the process” better than Jaron Ennis. The 25-year-old is approaching his 30th pro bout and has yet to receive a world title opportunity, despite being a rising star in one of the sport’s hottest divisions.

Instead of spending his afternoon griping about the politics of the sport, Ennis put on a show Tuesday at the media workout at Philly’s Next Champ Gym. While most bigger name fighters go through a superficial “show” workout, Ennis did twelve, four-minute rounds of work, giving reporters a glimpse at the intensity he routinely brings to the basement dungeon of a gym. It’s the kind of workout he does year-round to stay ready for whenever he gets his next fight date.

The only reason Ennis wasn’t in the gym on Christmas Day this year is because it fell on a Sunday.

Ennis (29-0, 27 knockouts) will face Karen Chukhadzhian (21-1, 11 KOs) on Jan. 7 at the Capital One Arena in Washington D.C. The interim IBF welterweight title will be at stake, and a win in the Gervonta Davis-Hector Garcia Showtime pay-per-view co-main event would put unified champion Errol Spence Jr. at risk of losing one of his three belts if he didn’t fight Ennis next.

That doesn’t guarantee Spence will fight him next, but it’s all Ennis can do to push the issue.

“I feel like Errol Spence Jr. would fight me. I’m going in there with the intention of winning the interim title, then fighting Errol next. I think we can make it happen,” said the switch-hitting Ennis, who wore SpongeBob Squarepants socks under his tennis shoes, which subtly undermined his “Boots” nickname.

If Ennis is frustrated with the situation, he hides it well. A pro since 2016, Ennis has slowly worked his way through the rankings, scoring early knockouts against increasingly better opposition while waiting for Spence or Terence Crawford or any other big name fighter to take the challenge. He fought just once in 2022, but hopes to fight three times in 2023.

“There’s no frustration because I feel like it’s coming soon,” said Ennis about a big fight against Spence or WBO titleholder Crawford. “The longer they wait, it’ll be worse for them. Hopefully we’ll get them soon.” 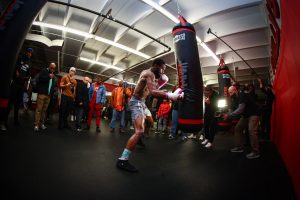 One adjustment Ennis could make is to generate demand for the fights with his words, but he also acknowledges that it could backfire and give the bigger names justification to stay away.

“I could talk trash but still never get the fight. He could be like, ‘Nah, I ain’t giving him the fight, he talks too much.’ That’s why I’m remaining me,” said Ennis.

In addition to Spence and Crawford, Ennis says he’d welcome bouts with aging former champions Keith Thurman and Yordenis Ugas, or the winner between Vergil Ortiz Jr. and Eimantas Stanionis. He’s also spoken openly about stepping up to 154 pounds for the right opportunity, and coming back down to 147 pounds if a big fight can be made.

First, Ennis will have to contend with Chukhadzhian, a 26-year-old Ukrainian who is based in Germany. The fight will be the first for Chukhadzhian in America, and will be just his second scheduled twelve rounder. The names on his record would only be recognizable if you are an avid follower of Tim Boxeo’s timeline on Twitter.

Ennis says he’s been watching a lot of Mike Tyson’s fights during this camp, and anticipates an “Iron Mike” type of finish.

“It’s safe to say we’re looking to have a short night on January 7,” said Ennis, who hasn’t gone the distance since his tenth pro fight in 2017.

“I feel like whatever he brings I’m gonna adjust. I read stuff fast, I pick up stuff fast and I break these guys down. It don’t really matter what you bring. I feel like he’s gonna be on his bike. If he comes forward that’s even better for me.”

Ennis theorizes that the established names in the division aren’t in a hurry to fight him because they remember what it was like being a hungry, up-and-comer knocking at the door. He says he’ll be different as a champion, taking on all top challengers before stepping up to 154 pounds to pursue titles in another weight class.

All Ennis can do is focus on the fighters who do agree to step into the ring with him.

“I don’t care who they put in front of me. They can put a brick wall in front me, you can put my aunt, my cousin, my nephew, I’m going to treat it like it’s a world title fight. I’m going in there to put in work and come out victorious,” said Ennis.

The Monday after the fight, January 9, Ennis says he’ll be back in the gym, working on improving for the next fight. If he has way, it’ll be day one of his preparations for a superstar opponent.