Emanuel Navarrete will face Liam Wilson in Arizona on Feb. 3 for a vacant 130-pound belt 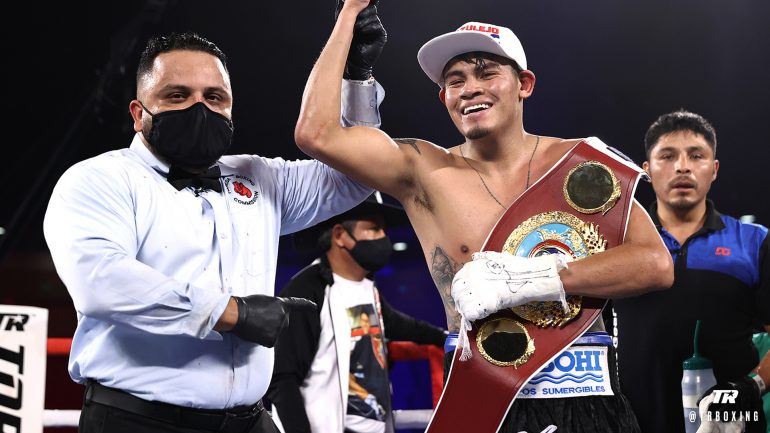 Emanuel Navarrete has earned fans and respect with his recent victories at featherweight.
20
Dec
by Ring TV

Navarrete (36-1, 30 KOs), from San Juan Zitlaltepec, Mexico, won the WBO junior featherweight crown from Isaac Dogboe in December 2018 and made five defenses of that title in a nine-month span. He out-hustled Ruben Villa to win the vacant WBO featherweight strap in October 2020 and has since defended that title three times. Navarrete is one of the sport’s premier offensive fighters, an aggressor who wings punches from all angles. In his October 2021 title defense over Joet Gonzalez, he threw 979 punches over 12 rounds, including 104 in the 12th round. He returned to the ring in August, rebounding from a slow start to knock out countryman Eduardo Baez with a body shot in the sixth round. The Baez victory marked Navarrete’s 31st consecutive victory dating back to 2012.

“This is my opportunity to become a three-division world champion. I am going for that crown,” Navarrete said. “Liam Wilson is a good fighter, but this is my moment, and everyone will see a much more complete ‘Vaquero’ Navarrete that has a lot of thirst for victory. My ideal weight is 130 pounds, and that will be demonstrated on February 3rd when I become world champion for Mexico and San Juan Zitlaltepec. Wilson will not get in the way of my dream.”

Wilson (11-1, 7 KOs), from Caboolture, Australia, is the WBO No. 3 junior contender. He has never fought away from his home country, but he will take the nearly 8,000-mile journey hoping to spring a major upset. Wilson stepped up to fight Navarrete after Oscar Valdez suffered a training injury and enters the fight with momentum on his side. After a stunning fifth-round TKO loss to Filipino contender Joe Noynay in July 2021, Wilson gained revenge in March with a second-round knockout courtesy of his “left hook from hell.” He kept the momentum going in June with a 10-round unanimous decision over former world title challenger Matias Rueda.

Wilson said, “He’s a champion, a warrior, and a household name around the world, but now it’s my time. I’m coming to upset the parade. I’ve waited my entire life for this moment, and I won’t let it slip because it means more to me. I swore an oath to my father on his deathbed that I would one day win a world title for him. I’m looking forward to fulfilling this promise on February 3rd.”

Barboza (27-0, 10 KOs), from South El Monte, California, is ranked in the top 10 by the WBC and WBO. The longtime contender turned pro in 2013 and has steadily climbed up the rankings with victories over Mike Alvarado, Alex Saucedo, and Antonio Moran. In July, Barboza returned from an 11-month layoff to snatch the ‘0’ from Danielito Zorrilla in a crowd-pleasing 10-round main event.

Barboza said, “It’s a big card, and there will be a lot of eyes on us. Pedraza is a formidable opponent. He’s my toughest to date and has only lost to the very best. I’m looking forward to the challenge. At this point, anyone I face is standing in the way of my goal, which is to win a world title. I am going to make a big statement on February 3rd.”

Pedraza (29-4-1, 14 KOs) ruled the junior lightweight and lightweight divisions before moving up to the junior welterweight ranks in 2019. He is 3-2-1 as a junior welterweight, having shared the ring with many of the division’s most notable names. In March, he pushed former unified champion Jose Ramirez 12 rounds before dropping a tight unanimous decision. Less than six months later, he battled former lightweight champion Richard Commey to a draw in a fight most observers believe Pedraza did enough to edge out. Pedraza had a Madison Square Garden main event against Teofimo Lopez scheduled for December 10th, but Pedraza withdrew with a non-COVID viral infection. The 33-year-old understands a victory over Barboza moves him closer to a world title opportunity.

Pedraza said, “I have recovered completely from the illness that obligated me to pull out of my fight with Teofimo Lopez. Right now, I feel 100 percent, and I know Arnold Barboza Jr. is one of the best fighters in the division. I’m sure this will be a great fight where I will reaffirm my level as an elite fighter at 140 pounds.”

Torrez (4-0, 4 KOs), from Tulare, California, captured an Olympic silver medal in Tokyo and turned pro under the Top Rank banner in March. A 6’2, 230-pound southpaw, Torrez has never been extended past the third round in his young career. In October, he shined at Hulu Theater at Madison Square Garden, thrilling the New York City fans with a third-round stoppage over Ahmed Hefny.

A number of undercard bouts will be streamed live on ESPN+ and will include many of Top Rank’s burgeoning young talents.

Lightweight sensation Emiliano Fernando Vargas (2-0, 2 KOs), son of former junior middleweight world champion Fernando Vargas, returns in a four-rounder against an opponent to be named. Vargas made his Top Rank debut in November and knocked out Julio Martinez in the second round with a highlight-reel left hook.

Sacramento native Xavier Martinez (18-1, 12 KOs) seeks his second straight ‘W’ in a 10-rounder at junior lightweight against an opponent to be named.