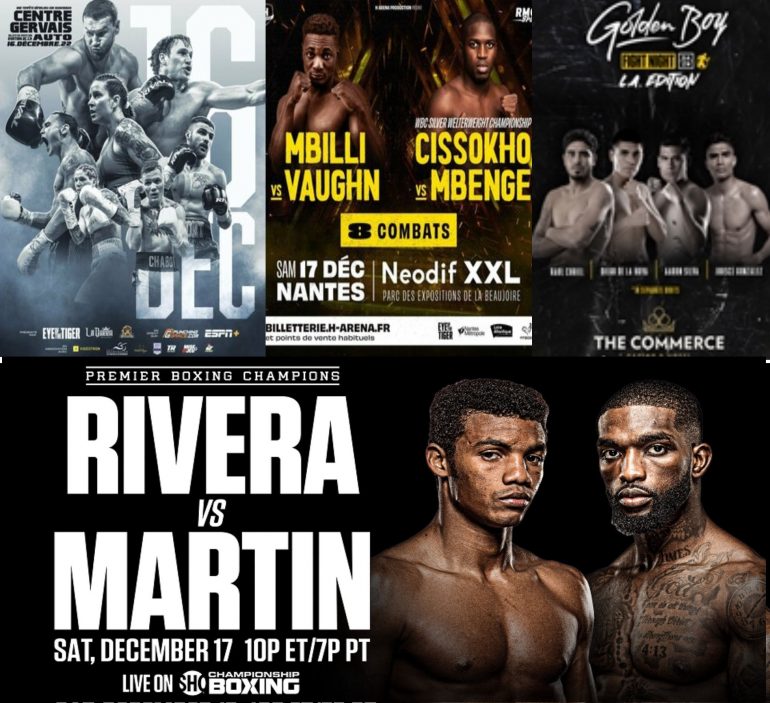 Fan favorite “Mickey” Roman never fails to entertain, and this homecoming bout should be quite entertaining while it lasts. Check in early to see top rated Diana Fernandez doing her thing, and especially the pro debut of Cuba´s Yosbani Veitia, one of the island’s most decorated amateurs.

Where to watch it: ESPN (Latin America)

The 6’5, 260-plus Russian-born Makhmudov knocked out his first 14 opponents, including 12 in three rounds or less. Germany’s Wallisch should be an interesting challenge in this stage of his career.

An intriguing clash of unbeaten prospects, with the dangerous southpaw Martin looking to spoil the party for Muhammad Ali-lookalike Rivera, a superb boxer with an entertaining and colorful style. Should be the fight of the week.

“Bolivita” Uzcategui has been a personal favorite of mine forever, and he has a tough call against the unbeaten Shishkin. Definitely a fight I will not miss.

Terrific showcase opportunity for the unbeaten Curiel, with an undercard that features a group of interesting prospects and the return of women’s boxing legend Braekhus. Should be fun.

Mbilli, a 2016 French Olympian, won his first 13 professional bouts by stoppage, and he returns home for the first time since 2019 to be tested by Alexander, a St. Louis native who is 2-0-1 in his last three fights.

The unbeaten Azeez will put his British belt on the line to go with the vacant Commonwealth title at stake in this intriguing matchup.

Fan favorite Billam-Smith is on the way up and riding a 7-0 streak since his only loss, and wants to make further progress against the once-beaten Kosovo product in this early crossroads clash.

Dubois is one of women’s boxing top prospects, and it will be interesting to see how she looks in this fight as she heads into main event territory.

Where to watch it: FiteTV, Sky (UK)

Where to watch it: FightHype