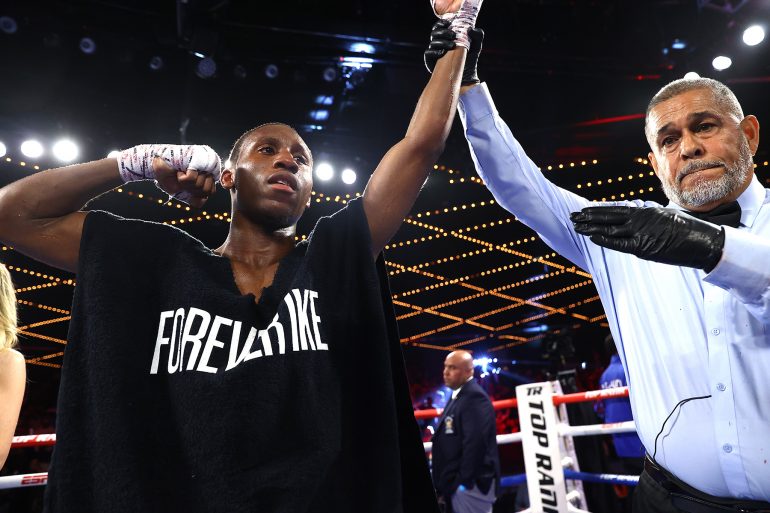 There is no shortage of undefeated prospects on Saturday’s card at Madison Square Garden, with 2020 U.S. Olympians Keyshawn Davis and Delante Johnson, plus other rising stars vying for attention on the Teofimo Lopez vs. Sandor Martin undercard.

Bruce Carrington, the Brooklyn-raised featherweight prospect, wants to be the fighter who stands out of the crowd in his hometown of New York City. The 25-year-old Carrington (5-0, 3 knockouts) will face Juan Tapia (12-4, 4 KOs) in his first eight-round assignment. He says he’s done his homework, having seen Tapia fight his gym mate James Wilkins almost a year ago to the date on the Vasiliy Lomachenko-Richard Commey undercard.

He believes he’s ready to impress in front of his hometown crowd.

“It’s really important to stay fresh in the audiences’ mind because the fans are what make you a star. If I continue to put on good performances I’ll keep being remembered. Because if you’re a great fighter and nobody’s talking about you, then you’re as good as nothing,” said Carrington, who has been known by the nickname “Shu Shu” since his amateur days.

The fight will be Carrington’s fourth straight in the New York area. He last fought at the Prudential Center in Newark, shutting out Jose Argel over six rounds in September, and had stopped back-to-back opponents at the Hulu Theater at Madison Square Garden before that.

Saturday will be his first time fighting in the main arena of Madison Square Garden, which he says has always been a dream of his.

“I always fought in the Hulu Theater in the New York Golden Gloves but never have I ever fought in the big room. Now I can take this off the bucket list,” said Carrington, who won the 2020 U.S. Olympic trials but never got to compete in the Olympic qualifiers due to the COVID-19 pandemic.

The fight will cap his first full year as a professional, which he says has been one extended growing process. Under head trainer Kay Koroma, Carrington has transformed into a mature professional and has continued to learn in the gym, sparring with more experienced fighters like Roman “Chocolatito” Gonzalez for his last camp while in San Diego.

“It’s cool to watch my first fight but it’s pretty cringey low-key because there are certain things I don’t do anymore that were habits back then. I’m more patient, I’ve always had a pretty decent shot selection, but now I’m honing in on it more. My accuracy and my patience, defense has been tightened up, knowing how to play the clock, knowing when to press the gas. Lot of small moves that make a big difference. This is just a year and I’ve improved so much,” said Carrington.

Despite being 25, Carrington says he isn’t in a rush to get to the top.

“I’m not a burning star, I’m not gonna just shine bright and burn out very fast. I’m gonna stick around for a very long time, and to do that I have to make sure I take my time,” said Carrington.

“I feel like in the next few years I’ll be ready for those championships and I’m gonna take over the division.”

First, he has to get past Tapia, a 29-year-old from Brownsville, Tex. who is coming off back to back wins since the loss to Wilkins. Tapia has never been stopped, and has decision losses to Shakur Stevenson and Vladimir Nikitin. A knockout win for Carrington would be a significant statement in front of his hometown.

“I’m not gonna call out a stoppage but we’re definitely gonna put on a great performance,” said Carrington.