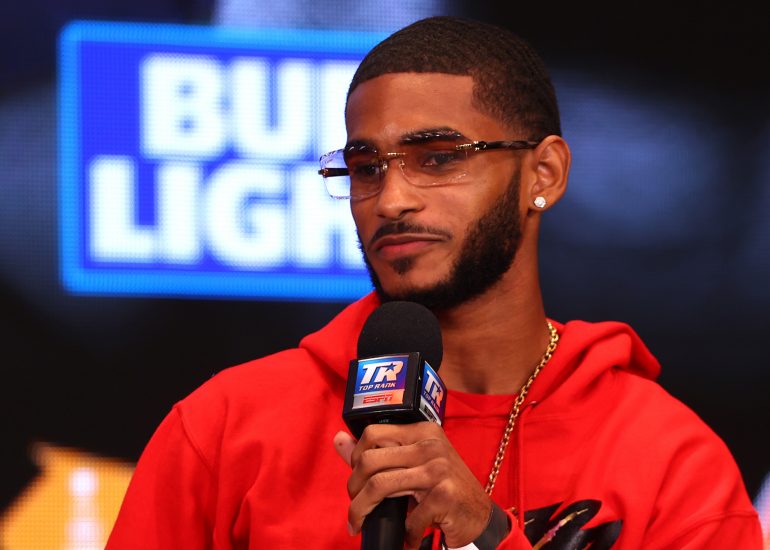 Tiger Johnson speaks during the press conference ahead of his October 29 welterweight fight with Esteban Garcia, at The Hulu Theater at Madison Square Garden on October 27, 2022 in New York City. (Photo by Mikey Williams/Top Rank Inc via Getty Images)
06
Dec
by Ryan Songalia

That’s the average time it takes a modern world champion to go from pro debut to their first world title opportunity, according to veteran manager David McWater. One of his latest proteges, Delante “Tiger” Johnson is stepping up to the eight round level for the first time as a professional this Saturday, taking on once-beaten Mike O’Han Jr. in a junior welterweight bout on the Teofimo Lopez vs. Sandor Martin undercard in New York City.

Johnson (6-0, 4 knockouts), who has been pro just one year since his quarterfinal finish at the Tokyo Olympics, wanted to fight an eight rounder by his third bout, but McWater says they’re in no rush. He trusts the matchmakers at Top Rank to develop the 24-year-old Johnson into a fighter who doesn’t just contend for a belt, but wins one.

“Guys can come out of the Olympics and they’re as good as all of the pros right then. What they don’t have is the experience,” said McWater of Split-T Management.

“If you look at [Johnson] from his first fight until now, he’s gotten so much more controlled. When he first came out there he was still fighting amateurish, just wailing away at people. Now he’s controlling everything. That makes him very dangerous.”

Johnson says he intends to show just how dangerous he is against O’Han Jr. (16-1, 9 KOs), a Massachusetts based fighter who has been pro since 2017, but hasn’t ever faced anyone like Johnson.

“From what I saw, I can see that he has nothing for me. We’re just gonna stick to our game plan and execute and hopefully I’ll get the knockout,” said Johnson of Cleveland, Ohio.

Johnson’s last bout, a six-round shutout over Esteban Garcia in October, was at the smaller Hulu Theater at Madison Square Garden, but Saturday’s fight will be at The Garden’s main arena, where some of Johnson’s favorite fighters once traded punches.

Johnson earned valuable experience in training for this fight, spending a week in Philadelphia to spar with rising star Jaron Ennis, the unbeaten welterweight who is considered by many to be a future pound-for-pound star.

“We went at it. It was like some really good, exciting work. I feel like it was a sparring session that everybody would have paid to see. I learned a lot sparring him. He’s very explosive and he has a high work rate. It was fun, they actually invited me to come back for more work,” said Johnson of sparring Ennis, who employs four-minute rounds in the gym.

“It helped me understand how much I’m developing as a pro fighter by him being a 12-round fighter and I’m barely getting into 8-round fights.”

Being in the spotlight means being subjected to criticism, but Johnson says he hasn’t let the scrutiny get him down. He says he uses it as motivation to improve, and looks to more experienced pros, like former champions and ESPN commentators Andre Ward and Timothy Bradley Jr., to get advice and feedback.

That doesn’t mean he doesn’t hear the criticism, though.

“I hear some people say that I’m not that good, or I’m overrated. Anything from people saying that I don’t have potential or that I’m not developing,” said Johnson. “I know that I can’t please everybody but I still want to change as many opinions as I can.”

There will be no shortage of rising prospects from Top Rank’s stable vying for attention on this Saturday’s undercard, with fellow U.S. Olympian Keyshawn Davis and hometown favorite Bruce Carrington set for action, but Johnson says he’s running his own race.

“I’m not in competition with anybody because that’s gonna come with any entertainment business. You’re gonna have some people that favor this person over you,” said Johnson. “Everybody’s gonna get their money’s worth when I step into that Garden.”

McWater sees 2024 as the year when Johnson makes his move in the junior welterweight division as he continues to perfect his craft under trainers Renard Safo and Prenice Brewer.

“I wouldn’t want to see him fight contenders in 2023, not because he can’t, but because there’s still things to learn. When you go in and beat those big guys, you fight a perfect fight. You don’t upset the best team by dropping passes or hanging a jab out there. You’ve gotta be perfect. There’s no rush with him, he’s been pro for a year,” said McWater.

That doesn’t necessarily mean Johnson will have to wait until the end of the decade for a title opportunity.

“Some of the guys like Teofimo and Shakur [Stevenson] got there in three years. I think he’s a more than average future world champion, so I think it’ll be faster than five years,” said McWater.