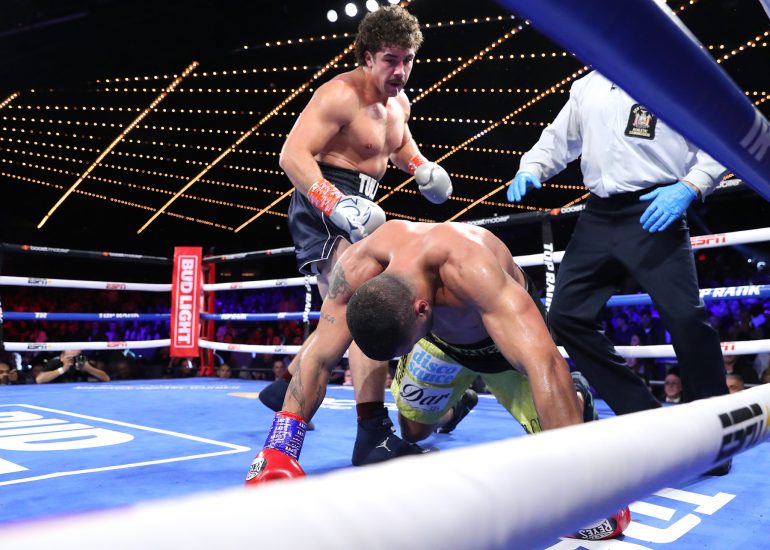 A number of 2020 U.S. Olympians had their chance to shine Saturday night in New York City, with Richard Torrez Jr. and Duke Ragan earning wins on the Vasiliy Lomachenko-Jamaine Ortiz undercard at The Theater at Madison Square Garden.

The main ESPN+ broadcast began with reigning super heavyweight silver medalist Richard Torrez Jr. (4-0, 4 KOs) keeping his knockout streak alive, stopping the overwhelmed Ahmed Hefny (13-3, 5 KOs) at 2:32 of the third round. The 23-year-old southpaw Torrez, of Tulare, Calif., dropped Hefny in each round, forcing him on the defensive from the opening bell. The referee took a point from Hefny for holding in the third round, but the stoppage moments later made that point a moot one.

The fight was the first time that Torrez had to fight past the second round as a professional. Hefny, 38, from Alexandria, Egypt, by way of Brooklyn, N.Y., had never previously been stopped. 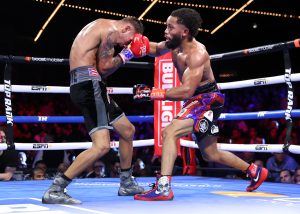 Middleweight Troy Isley (8-0, 4 KOs) of Alexandria, Va., went the distance in his first eight-round bout, outfighting Quincy LaVallais (14-4-1, 9 KOs) to a unanimous decision. The scores were 80-72 on two cards and 79-73 on the third, all for the 24-year-old Isley. Isley used lateral movement in close to land body shots and uppercuts from angles against the tough-but-outgunned Louisiana resident, who has never been stopped and went the distance with Xander Zayas in his previous biggest fight.

Junior welterweight Delante Johnson (6-0, 4 KOs) used his jab and combination punching to outbox Esteban Garcia (15-2, 7 KOs) to a shutout decision win. All three judges scored the bout 60-54 in favor of the 24-year-old Johnson from Cleveland who made it to the quarterfinals of the Tokyo Olympics.

Lightweight prospect Abdullah Mason (5-0, 4 KOs) impressed in his New York debut, dropping the previously unbeaten Angel Barrera (4-1, 0 KOs) with straight left hands to finish him off 21 seconds into the third of a scheduled six-rounder. Mason, a southpaw from Cleveland, won the 2020 USA Youth National Championships before turning professional a year ago.