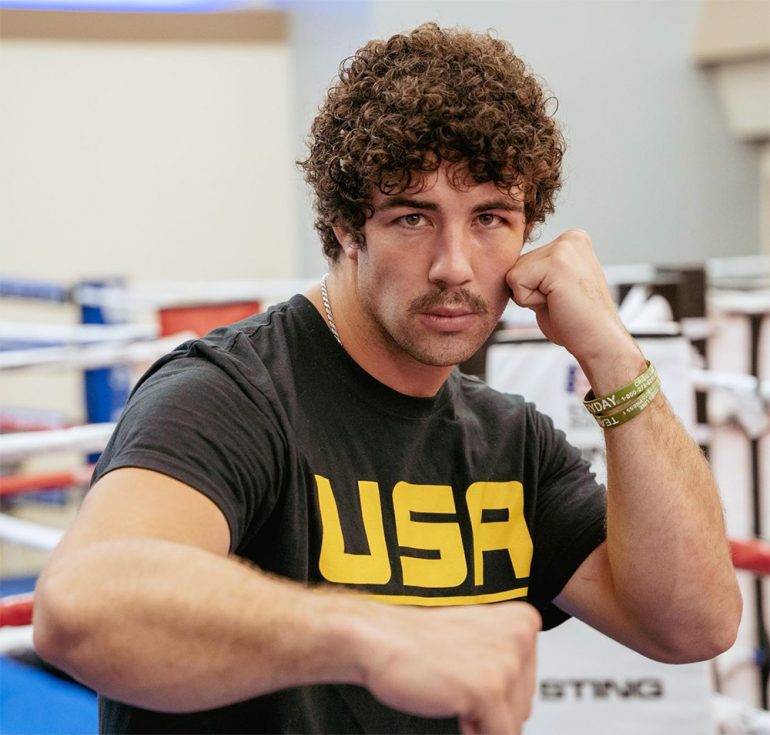 Back in September, Richard Torrez Jr. thought he would try something new. The 2020 U.S. Olympic heavyweight silver medalist is adventurous like that. This, however, was a little different. On a Tuesday morning, Torrez walked into a mirrored studio with a gym bag slung over his shoulder and his Olympic-rings tank top tucked into his sweatpants. As soon as he entered, he could feel the sideways stares with each step he took on the hardwood floor.

He found himself surrounded by stretching, pixie-like women and a few men in tights off to the side, leaping and seemingly floating on air.

“Oh man, this is crazy,” was Torrez’s first thought. “What did I get myself into?”

Welcome to “Intro to Ballet” at the College of the Sequoias (COS), in Tulare, California, in session each Tuesday, Thursday and Saturday from 9 a.m. to 10 a.m.

No one is going to call the 6-foot-2, 225-pound, third-generation boxer “Twinkle Toes” Torrez anytime soon, but the burgeoning 22-year-old southpaw is finding ballet incredibly intriguing when it comes to improving his balance and footwork.

That will be tested this Saturday when Torrez (3-0, 3 knockouts) takes on 38-year-old Ahmed Hefny (13-2, 5 KOs) in a six-rounder on the undercard of the Vasiliy Lomachenko-Jamaine Ortiz lightweight main event in the Hulu Theater at Madison Square Garden in New York (ESPN+ 10 p.m. ET/7 p.m. PT).

“I remember when I walked into my first [ballet] class and everyone was kind of looking at me, like, ‘Who’s this big guy?’ and thought why I was even there,” Torrez said. “But when the teacher came around and you start learning your plies (pronounced plee-ays) and échappés (pronounced ay-sha-PAYs), and you get one of the moves down, you’re like, ‘This is really cool.’ I got to some shuffle jumps and I began thinking that the moves really connected to boxing. Some of the moves are almost the same exact thing. A spin move, a shift in your weight — it all connects to boxing.

“It got kind of interesting. As I keep going and keep going, and since I’m a big dude in this class, the one thing I do a lot is throw the girls. I pick them up and throw them around. We have a recital coming in December and we’ll do it in front of all our friends and family. I can’t wait.”

In the meantime, Torrez has been training for his fourth professional fight.

He says the ballet class has provided more than just a way to improve his footwork; it has also been a great distraction from boxing. Torrez’s grandfather, Manuel Torrez, was the Southwest USA Golden Gloves champion, and his father, Richard Torrez Sr., tried out for the Olympics in 1984 and now trains Richard Jr.

“I like doing different things, and both parents are school administrators; my mom and sister are teachers and education is a high priority in my family,” said Torrez, who would eventually like to get a philosophy degree. “They’ve burned education into me since I was a little kid. I thought trying ballet was different. It’s really been an awesome experience. You have to know where your feet are always. I don’t feel sluggish and lethargic anymore after I eat.”

Between a new nutritional turn, ballet and tap dancing, Torrez’s body fat has gone done from 18 percent a year ago to 8-10 percent today. He plans on working his jab, utilizing feints and showing his tenacity against Hefny, who is 2-2 over his last four fights. Torrez also wants to work on angles and see how his footwork has improved.

In December, Torrez will be playing the gentle Beast character in Beauty and the Beast. On Saturday, Torrez is aiming for his inner boxing beast to surface.

But who knows where this ballet journey could go?

“Yeah, I could be in a world-class ballet one weekend, and fighting for a heavyweight championship the next,” Torrez said, laughing. “I just have to make sure to put the ballet tutu in the right spot.”