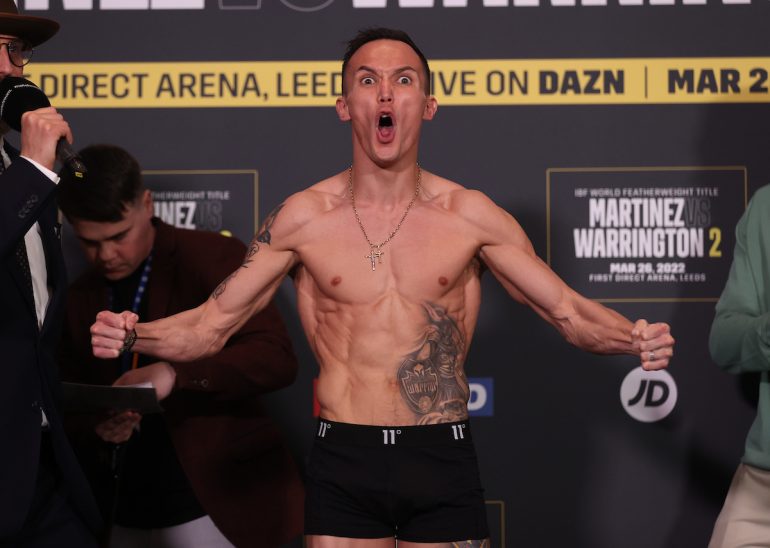 Josh Warrington has been forced to live in the future for several years.

Regardless of his achievements, accolades, big wins or anything else, the questions have been about his future fights, where the next event will be and now, it’s how long does the Leeds Warrior have left.

Because when Warrington burnt so brightly on the back of wins over Lee Selby, Carl Frampton and Kid Galahad, there was little but speculation of unification fights with Xu Can, Leo Santa Cruz and others, and a fight for the Ring title. Meanwhile, in Leeds, his fans were asking when they would get their trip to Las Vegas to support their hero.

It was always about what was coming up. That was until Mauricio Lara happened. Warrington concedes his eye was not on the ball for their behind-closed-doors early pandemic clash. Maybe he too was thinking of the bright lights of Vegas rather than a soulless, crowd-less fight with the then unheralded Mexican.

Even now, with Warrington preparing to face another Hispanic challenger, the conversation is consumed by his long-term future rather than the short-term and against 29-year-old Luis Alberto Lopez at the First Direct Arena in Leeds on Saturday, December 10.

But that is fuel for Warrington’s fire. The 32-year-old champion still has ambitions that stretch across the Atlantic.

“This morning I woke up knackered and I had sparring and pads to do, but you remind yourself of who’s coming to the fight, what’s next, what’s on the line if you don’t come through, so it is pressure but at the same breath it’s an incentive,” Warrington admitted.

In that case, it’s positive. There are plenty of fighters who have achieved what Warrington has and run out of ambition and motivation, but the future is keeping him interested, keeping him honest in workouts and preventing him from cutting corners.

Yes, the stakes bring pressure and expectation, but they also come with the caveat that another defeat and all of those dreams could disappear into a cloud of smoke.

“I don’t want to end my career and think I never had my chance to unify,” Warrington went on. “There’s talks about Leigh Wood but with him only having the regular title, it doesn’t qualify as unification. There’s talks of [Mauricio] Lara, I’d love that fight and I’d love to put it to bed and he’s starting to say it’s all personal, but first and foremost I’d like to fight one of the champions, Rey Vargas, Santa Cruz, Navarrete if he’s till at featherweight. After that, your Leigh Woods, Lara III, I’d be open to anything.”

It’s not just Josh who wants to get Stateside, it’s his fans. He said he’d happily take second-billing on a Canelo card, that he’s happy to build his profile there the same way Ricky Hatton did – who fought Collazo, Urango and Castillo before the megafights came with Mayweather and Pacquiao. He was in Vegas for Frampton’s rematch with Santa Cruz and wants some of that action, yes for himself, but also for his die hard supporters.

“If I had a quid [dollar] for everyone who said, ‘Josh, are we off to America or what?’ I’d be doing alright, because so many have got passports and credit cards waiting and a lot of people have been there from the leisure centres to the Elland Roads and the Headinglys and I’d like to be there… and I know Eddie definitely wants to go there, so I’m hoping he can deliver it at some point next year. He’s the man with the connections in the States… I know he’d love to be in a bar somewhere stood there looking around seeing the fans going absolutely berserk… I’m pretty sure he’ll want it to happen. Let’s just introduce ourselves to the American public and audience, we might even get invited back.”

Warrington would like to fight a third time against Lara on a Canelo show, or take on WBC champ Rey Vargas.

But for a man who thought he could perhaps make it to British level when he turned pro, has he exceeded his own expectations? Would he be satisfied if the book closed on his career now?

“I always said when I started if I could get a house deposit, a car on the drive and that Lord Lonsdale Belt, that British title, then I’d be a happy man, and I did that at 22 or 23,” Warrington continued. “You set yourself goals of European and world titles and as a hungry fighter, you’re never really content. Maybe it’s something that comes when your career is finished and you sit back and think, I’ve done alright.”

He’s done better than alright. He’s turned the First Direct Arena into a modern-day fortress, he’s headlined in football and cricket stadiums and he’s already had his own documentary. But the future nags at him. It means he is not truly, deeply satisfied by his accomplishments.

“Yes and no,” he said, when asked directly. “I feel like my career was ready for the next push when I became champion again. I’ve gone well above and beyond anything I’ve ever dreamed of when turning pro at Huddersfield Leisure Centre in 2009. I’ve gone well beyond that. I’ve got a few more quid than I expected to have, but we’re still there.”

But Warrington is also at an age where it’s natural to ask how much longer he will go on for. Exit strategies in boxing are few and far between, and Josh hasn’t got a masterplan for a life without boxing yet.

“It scares the life out of me, retirement, because I’ve found boxing from being a teenage lad to where I am now, and it’s been very very good to me,” Warrington admitted. “I’ve also given a lot of myself to the sport, but you set yourself goals and mine is to unify the division. I think I’ll know the time to stop. At this moment in time, the fire is still in the belly and you have goals and ambitions.”

And then from retirement, we go back to unification and America, skipping out the inconvenience of Lopez this weekend in Leeds. He admits activity helps momentum and knows that’s been lacking in recent months and years, but he’s still got plenty he’s hoping to fit in.

“I don’t want boxing to retire me,” he concluded. I’ve read many boxing autobiographies and you want to be in a position where it’s you who dictates when enough is enough. That’s not to say if I do unify and go to Vegas then I won’t say, ‘Oh, I’d love to be a two-weight champion.’ But I think if I went to Vegas and unified the division, that would be me content, anything else would be a bonus. [I want the fans to say] do you remember when we went to Vegas to watch Warrington?’ A lot of people have said you’ve got to make it happen for us. Leeds United can take us around Europe, but they can’t take us to America. You can do that. Let’s have it. I’d be devastated if I never got the opportunity and that’s what gives me the hunger and the bit between my teeth to get through these fights, make sure I win and I’m closer to making it happen.”