Mauricio Lara bids to destroy Jose Sanmartin on his way to Navarrete, Wood and others 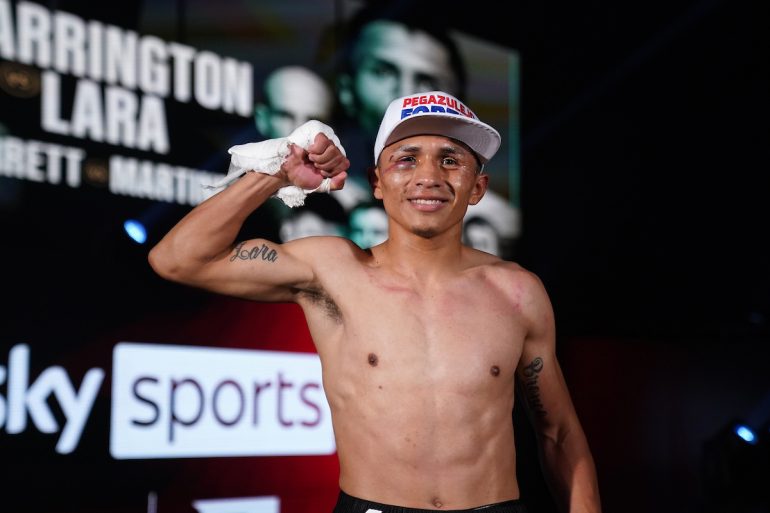 Mauricio Lara returns to action in Mexico City this weekend, hoping that victory over Jose Sanmartin will propel him into major fights.

Lara had been due to challenge Leigh Wood in Nottingham on September 24 but the Nottingham man withdrew after suffering a biceps tear, so Lara now gets 33-5-1 Sanamartin.

“I’m very excited and motivated to be here in Mexico City again,” Lara said. “Sanmartin is a strong fighter, but I am at my best so I’m going to destroy him.”

Lara said he is comfortable at the weight, and his goal is to reign as champion at featherweight. Then he will consider moving up. But he has plenty to do at 126lbs first.

“It was very sad for me,” he said, talking about the Wood withdrawal. “But things happen for a reason and I’m working hard right now and soon I will be fighting him [Wood].”

Because of the build to that fight and two previous contests against Josh Warrington in the UK, Lara is well known in England and it is somewhere he would like to fight more in the future.

“Yes of course,” Lara added. “England is my second home and they are two fighters I have on my list, so at some time I have to be back there.”

Does he have unfinished business with Warrington after their rematch ended early following a head clash, a disappointing technical draw after two rounds?

“Yes, we have a lot of business, I have a lot of unfinished business with him,” Lara continued. “With him, things are personal, not only inside the sport but personal with other things.”

One of Lara’s dreams in a showdown with The Ring’s No. 1 featherweight Emanuel Navarrete, someone Lara is familiar with.

“For sure. In the future we are going to fight and that fight is going to be a war and that type of fight is what we need in the division,” Lara explained. “I know him well. We have been in different camps together; we have sparred before and I know what he has and he knows what I have. We are friends.”

The talk of Wood, Warrington, Navarrete and anyone else is just that, though, until he gets by Sanmartin. Does that mean the pressure is on this Saturday?

“No, there’s no pressure at all and I’m excited about this fight and I know there are different levels between me and Sanmartin but I know he’s a good fighter,” said Lara. “I will go ahead with the experience I have gained in the last two years in England and the United States to win this fight, and then I will look forward to all the other fights.”

But it’s not just about big fights, titles and glory. Lara fights with a purpose.
“My goal is to secure my family’s future,” he said. “After two years without fighting here in Mexico, I’m excited to be in the corner and to look out and see the Mexican public and I’m excited to fight in front of my family.”