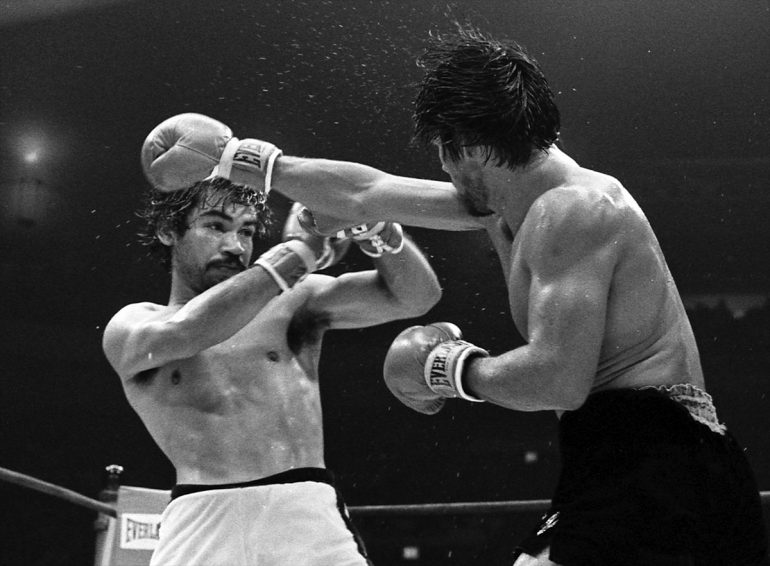 Carlos Palomino blocks a punch from Roberto Duran during their fight at Madison Square Garden on June 22, 1979. (Photo by The Ring Magazine via Getty Images)
06
Dec
by Anson Wainwright

By 1976, Carlos Palomino had established himself as an attraction in the Los Angeles area but still hadn’t gotten a chance to break through on the worldwide stage. In that year, however, he upset John H. Stracey in London to claim the Ring/WBC welterweight championship, and from that moment his journey to the Hall of Fame began.

Palomino, who was the third eldest of 12 children, was born in the small, rural town of Luis De Sanchez, Sonora, Mexico, on August 10, 1949. His early years were particularly difficult.

“Even though my dad had a job at a cotton farm, irrigating the cotton fields, it was difficult in Sonora,” Palomino told The Ring. “We lived in a house that was basically an adobe hut, which was provided by his boss. No electricity or water.”

His parents lost their first-born child, a boy, then had another son before Carlos came along. 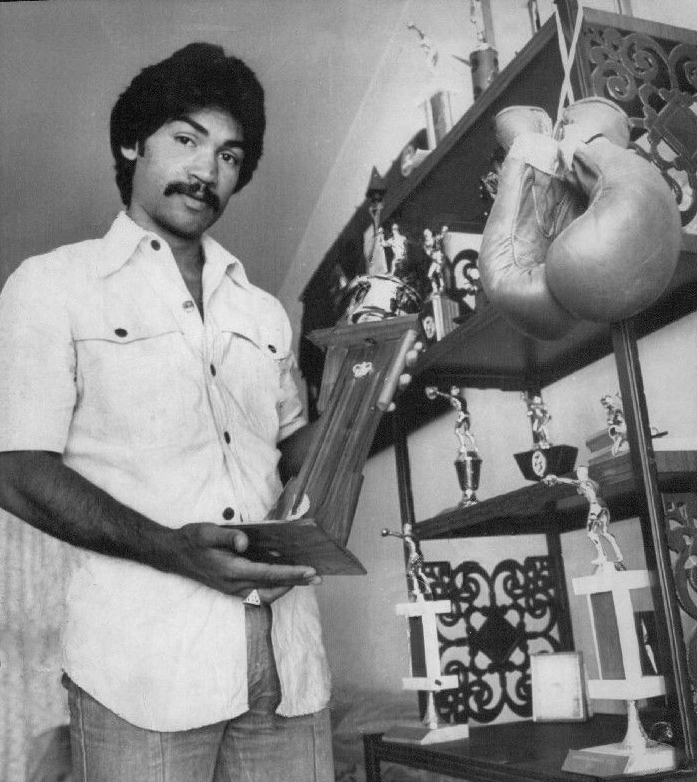 “My mom wanted a little girl,” he said. “At the age of 3, she started dressing me like a girl. She put dresses on me, let me hair grow to the middle of my back; she put bows in my hair.

“All the kids in the neighborhood would make fun of me because I was running around in a dress. So I was getting into scraps at 3 or 4 years old.”

His father was happy living in Mexico, but his mother wanted more for the family and convinced her husband that migrating to the United States was best for their family. They initially moved to Tijuana when Palomino was 7 and had to wait an additional three years to receive their green cards.

The family headed across the border and settle in in Santa Ana, California, after Palomino’s father found work in construction. Palomino didn’t speak English but picked it up and later graduated from high school.

He couldn’t go to college, because he had to help provide for the large family, so he worked as a welder. Carlos was drafted into the Army in 1970, during the Vietnam War.

Palomino’s brother, who had been drafted two years earlier, warned him of how hard life was in the Army. That led Palomino to join a nearby boxing gym to get into shape. His interest grew, and he would end up fighting in smokers at Chino Prison before reporting for basic training at Fort Hood. 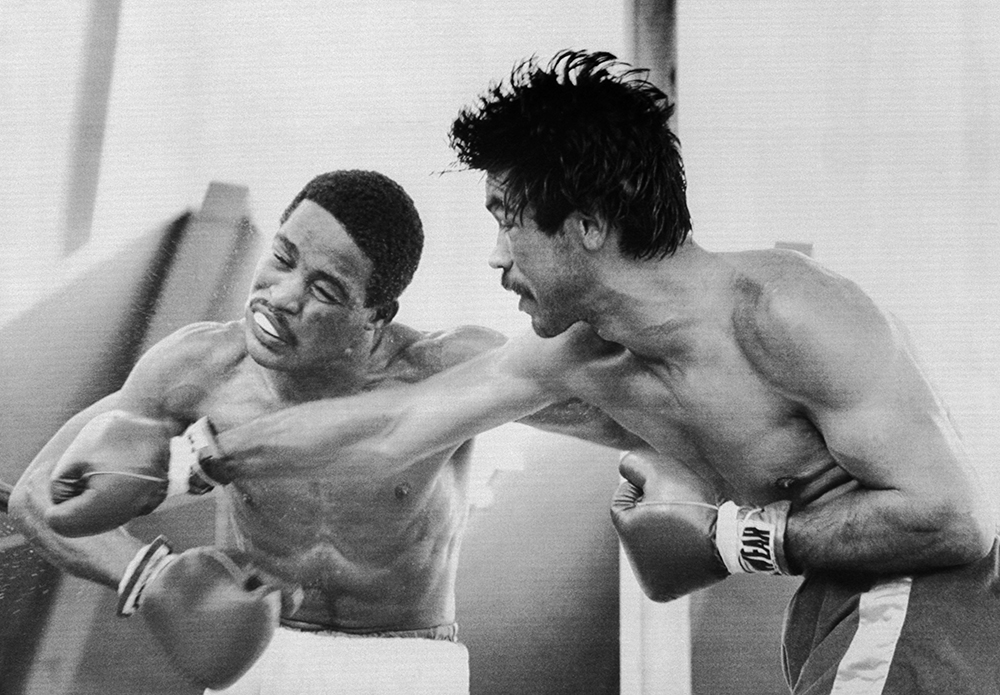 Wilfredo Benitez winces as he takes a shot from Palomino in 1979. (via Getty Images)

At the base, he decided to enter a tournament, which he won. He entered another competition between several bases and won that also. Eventually he would go on to win the All-Army championship twice, the all-service championship and national AAU title, beating eventual 1972 Olympic gold medalist Sugar Ray Seales. Palomino himself wasn’t able to represent the U.S. at the games, because he wasn’t an American citizen.

After the Army, Palomino returned to his old gym to see his trainer, Noe Cruz, who introduced him to renowned manager Jackie McCoy, who put him to work as a sparring partner for lightweight champion Mando Ramos. Palomino impressed McCoy, who quickly signed him to a managerial contract. 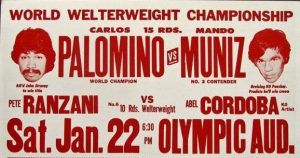 Palomino turned professional, earning a purse of $80, in September 1972.

“All my fights were at the Olympic Auditorium, [In-house promoter] Aileen Eaton was really good friends with my manager, Jackie McCoy,” explained Palomino. “[Eaton] wasn’t impressed initially. I won my first four or five fights on points and she said, ‘He has no power.’

“I learned to fight in the Army, just scoring punches. [The Olympic Auditorium fights] taught me to sit down on my punches; it took a little while. It wasn’t until later in my career that I learned to turn over my punches [and] started knocking guys out.”

Palomino had a hectic schedule, training and attending college and working part-time, and he suffered a setback in his 12th fight by losing to Andy Price (SD 10) in August 1974. He then drew with Hedgemon Lewis in November 1975 and was scheduled to fight a rematch six weeks later.

“Maybe three weeks before the fight, my manager (McCoy) gets a call from the promoter (Eaton) and says, ‘A promoter in London, Mickey Duff, would like us to let Hedgemon Lewis out of the contract, because they’re offering Hedgemon a title fight,'” Palomino recalled. “ [Eaton] says, ‘I’m going to work this in Carlos’ favor. I’ll release him from the contract if they guarantee Carlos a title fight against the winner.’

Stracey tore through Lewis in 10 rounds and then, as agreed, met Palomino in London in June 1976. Little was expected of Palomino, who was installed as a 10-to-1 underdog.

However, Palomino worked himself into fantastic shape and was able to surprise the defending titleholder with his physical strength, coming on strong in the second half of the fight to claim the Ring Magazine and WBC titles by 12th-round knockout.

“It was an incredible feeling,” said Palomino, who earned $10,000 for his title triumph. “Back at the hotel, my manager, trainer and me sat in the lobby, we called the manager and asked him to order food, and he said the kitchen’s closed, but he brought us some beers. We went to our rooms. I was trying to call home so I could talk to my parents, and I couldn’t get through. Every time I called, the phone was busy.” 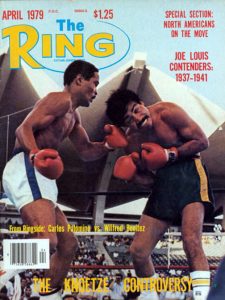 April 1979 cover of The Ring, featuring Palomino and Benitez.

Palomino made a promise to his mother that he would retire from boxing by the time he was 30. And so, over the next two-and-a-half years, he was extremely active, making seven successful defenses, notably beating old friend Armando Muniz (TKO 15 and UD 15) and Dave “Boy” Green (KO 11). He estimates he made a little less than a million dollars for all his title defenses.

He met the precociously talented Wilfred Benitez in January 1979.

“I was on for the fight. I pressured him, I landed a lot of bodyshots and was hoping to get his hands down.

“I thought I beat him, but I was in his hometown. Jackie McCoy [was] not a guy who screwed around — he always told me the truth about everything; he was very straight — and after the 15 rounds, he said, ‘You won the fight, but you’re not going to get it.'”

Although Palomino had a rematch clause, he was unable to enforce it and Benitez fought Sugar Ray Leonard instead.

“I saw him in his first fight at welterweight, and in my opinion, he didn’t look good,” said Palomino, who earned $250,000. “For my fight, he weighed in 145 pounds and I knew he was ready. I didn’t feel as a welterweight he was as powerful as he was as a lightweight.

“I tried to time him coming in [but] I was never able to catch him solid coming in. He kind of out-hustled me. His speed surprised me.” 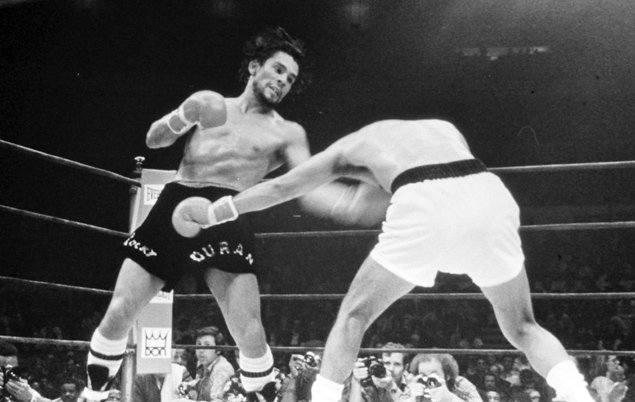 After losing to Duran by clear unanimous decision, Palomino walked away from boxing and expected to start working full-time at the Parks and Recreation Department in Westminster, California. However, when he was approached to work on TV show, Taxi, he turned his attention to acting and later appeared in Knight Rider, NYPD Blue and Star Trek: Voyager, among many other roles.

When his father passed away in 1995, Palomino returned to the gym with a heavy heart. He was persuaded by a fledgling promoter to return after a 17-year retirement, with the promise of four fights for a million dollars.

The former champion won them all, instead making $150,000. He was offered a fight with three-time welterweight title challenger Wilfredo Rivera, who beat him by 10-round unanimous decision.

“It was a competitive fight,” said Palomino, who at 48 was 19 years older than Rivera. “Halfway through that fight, I could hear my father in my head saying, ‘You’re done; you don’t need to do this anymore.’ I knew at the moment it was going to be my last fight.”

Palomino, who is now 73, has been married three times and has three children and eight grandchildren. He lives with his girlfriend in Brentwood, just east of San Francisco.

Hedgemon Lewis: His jab was like a whip. It was like Muhammad Ali’s jab; it was very fast and constantly in your face.

Wilfred Benitez: It almost seemed like he had a sixth sense and felt like he knew what was coming at him before the punches were thrown.

Roberto Duran: Duran, for sure. His handspeed was different than, say, Sugar Ray Leonard. It was more quickness. I remember he threw a right hand at me; I went to block it and he stopped the right hand in mid-air and hit me with a left hook. When he did that, I knew [he] was a whole [different level] of fighter.

Benitez: It has to be Benitez. His footwork was tricky; it was more like angles he used to avoid getting hit.

Duran: You can see him thinking as the fight goes along. ​

Armando Muniz: He used to wrestle in high school, so he had a different kind of physical strength.

Muniz: His neck was so thick that it looked like his head was attached to his shoulders. It was the reason why he could take shots all night long.

Zovek Barajas: Early in my career (1975), I fought a guy named Zovek Barajas, whose punches I felt were the hardest. Barajas had really heavy hands, so wherever he hit me, it hurt. He dropped me in Round 10 of our first fight. Because of the knockdown, the fight ended up a draw. I knocked him out in the rematch.

Benitez: He was very tricky. He moved in angles and was difficult to land punches on him. He had every shot in the book.

Duran: Duran was the best overall because he had a different set of skills. Fast hands and good feet, was very smart, could tell he was thinking at all times. He used lots of angles and feints to get you reacting defensively. So in the end, he’s dictating the pace and I was fighting his fight, not mine.