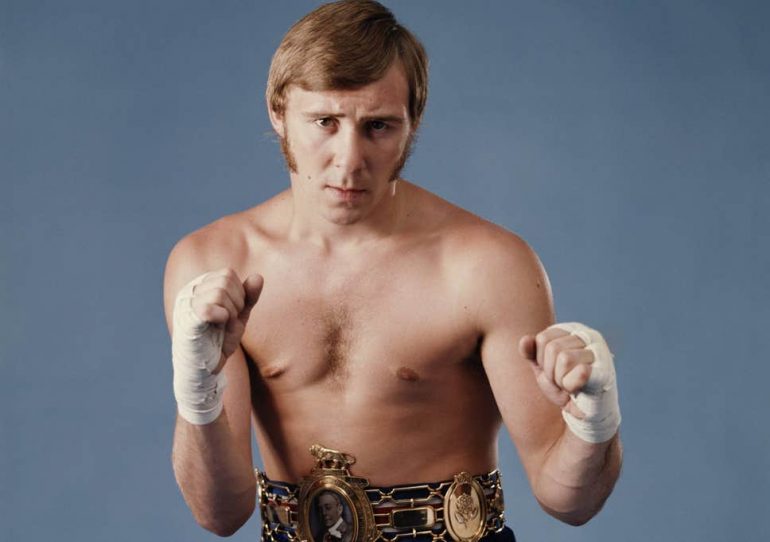 Stracey was born in Bethnal Green in the East End of London, the youngest of four children, on September 22, 1950.

“It was a tough time just after the war; you’re still on rations,” Stracey told The Ring. “Growing up on a council estate in Bethnal Green, I was always one of the lads getting in trouble. One thing you do is fight, I got into that, street fighting and doing silly things.”

Stracey’s father recognized he needed to find a better way for his son to express himself and took him to the Repton amateur boxing club when he was 11.

“I did all the skipping, shadow boxing, training, the exercises,” Stracey recalled. “I walked back to the flats where we lived and my dad said to me, ‘Did you enjoy it?’ I said, ‘Dad, I absolutely loved it, I want to box again.’ That was on the Tuesday night and I went back on the Thursday and Friday and that was it; I was hooked. It was something I loved.”

Stracey excelled, winning schoolboy and junior titles. He looked up to local hero Terry Spinks, who had won gold at the 1956 Olympic Games in Melbourne.

The young fighter continued to progress, and after finishing school he made ends meet by working as a messenger on the London stock exchange for a few years.

Stracey would qualify for the Mexico City Olympics in 1968 but lost to eventual gold medalist Ronnie Harris in the second round. An ABA title followed in 1969 and he would turn professional later that year. His estimated amateur record is 130 amateur bouts, with roughly 16 defeats. 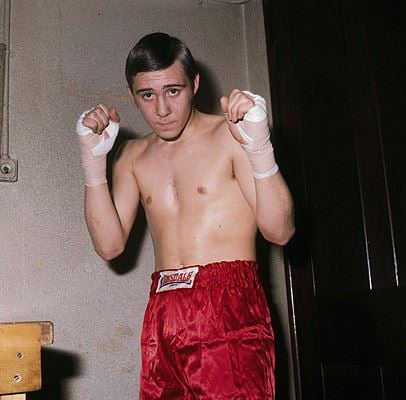 His services widely courted, Stracey signed with renowned boxing manager Terry Lawless. He won 22 of his first 23 bouts, the lone blemish was a draw (to Frankie Lewis), before being controversially outpointed by Marshall Butler over six rounds.

Stracey bounced back with three straight victories, but he was then disqualified in the seventh round of a vacant British title fight against Bobby Arthur for a dubious low blow.

“I caught him with a blow in the belly and he rolled on the floor holding himself saying he’d got hit low and I got disqualified,” Stracey said. “They made an immediate return, and within eight months I’d knocked him out in four rounds to get the title.”

In May 1974, Stracey ventured to France and stopped Roger Menetrey to add the European title to his collection.

The Napoles bout was next, but Stracey would have the daunting task of travelling to Mexico City to box in front of 40,000 hostile fans and a collection of Mexican officials.

Stracey had boxed in the Mexican capital years earlier and made the decision to fly out three weeks before the fight in order to acclimatize. He had also sparred with Napoles in London three years earlier and given him fits with the jab. Lawless felt this was the key to victory.

The challenger climbed off the canvas in the first round but roared back to drop Napoles in the third.

“He was cut, and I was catching him good style with the jabs, filling him up, ready to try to stop him,” remembered Stracey. “I was just about getting on top; Round 4, 5.”

Stracey stopped the legendary Napoles in the sixth round to achieve his boyhood dream. However, he was unable to celebrate his special moment in Mexico.

“We went out to a nightclub and they wouldn’t let me in because I beat their champion,” said Stracey. “We had to go back to the hotel after three or four tries at bars and different places.”

But it was a different story when the new champion returned home.

“The whole street in Bethnal Green was ‘Well done John H’, stalls with my poster and name across the road,” said the former champion. “We went straight to the town hall and had lunch with the mayor, made a speech and drove around the city where I used to work. They were magic moments; they’ll stay with me forever.”

In his first defense, Stracey overcame a difficult start to stop talented Hedgemon Lewis in 10 rounds.

He then met rugged Mexican-American Carlos Palomino. Stracey started well, but the challenger’s body attack took its toll and he was stopped in the 12th round.

Stracey fought twice more before retiring with a record of 45-5-1 (37 knockouts).

“I thought I’d had enough,” said the former champion. “I had a great career. I left my mark and was very respected. I was doing well with a hotel I owned in London and then I moved to Bournemouth. I always said to my mum I’d retire young.”

In the mid-1980s, Stracey realized how significant his title win was when he was invited to a lavish lunch to celebrate Jose Sulaiman receiving his honorary doctorate at the salubrious Cafe Royal.

“We walked in and there’s lots of fighters and people there,” said Stracey. “Everyone was going up, shaking his hand and when it got to me, he gave me the biggest hug. It was almost like I was his son and he was holding me saying, ‘You were my first champion!’ I didn’t even know. From there, wherever I went, I would always get the same thing, it was affectionate. He sadly passed away and I did the eulogy. I sang ‘My Way’ which was his favorite. It was incredible.” 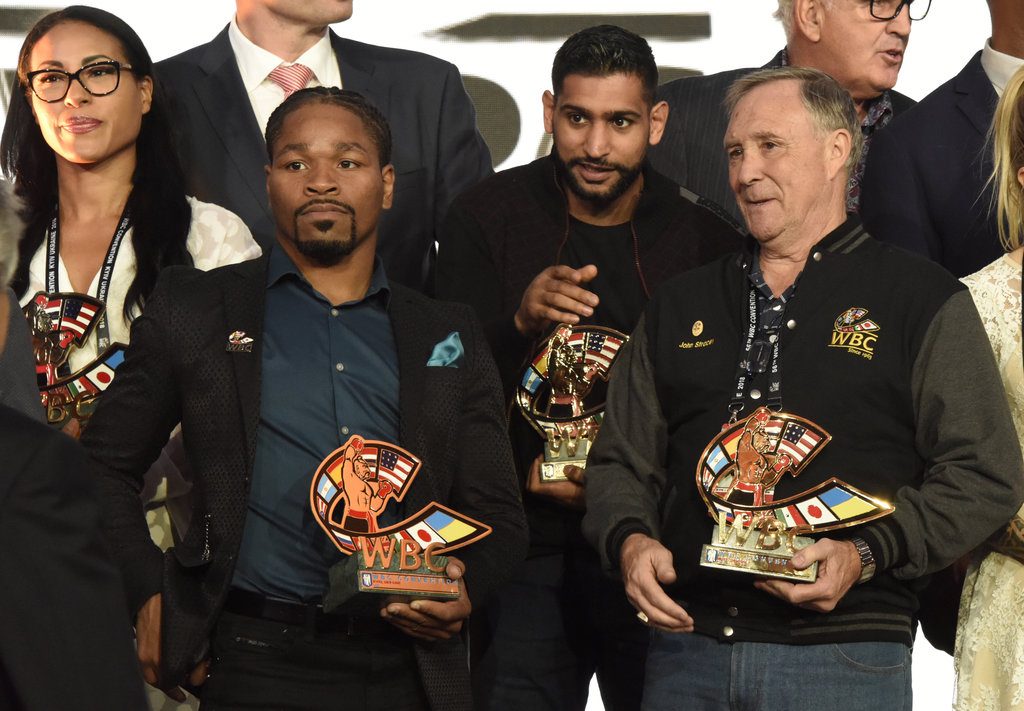 From left to right – Cecilia Braekhus, Shawn Porter, Amir Khan and Stracey at a WBC convention. Photo courtesy of the WBC

Stracey, now 68, is married and has four children. He lives in the Wirral and is the President of the Seacombe Allandale ABC. He is enjoying life and does cabaret at various events.

BEST JAB
Hedgemon Lewis: He could shoot out a good jab, and I had to really keep away from him. His jab was in my face, but then I stepped it up a bit by catching him with a left hook and pushing him back.

BEST DEFENSE
Ernie Lopez: It was like an official eliminator for the world title and I beat him in seven. He was taller than me and made me fall short with the jab; he just moved back. Eventually I got him; I moved him with a left hook, pushing him back to the ropes. He had a cut eye, but I was just making a move to get him, and the referee had to stop the fight.

BEST HANDSPEED
Roger Menetrey: He was quite a tall fighter and when they’re a bit taller than you, they’re gonna have a bigger reach. The left hand was coming out and I was trying to get under it every time, but what you do is acclimatize.

BEST FOOTWORK
Lewis: You think you’ll throw the jab and all of a sudden he’s gone. Lewis used most of the ring.

SMARTEST
Jose Napoles: Palomino beat me of course. He could adapt. I was catching him in the first couple of rounds and doing quite well, then he came on later. He’d obviously trained very hard for it. Napoles was smart, there’s not much between them. I’d say Napoles.

STRONGEST
Carlos Palomino: Palomino was very strong. Sometimes when you push, they don’t give and you think, ‘Woah, he must be strong.’

BEST CHIN
Palomino: I stopped 37 [opponents] out of [my] 45 [wins]. The ones who went the distance all have good chins. Napoles took a good shot, but I think Palomino had the best chin. I was hitting him early on and didn’t really get any change out of him.

BEST BOXING SKILLS
Lewis: He was a complete fighter; he was very unlucky not to be champion. Napoles was brilliant, he could disguise a punch.

BEST OVERALL
Napoles: Napoles was the best for what he achieved but Hedgmon Lewis was the hardest fight. Napoles because of his style; he could move that inch away from you and had power when you were exchanging.