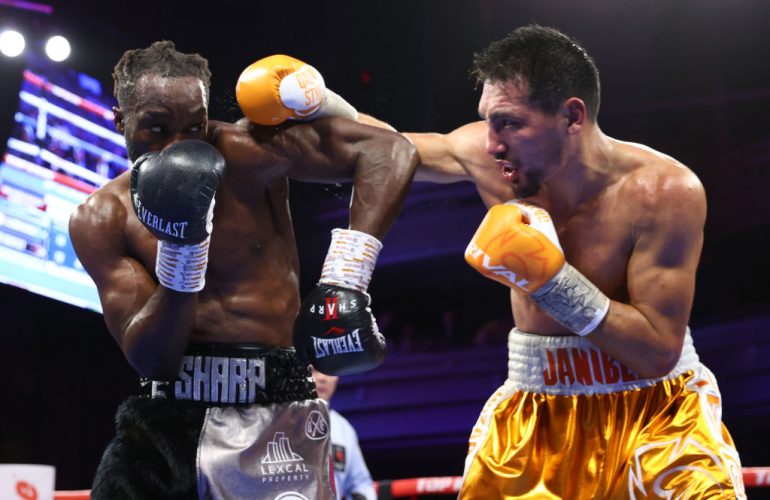 ESPN loudly touted Janibek Alimkhanuly as the “Boogeyman” of the middleweight division going into his WBO title defense against unheralded Denzel Bentley but if that was ever true, it probably won’t be after the 29-year-old Kazakhstan native struggled over the second half of a hard-fought 12-round decision victory on Saturday at The Palm in Las Vegas.

Alimkhanuly (13-0, 8 KOs) won by scores of 118-110 and 116-112 (twice) but Bentley (17-2-1, 14 KOs), a tough 27-year-old London native with solid fundamentals, had several strong moments. Early on, however, Alimkhanuly, The Ring’s No. 5-rated middleweight, appeared in firm command by dictating the pace and distance as he tagged Bentley with his southpaw straight left.

Bentley seemed hesitant, maybe even intimidated as ESPN’s Mark Kriegel suggested, but he was merely biding his time. The once-beaten British champion stepped up his offense in Round 5 and immediately found a home for his counter right hand, which landed as a straight punch and an uppercut with regularity for the rest of the fight. Bentley outworked Alimkhanuly in Rounds 6, 7 and 8, causing a real sense of urgency in the favored fighter’s corner, which was headed up by hall-of-fame trainer Buddy McGirt.

Alimkhanuly dug deep down the stretch, going tit for tat with Bentley but earning a slight edge (at least with the official judges) with his eye-catching one-two combinations and straight lefts. The 12th round was a big one for Alimkhanuly, who repeatedly stunned a still-game Bentley, who stood his ground during the final 30 seconds.

“Anything can happen in the ring,” Alimkhanuly said during his post-fight interview. “He came prepared. He was 100 percent, but I am a champion and I fought all 12 rounds as a champion.

“I am ready for any champion, for unifications. I am ready.”

Is he really? Is he ready for the middleweights The Ring rates ahead of him (Gennadiy Golovkin, Jermall Charlo, Demetrius Andrade and Jaime Munguia), or even the battle-tested contenders rated below him, such as Chris Eubank Jr. and Carlos Adames?

“Listen, he’s world champion, and I still say he’s the best middleweight.,” said the head trainer. “I’m taking nothing away from [Bentley] because he came and I told Janibek before the fight, ‘He has everything to gain and nothing to lose. So, he’s going to put it on the line.

“[Alimkhanuly] did what he had to do to retain his title.”

Bentley did what he had to do to earn the respect of U.S. boxing fans and media.

“That’s just peoples’ opinions. It’s just perception,” he said when Kriegel asked him about being a decided underdog. “You felt I was scared, I thought I was in the fight.

“In the fifth round, my coach told me we weren’t in front and to pick up the pace, so I picked up the pace.”