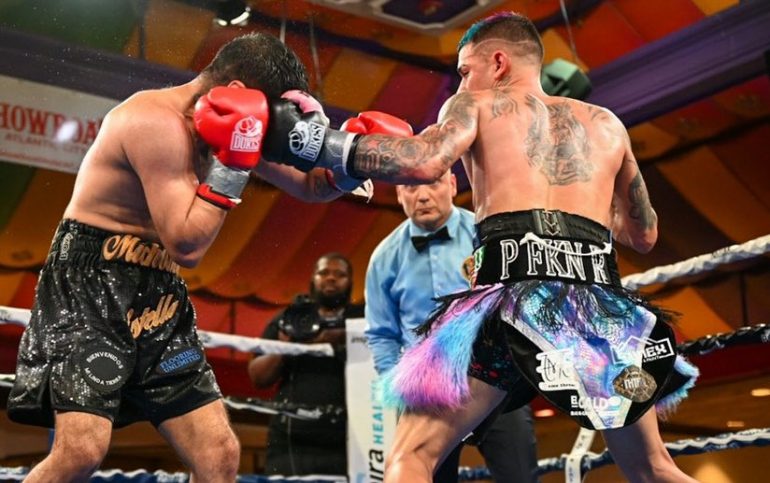 ATLANTIC CITY, N.J. — Manuel Manzo didn’t have the speed or skill that his opponent, Emmanuel Rodriguez, brought to the ring on Saturday night at the Showboat Hotel.

What the 33-year-old from Michoacan, Mexico had was an iron chin and a limitless gas tank. It also didn’t hurt that they were fighting several divisions above Rodriguez’s usual weight. Those factors were enough to power the underdog to an upset split decision win over the more celebrated “Salserito,” with two judges scoring the fight 76-75 in his favor, while the third had it scored the same way for Rodriguez.

The story of the bout happened about 30 hours prior to fight time, when Manzo arrived at the weigh-in well over the contract weight of 120 pounds. Rodriguez tells The Ring that he was informed about the discrepancy prior to arriving, and a new weight limit of 124 pounds was agreed upon. Manzo weighed in well above that weight too, stepping on the scales at 127.5 pounds, while Rodriguez, already rehydrated and wearing gold chains around his neck, weighed in at 124 pounds.

“Since the first round I just felt his body,” said Rodriguez (12-1, 7 knockouts), who estimated that Manzo (9-7-3, 4 KOs) weighed about 140 at the time of the fight. “I hit this guy with a whole bunch of punches that if he was a regular 118-pounder he would have been knocked out but I couldn’t move him.”

The difference between a draw or the decision going the other way was a fifth round knockdown on a left hook to the body. Rodriguez tried to box and pot shot his way to a decision but Manzo was effective in bulling his way forward and letting his hands go.

Promoter Thomas LaManna says there were issues bringing Manzo to the fight after his flight from California on Thursday was canceled, adding that he only arrived in town at 8 a.m. Friday, just hours before the weigh-in. He believes the chaos surrounding the travel situation contributed to Manzo’s weight problems.

Rodriguez says the lesson learned is to walk away from a fight if the opponent misses weight, even if it means disappointing his fans.

“That won’t happen again to me in my career again. I’m not taking it [if the opponent is more than two pounds overweight]. But he’s a great fighter, he did what he had to do,” said Rodriguez, who entered the bout rated no. 10 by the WBO and no. 13 by the WBA.

“We spoke in the locker room, I want to come back February, I would love to fight the same guy. I hope he can make 118.”

The loudest crowd reaction of the night came from the fans Kristian Prenga, the 6’5″ heavyweight from Orosh, Albania. Prenga exhibited Deontay Wilder-like power, scoring four knockdowns to finish off the overmatched and undersized Alvin Davie (7-4, 6 KOs) at the 1:32 mark of round two in the co-featured bout.

Prenga (12-1, 12 KOs) dropped the Miami resident with a pair of right hands in the first round. Twice Prenga had to be pulled down from the ropes after Davie rose up unexpectedly, but it was always just a matter of time. 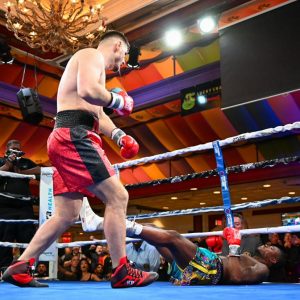 Prenga is now trained by Muhammad Sallam and has won seven straight since losing a decision in his fifth pro fight.

Rising junior middleweight prospect Robert Terry (8-0, 2 KOs) continued to flash his re-discovered punching power, registering his second straight knockout with a sixth round stoppage of experienced veteran Jimmy Williams (18-10-2, 6 KOs). Terry, 29, of Jersey City, N.J. weathered an early attack from the Plainfield, N.J. resident and dropped him with a left hook at the end of the fourth.

Terry, a 2017 National Golden Gloves finalist, had a difficult time maintaining his energy levels through the fights, but found enough energy later in the bout to finish Williams with a flurry of blows which began with a left hook. The time of stoppage was 2:22 of the sixth.

Starling (5-1, 4 KOs), a 5-time N.J. Golden Gloves champion, hadn’t fought in a year since suffering a torn left labrum in his previous fight, a second round knockout loss against Darryl Clark. In that fight, Starling took a knee after suffering the shoulder injury and was counted out.

The 33-year-old Starling of Neptune, N.J. almost didn’t make it to the ring after two opponents pulled out in the week leading up to the fight.

Hackett (3-22), a 36-year-old former welterweight from Philadelphia, took the fight on 48 hours’ notice, weighing in at 204 pounds, while looking comically undersized against the 287-pound, 6’5″ southpaw Starling. Hackett surrendered on his stool after the second round ended without being hurt in the bout.

Speaking of shoulder injuries, crowd favorite Saleh Ali had to overcome an injured left shoulder in the first round, but had enough toughness to outfight Jose Luis Fracica to a decision win. Ali (1-0-1), known as Habibi, used his right hand to counter the aggressive Fracica (0-3), and win a shutout decision of 40-36 on all three cards in their featherweight bout. 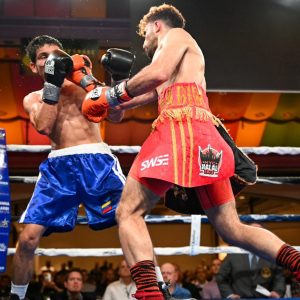 Junior middleweight prospect Justin Figueroa broke out “The Worm” for the second time in two pro fights, knocking out Jeremiah Kendrick (1-3, 1 KO) at 2:53 of the third round.

Figueroa (2-0, 2 KOs), a former football and wrestling standout at Holy Spirit High School in nearby Absecon, brought a sizable crowd to the arena. The athletic Figueroa, 23, got the experience he missed out in his pro debut, when he knocked out Tavares Smith in 90 seconds this past August and didn’t get to mix it up much. Figueroa showed his athleticism and movement before dropping Kendrick with a series of right hands and forcing a referee stoppage.

Justin Pauldo (15-1, 7 KOs) of Houston, Tex. overcame an early cut to outpoint Yeifer Valencia (6-2, 5 KOs) by the scored of 79-72 on two cards and 77-74 on the third in their lightweight bout. Pauldo, who is trained by Ronnie Shields, was fighting for the first time since his 2020 win over Josec Ruiz.

Jose Llano finished off matters early in his professional debut, stopping Gerald Fundenberg (0-1) in 81 seconds of their bantamweight fight. Llano, 28, is based in Hackensack, N.J. and is trained by Mike Rizzo.