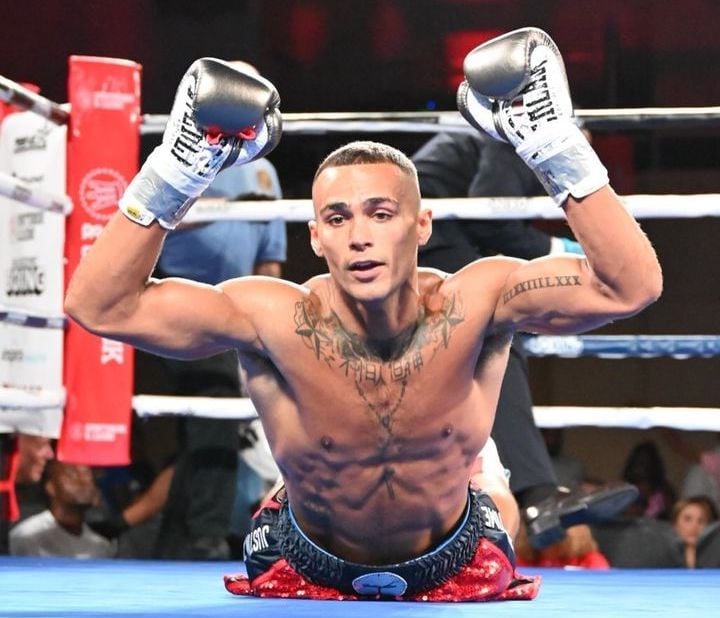 Figueroa performs "The Worm" after scoring a first round knockout. All photos by David Algranati/The Fight Photos
09
Nov
by Ryan Songalia

Justin Figueroa is no stranger to exchanging punches in Atlantic City.

The 23-year-old from the rough resort city in New Jersey first started boxing at the age of 5 after being jumped by about five other kids while playing outside. His father decided to keep him inside for the next two years, teaching him the boxing basics before allowing him to venture out after school.

“Two years later he let me out of the house and I was just kicking butt all over the neighborhood,” laughed the junior middleweight prospect.

Figueroa (1-0, 1 knockout) hopes to continue that streak of advantageous outcomes on the Boardwalk when he faces Jeremiah Kendrick (1-2, 1 KO) at the Showboat Hotel in Atlantic City on the undercard of a Rising Star Promotions card headlined by Newark bantamweight prospect Emmanuel “Salserito” Rodriguez.

Figueroa says he has done his homework on his Philadelphia-based opponent.

“I’ve been studying a lot of film tape on him. He looks ripped, he looks like he comes in shape, I respect any man that comes in the ring between those ropes,” said Figueroa. “I just don’t think he’s on my level and I don’t think it goes the distance.”

Figueroa is hoping his second outing lasts longer than his first one. Figueroa says he was just getting settled in when he dropped Tavaris Smith for the count about 90 seconds into their fight at Atlantic City’s Boardwalk Hall in August.

While victory was on the agenda, not everything about the night went according to plan. When the Ohio based Smith arrived at the venue, he discovered that he didn’t have his boxing shoes. Luckily for all parties involved, Figueroa had an extra pair of size 11s in his bag. 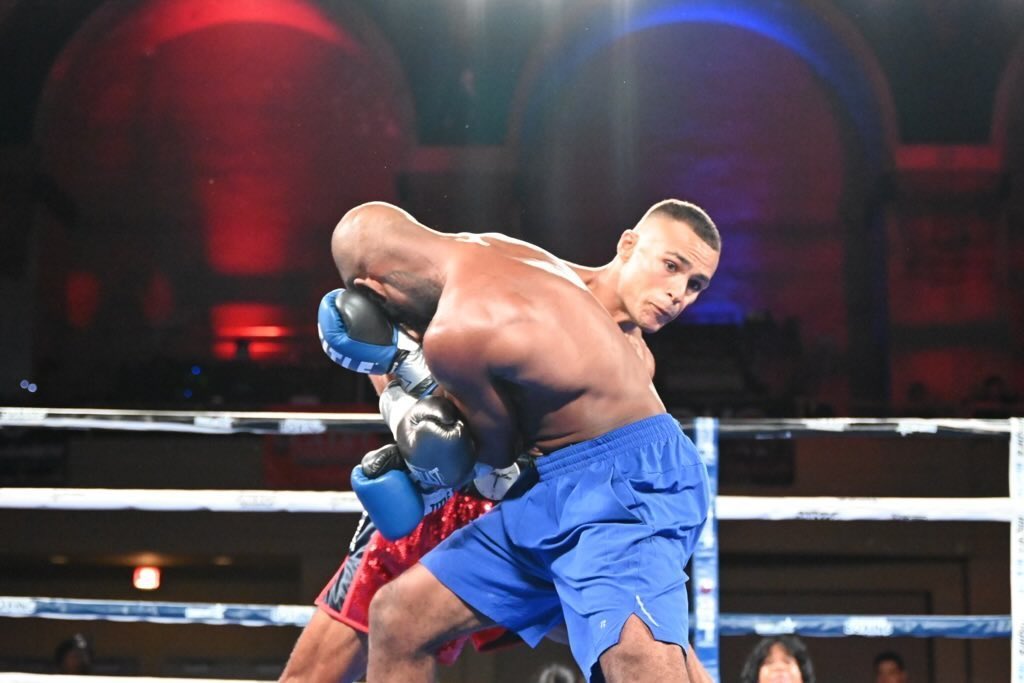 Figueroa also had to adjust to facing a southpaw in his first pro fight. His stance was only revealed when the bell rang and Smith came out with his right foot in front, Figueroa’s manager Jolene Mizzone says.

“The first thing that I said to myself is, ‘F—k,’” admits Mizzone, President of Fighters First Management.

“What impressed me, even though it was quick, Justin didn’t fold. He was as calm as could be and did what he had to do.”

The unpredictability of life has prepared Figueroa to make adjustments as circumstances change.

Figueroa had his first amateur fight at age ten after relocating to Tampa, Fla. to live with his uncle. He had approximately 12 bouts in that year, winning 11 of them, which was his first hint that he could have some potential as a boxer.

Boxing was placed on the back burner after he moved back to New Jersey for sixth grade. Football became his new passion, followed by wrestling. He competed in both sports for Holy Spirit High School in Absecon, just outside of Atlantic City, and dreamed of getting a full-ride scholarship to an NCAA Division I school. The running back/cornerback excelled on both ends of the field in his senior season, rushing for 785 yards and 10 touchdowns, while accruing 43 tackles and three interceptions.

A low grade point average dashed his collegiate football dreams, and with the football lifestyle of eating and lifting ballooning him up to 215 pounds, Figueroa looked to cut some weight.

That’s when he walked into the Atlantic City Police Athletic League Gym. He cut down to 178 pounds and ended a decade-long absence from the ring in 2018. He competed at a number of major tournaments, including the 2021 USA Boxing National Championships, and scored his biggest win at the Caroline Gloves tournament that year, winning a split decision over Nasheed Smith, who would go on to win the 2022 National Golden Gloves.

“I think I won about 8 out of ten bouts [after returning] and I said, ’It’s time for me to take this thing to the pro level and see what I can do,’” said Figueroa.

Mizzone, who spent decades as a matchmaker and vice president for the promotional organization Main Events, said she was impressed with Figueroa’s maturity outside the ring as much as she was with his acumen inside of it. She recalls her first meeting with him, at his lifeguard stand in Atlantic City, where he has worked for the past six summers as part of the beach patrol. She says she liked how he took out a notepad and had questions of his own to ask.

“The thing that impressed me a lot about him is his determination and will to want to be champion…to not chase that money. He wants to choose his legacy,” said Mizzone.

Mizzone says she is taking his career one fight at a time, collecting input from Figueroa and his trainer Arnold Robbins before planning out 2023 after Saturday’s performance. Figueroa says he expects another big hometown crowd to be cheering him on, and to perform “The Worm” after he scores another knockout.

He just hopes Kendrick remembers to bring his own pair of shoes.

“When I walked out for the last fight and I heard this big roar from my friends and family, it just touched my heart and I was so motivated that everyone got to come out and show some love. That sent some electric shocks through my body,” said Figueroa.